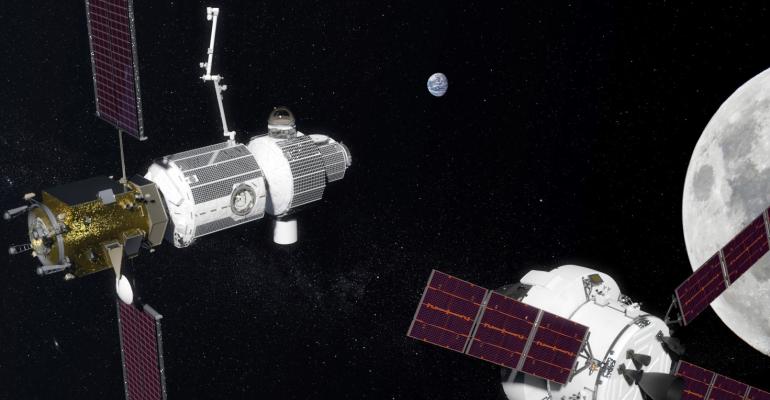 Start Slideshow ›
<p>It's easy to think NASA has fallen on rough times. In May the White House proposed a fiscal year budget of about <a href="https://www.nasa.gov/news/budget/index.html" target="_blank">$19.1 billion</a> for the agency for 2018, down $560 million from the 2017 budget. Among other items, the proposed budget cuts include closing NASA's Office of Education, a move that has gathered bipartisan <a href="http://spacenews.com/house-members-criticize-proposed-nasa-education-and-earth-science-cuts/" target="_blank">backlash</a>, as well as plans to shutter the Asteroid Redirect Mission (<a href="https://www.designnews.com/automation-motion-control/nasa-s-asteroid-redirect-mission-innovative-or-waste-time/145995529031253" target="_blank">ARM</a>) and defund the Restore-L project to service satellites in space. NASA has said it will shift its efforts from ARM toward developing solar-electric propulsion for spacecraft.</p><p>In a statement released on the budget Robert Lightfoot, Acting Administrator at NASA, remained optimistic saying, “We’re pleased by our top line number of $19.1 billion, which reflects the President’s confidence in our direction and the importance of everything we’ve been achieving.”</p><p>Lightfoot also said the new budget would not deter NASA's plans for a Mars mission. “We’ve had a horizon goal for some time now of reaching Mars, and this budget sustains that work and also provides the resources to keep exploring our solar system and look beyond it,” he said. “... We can’t do everything, but we can certainly do a lot.”</p><p>Back in April, during a keynote at the 2017 <a href="http://esc-boston.com/?_mc=arti_x_dnr_edt_aud_wiltz_dnr_des_08_x-ESCBoston17NASA" target="_blank">Embedded Systems Conference</a> (ESC) in Boston, Jason Crusan, Director of the Advanced Exploration Systems Division within the Human Exploration and Operations Mission Directorate at NASA, was also optimistic about the agency's work. “We have more development going on at NASA than ever in the history of the agency,” he told the audience.</p><p>With the International Space Station in Earth's orbit for over a decade and longer-term ambitions of landing humans on Mars by the year 2030, NASA has been developing new systems and technology around everything from 3D printing, to virtual reality (VR), and even biology, the general public just may not know about it. </p><p><strong>Click through to see 7 of the greatest innovations NASA is working on to usher in the next era of human space exploration.  </strong></p>
Despite what you might have heard, NASA is harder at work than ever. We take a look at seven technologies NASA is developing to take humans to Mars and beyond.