Home>Industry>Aerospace
Recent
Industry
Want a Career Jumpstart? Try the SWE's Advance Learning Center
Jun 11, 2021
Flowmeters in the Cloud and Roller Screws on Mars? Nice Supplier News
Jun 11, 2021
Challenged by Product Design? Check Out These Wins to Gain Inspiration
Jun 11, 2021
Friday Funny: Want to See Weird? This Robot Snakes into Strange Places
Jun 11, 2021
Want 20 Ways to Laugh? It Works Best if You're an Engineer
Jun 10, 2021
The Top 10 Semiconductor Companies on our List of Critical Companies to Watch
Jun 09, 2021
The Big Shift in Healthcare—Is Medtech Ready to Help?
Jun 08, 2021
Medical Molder Brings Mold-Making in House, and Customers Are Lining Up
Jun 08, 2021

Getting different types of spacecraft to Mars may require multiple fuel types. NASA is using 3D printing to try out a rocket engine turbopump design that can handle both liquid methane and liquid hydrogen propellant. 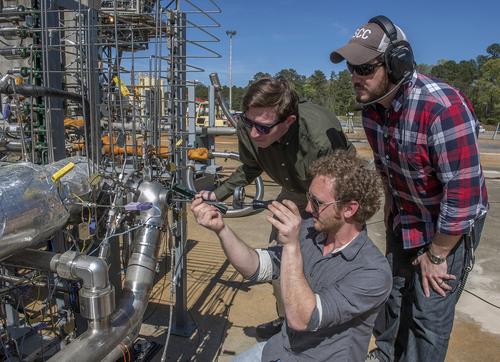 Engineers prepare a 3D printed turbopump for a test at NASA's Marshall Space Flight Center. The turbopump was tested at full power, pumping 600 gallons of semi-cryogenic liquid methane per minute, enough to power an engine capable of generating 22,500 lb of thrust. An engine with this technology is an ideal candidate for a Mars lander.
(Source: NASA/MSFC/Emmett Given)

Liquid methane could be an ideal propellant for several kinds of spacecraft, including Mars landers. It doesn't have to be cooled as low as liquid hydrogen -- 255 degrees below zero Fahrenheit instead of 400 degrees below -- so it doesn't boil off as fast, and can be stored for longer periods. Plus, methane rocket fuel can now be made from the abundant carbon dioxide in the Martian atmosphere. 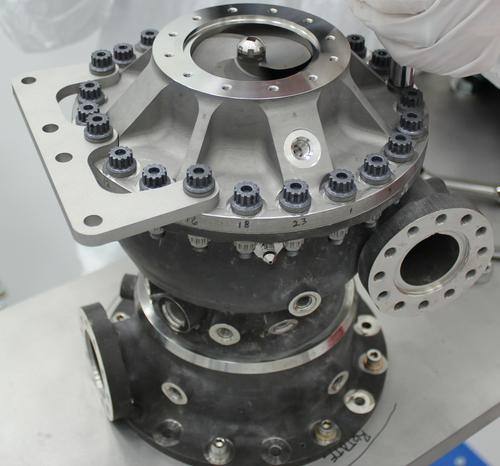 This rocket engine fuel pump has hundreds of parts, including a turbine that spun at over 90,000 rpm during testing last year with cryogenic liquid hydrogen propellant. This turbopump was made with additive manufacturing and had 45% fewer parts than pumps made with traditional manufacturing. It completed testing under flight-like conditions at NASA's Marshall Space Flight Center.
(Source: NASA/MSFC)

Simple enough. But engine turbopump design isn't, usually containing hundreds of parts. NASA says the 3D printed turbopump is one of the most complex rocket parts the agency has ever tested with liquid methane. The pump's turbines spin so fast that, during the full power test at NASA's Marshall Space Flight Center (MSFC), they generated 600 hp at 36,000 rpm, while the fuel pump delivered 600 gallons of semi-cryogenic liquid methane per minute. That's enough to power an engine capable of generating 22,500 lb of thrust.

Turbopumps that work with liquid methane have to spin at a different speed to compensate for that fuel's greater density compared to hydrogen, yet the pump design works with either. Because 3D printing made it possible to build the pump using 45% fewer parts, Marshall's engineers could build two of them and test them side by side for both fuels.

As you can see from the very short video above, during this full power test methane is burning out of the flame pipe at the end of the test area. As the fuel must be super-cooled to -255F, frost forms on the outside. In addition, engineers put the pump through three other tests at low power levels while burning liquid methane.

For the liquid hydrogen fuels, NASA had already tested the turbopump design last year under flight-like conditions at Marshall. The design was also tested with a liquid oxygen/liquid hydrogen breadboard engine. The engineers' next step will be testing the liquid methane turbopump in a configuration similar to the one used for last year's liquid hydrogen tests, including how the pump operates with other 3D-printed engine components.

This is all part of a larger effort. NASA, and others, have been working for some time to build rocket engine components, and sometimes even entire rocket engines, using 3D-printed parts. The agency has built and tested multiple parts, including one 3D printed from copper.

Want an Extreme Engineering Ride? Follow Maxon to the Moon and Mars
Jun 02, 2021