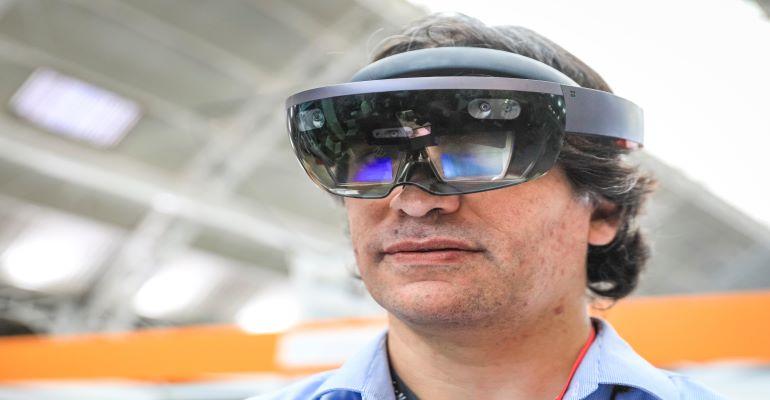 The battleground for display advances in recent years have been in flat-panel TVs and smartphones. But the rapid growth of augmented reality and virtual reality (AR/VR) is triggering a corresponding boom in the demand for, and display technologies, for displays used in these headsets, according to marketing research firm Display Supply Chain Consultants.

The firm notes that annual revenue for AR/VR displays will reach $9.3B in 2027, in an updated forecast published in the Biannual Augmented and Virtual Reality Display Technologies and Market Report. This represents a compound annual growth rate (CAGR) of 58.8%.

“A lot has happened in a year, including several high-profile acquisitions and Facebook changing its name to Meta,” says Guillaume Chansin, Director of Display Research at DSCC and the report’s lead author. “Considering the expected growth in shipments for 2022 and 2023, we decided to upgrade our long-term outlook to better reflect the current trajectory.”

DSCC still expects that VR and passthrough AR will generate more display shipments and revenues than see-through AR. Meta has added some support for passthrough AR on the Quest 2 and more headsets will offer this feature in the near future.

Related: VR System Lets Users “Touch” One Another in the Metaverse 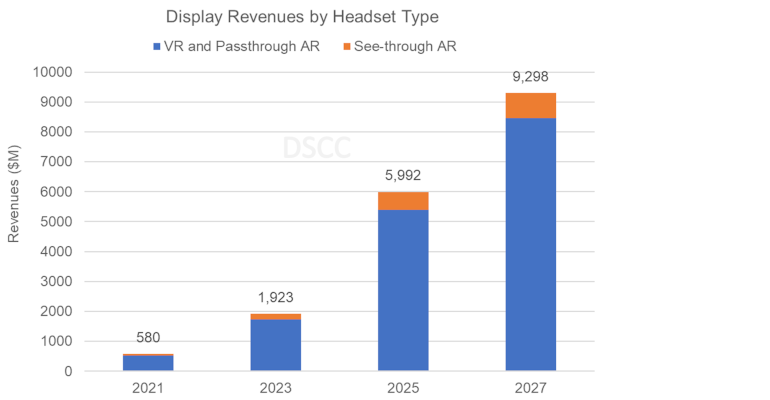 DSCC expects 2022 to be a pivotal year for AR/VR, as display panel shipments are projected to grow at a double-digit rate. Much of the growth will be in LCD (liquid crystal display) technology, which is currently used in most VR headsets, such as Meta Quest 2 or Pico Neo 3 Link.

So far, LCD technology is the leading candidate for designing into AR/VR displays. The technology can reach high pixel densities above 1000 PPI. Moreover, LCD displays allow using a short duty cycle, with the backlight on only about 10% of the time. For VR, this helps reduce motion blur and the associated motion sickness that some users can experience.

According to DSCC, future LCDs in VR headsets will increasingly employ MiniLED backlights to improve contrast. The firm noted that Meta is expected to launch a new VR headset with two MiniLED LCD panels later this year. The LCD panels will feature pancake optics that are lighter and smaller than the typical Fresnel lenses found on most headsets today.

The competing technology in AR/VR headsets is AMOLED (Active matrix organic light emitting diode). But due to its limiting pixel density of 615 ppi, AMOLED has not been designed into VR headsets over the past two years as design engineers have opted for high-resolution LCD panels, said DSCC.

But AMOLED displays are not dead. DSCC expects an AMOLED display with a pixel density above 800 ppi to debut in Sony’s PlayStation VR2. Also, research is underway on micro OLED technology, which can produce pixel densities beyond 2000 ppi.

Micro OLED technology is being used in a AR/VR headset Apple is planning to release. SiOLED has also been adopted in smart viewers with birdbath optical combiners, such as the Nreal Light or the Lenovo ThinkReality A3.

According to DSCC, the key challenges for SiOLED are to increase brightness and reduce cost. There have been significant investments in China to increase capacity. eMagin has demonstrated 10,000 nits on a full color SiOLED display. DSCC expects SiOLED to represent 48% of all AR/VR display shipments by 2027.