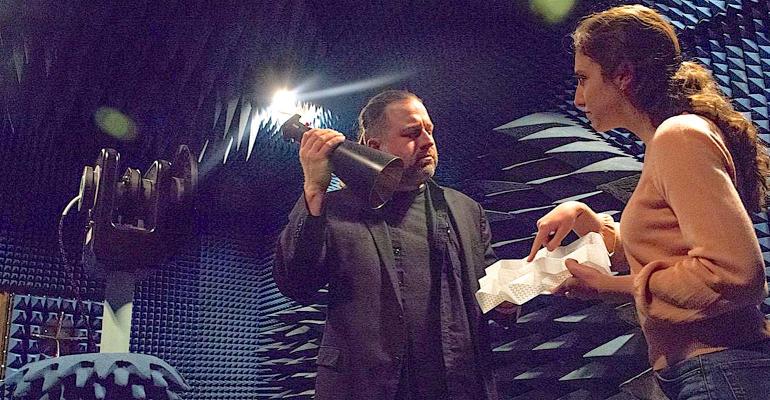 Greg Huff, associate professor of electrical engineering (left), and Deanna Sessions, who received her doctorate from Penn State in 2021, co-led a research team to create a first-of-its-kind methodology for diagnosing 3D printing errors with machine learning in real time.
An AI-based solution for identifying problems in real-time as a component for electromagnetic devices paves the way for fixing issues on the fly.

Researchers have developed a new framework to measure potential errors in precision, 3D printing, paving the way for more efficient and effective printing of parts for electromagnetic devices that can correct errors on the fly.

The new method can make printing for sensitive devices much more effective in terms of time, cost and computational bandwidth, they said.

“A lot of things can go wrong during the additive manufacturing process for any component,” Greg Huff, associate professor of electrical engineering at Penn State, said in a press statement. “And in the world of electromagnetics, where dimensions are based on wavelengths rather than regular units of measure, any small defect can really contribute to large-scale system failures or degraded operations.”

Because of this, “small adjustments really matter” when it comes to printing the parts, and even tiny flaws can ruin a component. This has led Huff and his team to experiment with numerous ways to identify errors during the printing of parts with the ultimate goal of fixing them before they get in the finished product.

A New Way to Diagnose Errors

Previously, the researchers had attached cameras to printer heads as a way to capture an image every time something was printed. This allowed them to collect and curate a dataset that they could combine with an algorithm to classify types of printing errors.

Developing this dataset and figuring out what information a neural network needed to diagnose errors in real time was key to the research, observed Deanna Sessions, who worked on the project as a doctorate student in electrical engineering at Penn State. She achieved this degree in 2021 and now works as a contractor for the Air Force Research Laboratory for UES Inc.

“We’re using this information — from cheap optical images — to predict electromagnetic performance without having to do simulations during the manufacturing process,” she said in a press statement. “If we have images, we can say whether a certain element is going to be a problem.”

Once the images were collected and curated, researchers set about trying to train a neural network to identify the errors that create problems in performance, Sessions said.

They found that they could, creating the artificial intelligence (AI) that is the essence of the framework. The result is a solution that, when applied to the print, can identify errors as it prints, researchers said.

The team published a paper on its work in the journal Additive Manufacturing.

Now that researchers have achieved this milestone of identifying errors in real time, the ultimate goal is to try to correct these errors during the printing process as well, Huff said.

“As this process is refined, it can start creating that kind of feedback control,” he said in a press statement.

In this type of system, researchers would get feedback on what a component is shaping up to be, and then make the appropriate adjustments so the printing process can continue and the correct part can be printed successfully, Huff said.