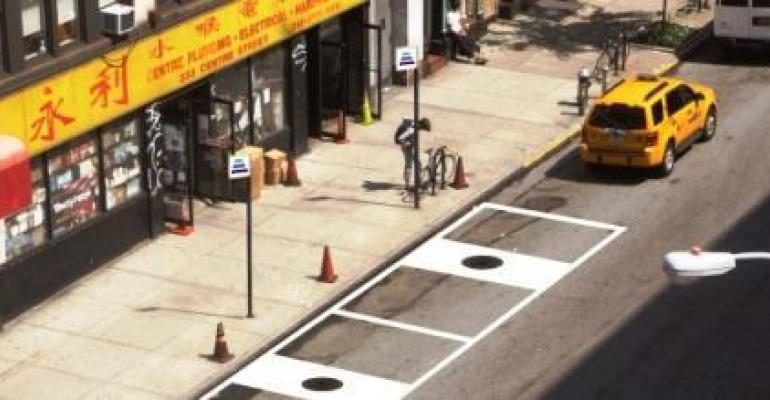 The chargers, weighing approximately 50 pounds apiece, will be embedded in the pavement and sit flush with the roadway. Electric vehicles that park above them will be able to recharge at power levels as high as 10 kW, meaning that a large plug-in hybrid battery could theoretically be refilled from 20 percent to 80 percent in as little as an hour.

"What we're making here is the fueling station of the future," Steven Monks, chief operating officer of HEVO Power, told Design News. "Drivers don't want to get out of their cars to charge up when it's raining. And many aren't comfortable holding a 240V line. This works better with their expectations of electric vehicle technology."

The Polytechnic Institute of New York University will use the devices to recharge the school's electric security vehicles. The charger package consists of transmitter and receiver units, including coils, capacitor banks, inverters, converters, and printed circuit boards. Transmitters will be located in glass composite containers in the roadway, while receiver units will be housed onboard the electric vehicles. The devices will recharge the batteries of parked EVs across an air gap via a magnetic field.

HEVO Power, a start-up launched in 2011, designed the chargers to be convenient and to offer the shortest possible charge times. Maximum power is 10 kW, but that figure varies from vehicle to vehicle. While some vehicles can charge at 10 kW, others operate as low as 1 kW to 2 kW. Charging times will therefore vary widely -- from an hour to many hours -- depending upon the operating power and the size of the vehicle's battery.

"Our target was 10 kW," Monks told us. "To have a really functional system, you've got to deliver at that rate."

Executives at HEVO Power said they expect to install more of the units around New York City. City officials like the idea of wireless charging, Monks told us. "City representatives thought that plug-in stations would not be tenable," he said. "In terms of liability, you have a plug-in cord dangling on the sidewalk. You have kiosks that clutter the area. And the units are subject to vandalism." Wireless charging systems have none of those issues, he said.

HEVO also expects to sell the technology to commercial fleets for so-called "green loading zones." There, delivery trucks could recharge during loading and unloading, theoretically packing as much as 10 kWh into the battery during a one-hour stop.

Although the chargers at New York University will look like manhole covers, that won't always be the case, Monks said. "They could be circular or rectangular or whatever the application calls for," he told us. "The shape will ultimately be driven by the needs of the customer."