Up Where the Air Is Thin 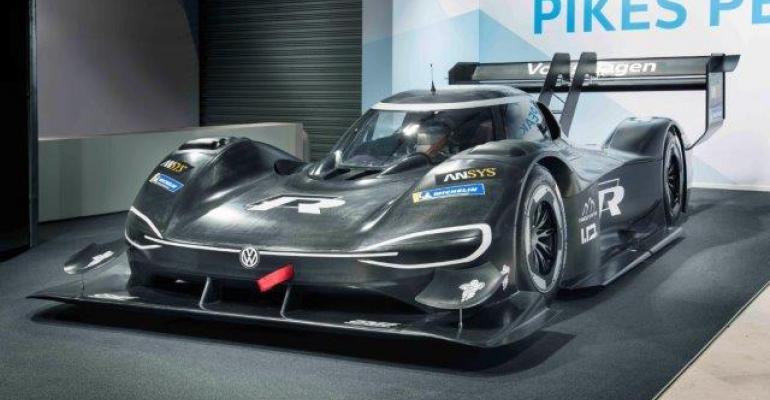 How using computational fluid dynamics (CFD) to build a Bonneville racer has helped me understand the challenges that will be faced by Volkswagen at Pikes Peak this year.

Aside from aerospace, it is hard to imagine a field that applies higher levels of practical technology than motorsports. In fact, many of the tools and techniques used in motor racing have come from aeronautics and aircraft design. This is especially true in aerodynamics, where computational fluid dynamics (CFD) simulations of airflow provide racing engineers the ability to develop a vehicle that optimizes both aerodynamic downforce and drag.

So when I decided to modify the bodywork for an electric land speed record vehicle, which was destined to be raced at Utah’s Bonneville Salt Flats, I knew early on that I wanted to leverage CFD. The Salt Flats are a vast, perfectly flat area where land speed records have been set for more than 100 years. The flats sit at an altitude of around 5,000 feet above sea level. My initial testing was done with a 1/10th scale model and eventually with the full scale vehicle in wind tunnels. These results gave me some design directions, but I knew that I would need CFD to more accurately characterize the vehicle’s performance in the thin air at the altitude of Bonneville.

Volkswagen Motorsport is facing the same problem that I did with my Bonneville racer, albeit on a much larger scale. The company is putting its final touches on the design of an electric competition car, with which they will compete at this year’s Pikes Peak International Hill Climb in Colorado at the end of June. The race course at Pikes Peak starts at an altitude just above 9,000 feet and travels 12.4 miles to the finish at 14,115 feet above sea level. VW’s car is called the I.D. R Pikes Peak. The company’s goal is to break the existing record of 8:57.118 minutes in the Pikes Peak electric prototype class.

Like I did, the VW team started out with wind tunnel testing to help optimize its racer. The VW team used half-scale wind tunnel models in the initial testing and were able to test the full-size vehicle at Porsche’s rolling road wind tunnel at its development center in Weissach in Germany. Porsche is part of the Volkswagen Group.

But the limitations of using a wind tunnel at sea level to develop a race car to compete above 9,000 feet were just as clear to VW engineers as they had been to me in developing a vehicle that was optimized for the 5,000 foot altitude of Bonneville. First, the reduction in air density at the summit of Pikes Peak (about 35% less than sea level) has a negative effect on the cooling efficiency. The two electric motors in the I.D. R Pikes Peak racecar develop a total of 671 horsepower (500 kilowatts). Even with the high efficiency of electric motors (>90%), there is still a lot of waste heat that requires a cooling system that lets in air, but doesn’t produce large amounts of aerodynamic drag.

“We could not manage this solely with data from the wind tunnel, where it is not possible to recreate the thin air,” explained François-Xavier Demaison, Technical Director at Volkswagen Motorsport in a company press release. Using the ANSYS Fluent CFD program allowed the VW team to optimize the cooling capability with minimal drag. “The simulation was a great help in determining the dimensions required for the cooling system,” Demaison added.

Volkswagen’s next concern was optimizing aerodynamic drag and cornering speed. Because my land speed record vehicle was only designed to travel in a straight line, I had been willing to sacrifice cornering speed for reduced drag and hence greater top speed. My objective was to make my vehicle travel through the air as smoothly as possible. But aerodynamic lift can be a dangerous thing at high velocities. Using CFD, I was able to design a small splitter at the leading edge of the vehicle, which produced slight amounts of downforce—even in the thin air at Bonneville—yet with minimal drag. By the time I finished, my effort with CFD studies resulted in a 30% reduction in overall drag compared with my vehicle’s starting point.

Volkswagen’s goal is not top speed, but cornering grip. At sea level, this can be accomplished with modest wings at the front and rear, creating enough downforce to press the car down onto the racing surface to maximize cornering grip. But the thinner air at Pikes Peak needed to be accounted for when designing the wings. With 35 percent lower air density, the wings on the car develop 35 percent less downforce than they do at sea level. As a result, they must be made much larger than normal. CFD played a role in the design of the huge rear wing—much larger than would be seen on a normal prototype racing car. “The huge rear wing allows us to compensate for some of the lost downforce,” explained Willy Rampf, a technical consultant to the project.

From looking at photographs of the Volkswagen hill climb car, it is clear that front downforce is being created by a huge front splitter design. Volkswagen claims that even with the thinner air, its car’s aerodynamics will produce downforce greater than the weight of the car during the hill climb run.CFD Advantage

Many different CFD programs are available on the market. Each breaks up the flow field into several million elements of varying size. The Navier-Stokes equations are solved for each of these elements hundreds or even thousands of times to determine an accurate representation of the steady-state flow of air over or through the vehicle. The advent of relatively inexpensive but extremely powerful computing has put CFD analyses capability onto high-powered desktop processors. As did VW for their simulations, I used the popular ANSYS Fluent CFD program for my land speed record analyses.

Some advantages that I found using CFD in an aerodynamic design study include:

Driver Romain Dumas has already been testing the Volkswagen I.D. R Pikes Peak in Europe. Dumas is a three-time winner at Pikes Peak. The car weighs just 2,425 pounds, very light for a battery electric racecar. The front and rear axles each have an electric motor, providing all-wheel drive. The car’s top speed of 155 mph isn’t particularly fast for a sports prototype—an indication that the engineers are concentrating on cornering speed and not drag reduction. In any case, the sinuous Pikes Peak course, with more than 156 turns, places an advantage on acceleration and cornering over raw top speed.

I was able to set four FIM World Land Speed Records at Bonneville in 2017, thanks in large part to the CFD aerodynamic studies that I undertook. I have every reason to expect, given a generous helping of luck, that Volkswagen will be successful with its CFD optimized design and in its record attempt this year at Pikes Peak. As a fan of developing aerodynamic solutions using CFD, I’ll certainly be cheering for them.