Recent
How to Make Sure Your Digital Transformation Doesn’t Fail
May 18, 2022
The Internet's Grooviest Slideshow of Legendary International Scouts
May 17, 2022
Electronics Industry Bolsters Root of Trust Security Efforts
May 17, 2022
3 Tips for Embedded Software Configuration Management
May 17, 2022
POLL
Novel 3D Printing Method Used to Replenish Coral Reefs
May 16, 2022
Volkswagen’s Electric Successor to the International Scout 4x4
May 16, 2022
The Music Is Over For Apple's iPod
May 16, 2022
Q&A With IndyCar Gearbox Expert Anna Chatten
May 13, 2022 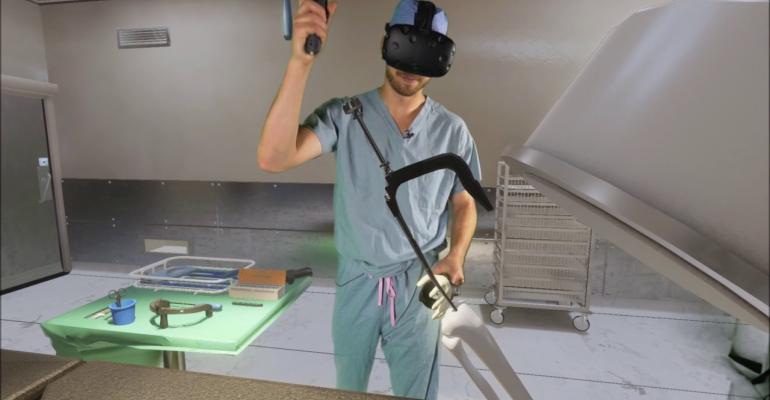 Osso VR has a question for you: How skilled is your surgeon, really?

Some medical technologies can require hundreds of uses before a surgeon becomes proficient with them. Typical surgeon training involves working with cadavers, but doing this only allows trainees one, maybe two, sessions' worth of experience. The rest of their training consists of watching videos and animations. Five to six months later they can get their first patient, which could be you or one of your loved ones.

How then can medical training be improved in a way that's both cost effective and yields reliable and verifiable results? According to Calfornia-based startup Osso VR, virtual reality holds the key to better training and outcomes for surgeons.

“VR provides an on-demand way to train surgeons and democratize techniques many surgeons may not have access to,”Leif Goranson, Director of Marketing at Osso VR told an audience at the recent Embedded Systems Conference (ESC) in Silicon Valley. “Today there are too many technique and complex procedures to keep up with emerging technologies.”

Osso VR was founded in 2016, the founders Justin Barad and Matt Newcomb both come from backgrounds as video game developers. Barad later transitioned to medicine – studying at UCLA and eventually becoming an orthopedic surgeon. Goranson said that during this time Barad saw the gaps in orthopedic training and came to understand that one-to-one training in clinics and with medical devices companies simply isn't very effective.

For starters there aren't any measurable metrics tied to medical training. “Cadaver training has no objective measurement tied to it,” Goranson said. “There's no way to tell if a surgeon is good or not good at the surgery yet. The reason for that is even if you survey surgeons after a course or lab sessions they don't give objective measurements of themselves.”

Using VR on the other hand allows Osso VR to capture a number of metrics via its software – all of which can be key performance indicators. “VR measures every finite movement in the space such as arm movement, trajectory, speed, and how instruments are manipulated,” Goranson said.

Validation tests done with UCLA found that students trained with Osso VR's virtual training system showed double the performance scores of those who were traditionally trained.

Osso VR isn't a hardware company. Instead its platform of choice is the popular Oculus Rift headset and its corresponding touch controllers. Osso focuses on creating the virtual surgery environments, which it does with an in-house team of medical illustrators and programmers. Not surprisingly for a company founded by game developers, the environments are built using Unity, a popular engine for creating both VR as well as standard console and computer video games. Each environment is custom built to a client's specifications and specific training needs. Utilizing the Rift's controllers also allows the Osso team to add a degree of haptic feedback to the simulations.

Throughout his talk Goranson invited audience members to test out a sample simulation. None who tried seemed to have any difficulty with the setup or with following the simulation. Right now the Oculus Rift hardware is wired, but next generations are already promising inside-out tracking, which will allow the headsets and controllers to be wireless.Right now the company's primary clientele are medical device companies looking to better train surgeons in using their products. However, Goranson added that VR can assist the medical industry beyond training as well. “Imagine being able to do virtual R&D on a product,” he said. “Medical devices companies invest a huge amount of money and time in getting products to market. If you could bring the medical device into VR for testing you can compress that whole time frame.”

A lot of work is being done into control schemes for VR right now. Some, like Oculus, are looking to add greater degrees of freedom and responsiveness to controllers while more ambitious companies like Leap Motion and Chirp Microsystems are developing technologies that will allow users to use their bare hands to interact in VR. While he said their inability to control the direction of the hardware presented some challenge, Goranson was optimistic that as VR hardware continues to develop it will only make Osso VR's simulations that much more realistic and effective.