Recent
Mercedes-Benz Sustaineer Concept Electric Van Scrubs the Air While it Drives
Oct 28, 2021
Spooky Halloween Tech Is Here. Just Look at These Doozies
Oct 27, 2021
Halloween? What a Perfect Time to Think About Generating Electricity From Blood!
Oct 27, 2021
Ghosts of Medtech: What Ever Happened to These 7 Medical Devices?
Oct 27, 2021
POLL
How to Survive a Zombie Apocalypse
Oct 27, 2021
America's Supply Chain Crisis by the Numbers
Oct 27, 2021
Want Scary Stuff for Halloween? Check out the Tech for 2021
Oct 27, 2021
How Apple Influenced Medical Packaging
Oct 27, 2021

Turning Signal Integrity Simulation Inside Out 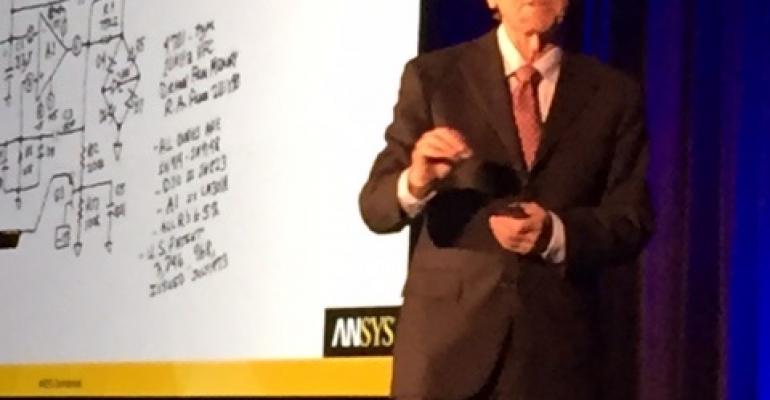 Dr. Zoltan Cendes, one of the biggest names in electromagnetic simulation, says its time for design engineers to take a new approach.

Waves ... electromagnetic waves everywhere. During his DesignCon 2017 keynote, Dr. Zoltan Cendes told the audience about a trip he once took down the Li River in China.

At some point Cendes' group came across another raft with people taking pictures. They were using digital cameras and portable printers to take pictures they would then sell to the tourists. “It occurred to me that these people were probably fishers at some point in time, but now they were using high technology to have a better way of life,” Cendes told the audience. “My point is, electrical engineers change the world in ways you wouldn't think.”

All that change however creates its own challenges. Industry leaders are demanding faster and more efficient processes. This in turn means design engineers need new applications and tools to meet these expectations and more intense schedules.

Within this, Cendes said, there's a huge opportunity to rethink signal integrity simulation. Cendes is no stranger to simulation. He's the co-founder of Ansys, a leading supplier of engineering simulation software, and one of the creators of HFSS, the popular software for simulating electromagnetic fields in 3D. What he suggested to the audience was that the only way forward for electromagnetic (EM) field simulation is to take an “inside-out” approach.

“Electromagnetic simulation has evolved to the point where we can turn it inside out by solving large EM problems with isolated nonlinear circuits,” Cendes said. “... Physics-based simulation empowers more engineers.”

What Cendes is talking about is, rather than the traditional method of signal integrity simulation – solving circuits first, and worrying about the physics later – taking a new, physics-based approach that solves the electromagnetic physics first.

Cendes said this physics-based approach will ease a lot of simulation duties and also allow for easier automation of tasks. “Connecting things together is difficult manually, so you want to automate the workflow,” he said. “It allows you to do things more easily and also beyond that you don't have to be an expert to run the simulation.”

With this engineers can conduct more virtual prototyping, which reduces hands-on engineering time, eliminate error-prone systems wiring, and allows steps to be scripted in software. “In the old days you'd have to label every trace and make sure you're connecting everything correctly,” Cendes said. “Something like connecting 30 pins can take a long time. But the physics works very well. You can let the software figure it out.”

He also spoke of the advantages of the inside-out approach in terms of protecting intellectual property (IP). “Vendor models can be encrypted,” Cendes said. “You can encrypt components so your IP is hidden from others. In a traditional components every part is available to see. But as you simulate it, it will work exactly the same. The software knows the same geometry, but the encryption allows everything inside your device to be completely hidden from third party individuals.”

The advantages of physics-based simulation also extend beyond EM. Cendes' company, Ansys, believes thermal stimulation will be the next logical step. "[With physics-based simulation] you have the ability to solve integrated electro-thermal design and do electro-thermal mechanical verification,” he said. “You do an EM solution, then you get loses from currents (meaning heating) that gives you the power that's fed into the thermal solver. [The thermal solver] gives you the temperature distribution. You can then feed that into the mechanical solver where the thermal effects on stress can be analyzed. And it can all be done in the same interface.”

Much like the people on the Li River transitioned from fishing to digital photography, Cendes imagines inside-out simulation having a similar revolutionary impact on design flow. He told the DesignCon audience it only makes sense as electronic devices become more and more integrated into our day-to-day world. “The world is physical, EM simulation needs to lead the way, with the circuit and system models driving electromagnetics and not the other way around.”