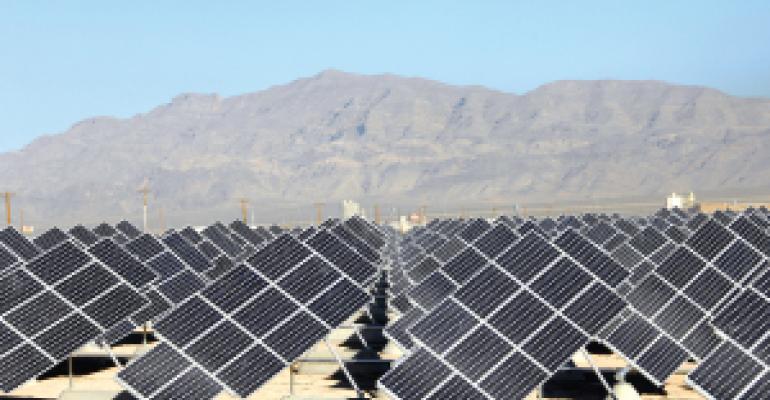 A new generation of Sun tracking systems are playing a key role in the emergence of solar power. But

the design challenge for engineers lies in the balancing of cost, ease of installation and the need for long-term reliability of these new systems.

Rapid prototyping and simulation provide tools for developing advanced control algorithms and more sophisticated two-axis systems emerging with the growth of concentrated photovoltaics (CPV). But the key for single-axis solar tracking control systems used in large-scale solar plants is still a fundamental focus on cost, installation and an expected product lifetime of 20 to 30 years.

The recent announcement of Reliathon(TM) by Suntech Power Holdings Co., a worldwide leader in crystalline silicon photovoltaic (PV) modules, underscores the need for long-term reliability as a key component in the viability of solar installations moving forward.
Reliathon is an integrated solar platform that offers product and business innovations to lower costs and accelerate the path to grid parity with the development of utility-scale solar plants. The goal is a system that combines module innovations, a new utility-grade warranty for the Suntech module and partnerships with industry-leading inverter and tracking companies Advanced Energy, Array Technologies, Satcon, Siemens Industry and SMA.

"We have focused on the horizontal single-axis tracking solution for utility PV power plants because it allows us to use one motor to control up to one-half a megawatt of PV panels. It's a very simple, robust system that uses 480-volt three-phase motors, minimizes the maintenance points and is built for 30 year low-cost, reliable operation," says Ron Corio, president of Array Technologies.

What makes the DuraTrack solar tracker unique from other companies in horizontal axis tracking for the utility market is the drive system. Other horizontal tracking systems use a push/pull linkage to move many rows with one linear actuator or motorized drive, while Array Technologies' design uses a rotating drive linkage.

The drive linkage is small, lightweight and uses articulating joints. The use of articulating joints eliminates the need to grade the land, allowing the systems' rows to be installed over the contour of the terrain. It makes the system easier to install, and maintains the flexibility of individual motorized units while minimizing the cost, complexity and maintenance.

The system uses a horizontal beam mounted north to south with a gearbox in the center. The rotating drive line runs perpendicular to the rows to rotate the panels from east to west on a horizontal plane. The controller in the system is a PLC with a GPS input, and Array Technologies has used the unit's programming software to develop the application code. Algorithms based on GPS location, date and time plus celestial mechanics calculate the sun's position and appropriate position for the tracker.

After 20 years of tracker field experience, Corio says there is a huge growth in utility and residential systems but the main focus and the next big market everyone is looking at is in the U.S.

"Every variety of power plant has a different energy production profile and what is referred to in the utility industry as 'capacity factor,'" says Matt Campbell, director of utility products for SunPower Corp. He says a nuclear power plant might run at a 93 percent capacity factor versus 30 to 34 percent for a sun tracking power plant at a good solar location in the desert. In places like Florida it would be 25 percent; projects in Chicago might achieve 22 or 23 percent.
Optimizing the capacity factor by tracking basically keeps the panels pointed directly at the sun, so they are at full output. Tracking represents up to a 30 percent energy production improvement over panels on a fixed structure tilted
toward the south.

In terms of trends from a design standpoint, large solar systems pose a complicated optimization problem: the cost of the tracking system versus the gain in energy versus the amount of land the system uses.

SunPower single-axis trackers control the east to west rotation of the panels, and units come in two models offering a zero and 20-degree tilt angle. The company's T20 tracker is tilted at a 20-degree angle, and Campbell says that configuration results in the highest capacity factor for a one-axis tracker. But the downside is it also requires more land, so it gets into the optimization question and what a designer would do for a given project. "Sometimes it's more economical to tilt, even though it requires a little more land, and sometimes it's more economical to go horizontal," Campbell says.

A one-axis system features a simple galvanized steel structure and a 4-inch-sq torque tube that attaches panels to the posts driven into the ground to support the axis of rotation. The tube is installed through a bearing made out of a resin that doesn't require lubrication, and offers a life of 365 cycles times 30 years.

Rows are linked using an actuating beam or drive strut. Think about it as a Venetian blind, where one beam moves each row element together in parallel. At the end of the drive strut actuating beam, there is a .50-hp motor controlled by a programmable logic controller. A GPS input tells the tracker the time, date, latitude and longitude, and the controller uses an astronomical tracking algorithm to calculate the position of the sun.

"One motor can move up to 300 kilowatts of panels and creates a very cost-efficient design," Campbell says. "As a designer of a system like this, you are really trying to reduce cost as much as possible whether it's in the structure or the controls."

He says one of the biggest challenges is making the customer with long-term assets comfortable that the system will run reliably for 30 years or more. But building tracking systems are also normally permitted under local building codes designed to protect the lives and safety of people.

Design for permitting, along with low cost and fast installation, becomes an even bigger priority with the move toward construction of larger, central station power plants. With trackers on plants on a scale from 100 MW to a gigawatt, there is another round of design criteria that comes into consideration with the larger span of land.

"Because of the scale of the renewable challenge in front of us from a climate change perspective, we will need PV delivering at all scales in parallel," says Campbell. "This includes rooftops, distributed power plants and central stations solutions that don't exist yet. We are doing a first installation, and that will be very important as we consider the design across the board from the technology, to the layout and environmental impact."

According to Brian MacCleery, a senior product manager at National Instruments who focuses on green and renewable energy projects, one of the drivers in solar tracking is the emergence of concentrated photovoltaics. Because the optics used in these systems magnify and concentrate the sunlight onto a small solar cell, they require very precise two-axis tracking of the sun to achieve peak output.

He says many solar customers are using physical prototyping and virtual simulation tools to explore new, innovative sun tracking design concepts that can increase the efficiency of their photovoltaic power plants, while withstanding the physical rigors of the outdoor environment.

For prototyping, the trend is toward high-level system design tools and off-the-shelf hardware that combine embedded real-time processors, FPGAs and different types of modular I/O to connect very quickly, plus a high level programming environment. "A small start-up team can very quickly build a functional prototype with the tools, compared to the traditional custom circuit design process which takes a bigger design team and much more time before the prototype is running," MacCleery says.

He says there is a big role for simulation and virtual prototyping, as well. Users can create a CAD model of a solar tracking system and use LabVIEW to test the control system on the theoretical mechanism. Designers can determine the torque required for the motors, analyze the mechanical strength of components, simulate years of tracking operation, and even perform inverse kinematics to determine the ideal movement profile for each axis of motion.
"Tracking companies need to be doing mechatronics design from the beginning to make sure they are analyzing
the strengths and weaknesses of the system, sizing components and motors correctly and looking both at mechanical friction and torques," says MacCleery. "Since solar panels operate over a 20 to 30 year lifetime, they need to be testing every component in the tracker to be sure that the overall system is designed to operate reliably over similar time frames, and to determine the best schedule for maintenance."

At the Applied Research Center for Intelligent Control and Automation in Mexico City, he says a research group is doing a top-to-bottom mechatronics design for a sun tracking system. It is designing all custom mechanical components using SolidWorks and creating virtual prototypes with a LabVIEW/SolidWorks interface that connects the motion control software to the CAD tool and drives it as if it were an actual product.

Within SolidWorks, the research team is doing a design analysis of stresses, forces and torques. With the physical prototype, the group is re-using the control code and deploying it onto the NI CompactRIO controller for their actual tracker. The group is developing novel artificial intelligence-based advanced control algorithms with a goal of tracking the sun as precisely as possible while minimizing energy consumption.