Is There More Plastic Than Fish In The Sea? 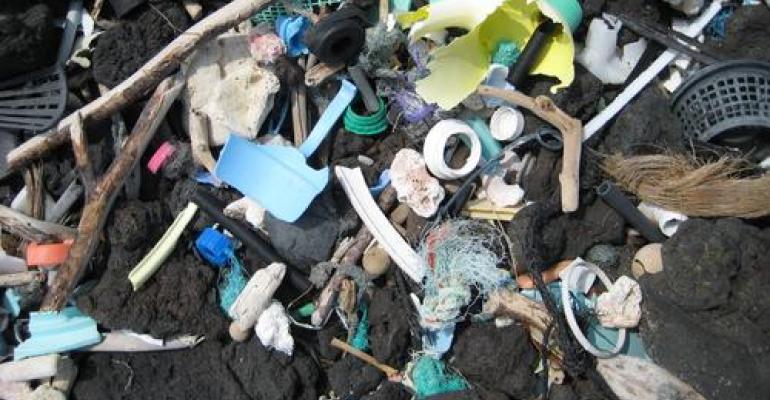 Start Slideshow ›
Virtually indestructible pieces of plastic foul a black rock beach on the island of Hawaii. Smaller pieces of plastic are often mistaken for food and ingested by marine birds, sea turtles, and fish and can kill the unsuspecting animals.
(S

The amount of plastic in the ocean just keeps growing. If things don't change, by 2025 the oceans will contain one metric ton of plastic for every three metric tons of fish. By 2050 plastic will outweigh fish entirely. That's the conclusion of a report by two major foundations and research firm McKinsey & Company. Several proposals have been made for collecting all that plastic and reusing it, as well as for reducing the flow.

As we've told you, the damage caused by these materials to the world's oceans and wildlife continues, despite the fact that plastics manufacturers and processors have worked for several years to prevent or clean up plastic marine litter. In fact, plastic has become so integrated with naturally occurring materials in the oceans that it's formed a new geological substance. Found first on Hawaiian beaches, "plastiglomerate" combines plastic particles with rock fragments and beach sediment.

That's not really surprising, considering that at least 8 million metric tons (8,818,490 US tons) of plastic enter the oceans each year, according to the new study. That rate is expected to double by 2030, and double again by 2050. The New Plastics Economy: Rethinking the future of plastics was produced by the World Economic Forum and the Ellen MacArthur Foundation, with analytical support from McKinsey & Company. According to its executive summary, the study brings a global perspective to the problem of plastic waste, focusing on plastic packaging. It provides "a new way of thinking about plastics as an effective global material flow, aligned with the principles of the circular economy." The study's vision of a global economy sees plastics as never becoming waste but being recaptured via recycling and reuse. It outlines specific, concrete steps that can be taken to achieve the systemic shift that's needed from the more linear material flows of today's plastic packaging economy.

In the current linear flow, which allows so much waste, after a short cycle of first use 95% of plastic packaging material value is lost to the economy: only 14% is recycled and 32% of plastic packaging material completely escapes collection systems. The new approach outlined in the study creates "effective after-use pathways for plastics; drastically reducing leakage of plastics into natural systems, in particular oceans; and decoupling plastics from fossil feedstocks." The shift will require all stakeholders to work together: plastic packaging producers, plastics manufacturers, consumer goods companies, and businesses involved in collecting, sorting, and reprocessing, as well as cities, policymakers, and NGOs (non-government organizations). Strategies include redesigning products for reuse and to make recycling easier; using more plastics that can be composted on an industrial scale; increasing the amount of renewable virgin feedstock; and phasing out plastics that are difficult to recycle, such as PVC and some forms of polystyrene.

Echoing many of these suggestions, a report last fall by the Ocean Conservancy, produced with the McKinsey Center for Business and Environment, contains more localized specific solutions for eliminating plastic waste in the ocean, beginning with five priority countries: China, Indonesia, Philippines, Vietnam, and Thailand. It calls for a coordinated effort on the part of industry, government, and NGOs, stating that, since at least 80% of ocean plastic comes from land-based sources, the solutions must start on land. The report proposes to cut leakage by 45% in the next 10 years, and to eradicate it by 2035. It calls for accelerating waste collection, plugging post-collection leakage, and developing commercially viable treatment options. Longer-term solutions include new recovery and treatment technologies, and new materials and product designs that make reuse or recycling easier to do.

Probably the most ambitious cleanup project so far is proposed by The Ocean Cleanup. The company was founded by Boyan Slat at age 19 when he quit aerospace engineering studies to pursue his idea with a large team of adult specialists and extraordinarily successful crowdfunding. The group proposes a gigantic array to clean up the Great Pacific Garbage Patch. The passive system for collecting ocean plastic is formed of floating barriers fixed to the sea floor by mooring stations to catch passing plastic debris as it moves on ocean currents. The 100 kilometer-long array's vast arms form a V shape that captures and concentrates plastic debris, making it possible to extract it mechanically for recycling or for use as a fuel feedstock. The team has already done a proof-of-concept test, a feasibility study, and the Mega Expedition to determine how much plastic is floating in the Patch. In this year's second quarter, it will deploy a 100 meter-long barrier segment in the North Sea to test the barrier's design in open waters for the first time. Full deployment of the large-scale system in the Great Pacific Garbage Patch is scheduled for 2020.