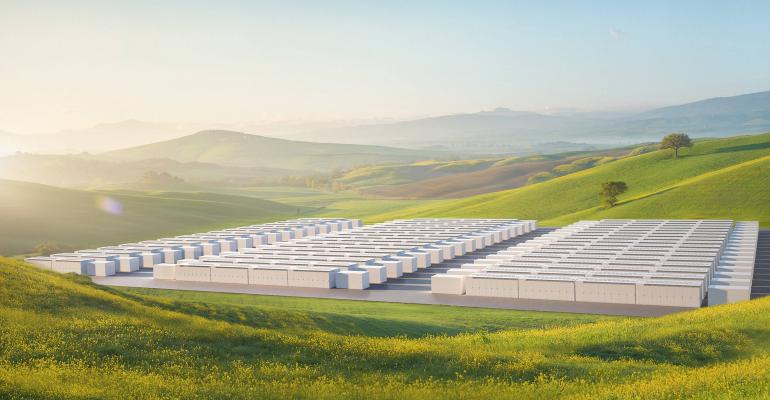 Tesla has introduced a huge new battery system that will allow the integration of wind and solar power sources into large-scale utility grids.

Last year, Design News reported on, what was then, the world’s largest lithium-ion battery in Hornsdale, South Australia, built using Tesla Powerpack batteries. The facility saved nearly $40 million in its first year and has helped to stabilize and balance the region’s previously problematic power grid.

The use of battery storage is transforming the ability of global electricity grids to adapt to the transient nature of renewable energy sources like wind and solar. But for such carbon-free resources to work on a utility scale requires massive battery storage projects, on the scale of Hornsdale. To meet the need, Tesla has designed and engineered a new battery product specifically for utility-scale projects: it is called Megapack.

The goal of Megapack is to significantly reduce the complexity of large-scale battery storage, while providing an easy installation and grid inter-connection process. The Megapack comes from the factory fully-assembled—each with up to 3 megawatt hours (MWhs) of storage and 1.5 MW of inverter capacity. According to a Tesla news release, “Using Megapack, Tesla can deploy an emissions-free 250 MW, 1 Gigawatt hour (GWh) power plant in less than three months on a three-acre footprint—four times faster than a traditional fossil fuel power plant of that size.” The Megapack system can also be DC-connected directly to solar, reducing the losses incurred when converting to AC current.

Tesla developed its own software in-house to control and monitor Megapack systems. Megapacks all connect to Powerhub, a system that Tesla calls, “…an advanced monitoring and control platform for large-scale utility projects and microgrids.” Powerhub can, “…also integrate with Autobidder, Tesla’s machine-learning platform for automated energy trading.” According to the company, Tesla customers have already used Autobidder to dispatch more than 100 GWh of energy in global electricity markets. The company also points out that Megapack will continue to improve through a combination of over-the-air and server-based software updates, much like Tesla pioneered with its electric vehicles.

Tesla will install a Megapack in the upcoming Moss Landing project in California with PG&E. The Megapack will act as an alternative to natural gas “peaker” that fires up when the local utility grid can’t provide enough power to meet peak demand. A Megapack installation can be used to store excess solar or wind energy and to then kick in when a peaker is needed to support the grid’s peak loads.

Tesla describes the Megapack this way: “We took everything we know about battery technology to enable the world's largest energy projects. A 1 Gigawatt hour (GWh) project provides record energy capacity—enough to power every home in San Francisco for 6 hours.”

Critical Power and infrastructure will be among the topics at the The Battery Show and Electric & Hybrid Vehicle Technology Expo 2019 conference that will take place in Novi, Michigan on September 10-12, 2019. Four days, eight tracks, and over 80 sessions, curated by industry experts will bring battery and electric vehicle technologies into clear focus.