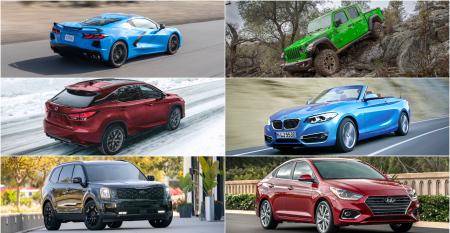 The 10 Most-American Cars Include Some Surprises
Jul 01, 2021
The gearheads at Cars.com have crunched the numbers to produce a list of the top 10 most American cars.

Lexus Kicks Off Electrified Vehicle Product Blitz with Swoopy Concept Car
Mar 31, 2021
The Lexus LF-Z Electrified promises to be just the first of more than 10 electrified products to be introduced in the next five years.

J.D. Power's Most Dependable Cars
Mar 08, 2021
Research firm J.D. Power & Co. surveys owners of three-year-old cars and has named the most dependable 2018 model in each category.

Toyota Driver Monitoring Sensors Could Detect Heart Trouble
Oct 28, 2020
The raft of sensors in new Toyota cars could include some to detect heart anomalies in drivers before they strike.

A Glimpse at Toyota's Robot-Amplified Future
Oct 14, 2020
Toyota is creating robots to amplify rather than replace human beings. The task is a daunting one.

The World's Top Automakers, Ranked by Revenue
Aug 24, 2020
There have been some changes in the rankings of the world's longtime auto leaders and you won't believe the revenue per second.
Load More