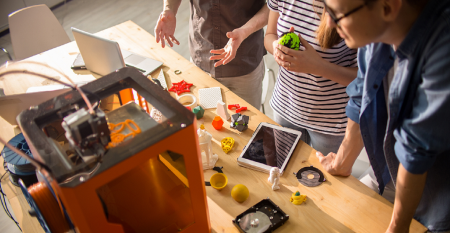 Can High Tech and Construction Reduce Their Energy Footprint?
Feb 02, 2021
5G, data center, semiconductor fab and construction industries must reduce their energy consumption. Can they?

Top 20 Engineering Schools By Salary
Feb 20, 2020
These engineering schools are turning out the highest paid grads, including those with bachelor’s and graduate degrees.

What Ever Happened To “The Visual Microphone?”
Jan 29, 2020
This amazing MIT tech recovered voices from soundless videos. It had applications in medicine, physics and, perhaps, on the infamous Zapruder-Kennedy tapes.

Lamborghini and MIT double the energy density in super capacitors
Dec 13, 2019
Lamborghini's exotic supercars will rely on capacitors for a jolt of electric boost, rather than moving to turbochargers.

Flexible robot grows like a plant to perform in tight spaces
Dec 04, 2019
MIT researchers have designed a robot with an arm that is both flexible and strong. It can adapt to complete tasks in tight...

Nanoemulsion Gels Are a New Way to Deliver Drugs Through the Skin
Aug 29, 2019
Researchers at MIT have developed a novel way to deliver medication through the skin using nanoemulsions, or mixtures of liquids suspended within each other.

Material with Unprecedented Pulling Force Eyed for Artificial Muscles
Aug 26, 2019
Inspired by cucumber plants, researchers designed a fiber that can be programmed to coil and uncoil with varied amounts of pulling force for artificial muscles