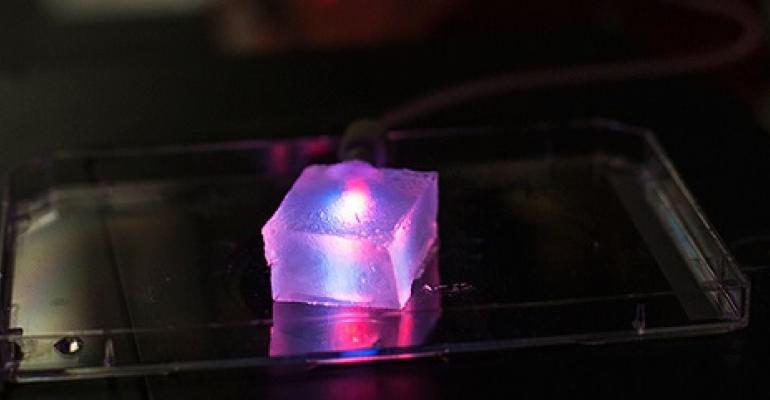 Researchers have found another use for a cotton-candy machine beyond just spinning sweets for kids at carnivals. A team of engineers at Vanderbilt University worked with this type of machine to create networks of threads that work like capillaries and can be used as the basis for artificial organs and bones.

Leon Bellan, assistant professor of mechanical engineering at Vanderbilt University, said he began working with a cotton-candy machine several years ago as a graduate student. He used a process called electrospinning to make nanofibers to form nanochannels, which led him to the idea that it could be used to form artificial capillary system, he told Design News.

During his research Bellan said that by chance he spoke with a reconstructive surgeon, who mentioned that a major hurdle in the field of tissue engineering was the difficulty of building a vascular network.

“I figured that my nanofibers and nanochannels looked like capillaries, but were too small, so I had the idea to try cotton candy instead,” he said in an interview. Bellan paid about $40 for his first machine at a local Target store.

His team eventually built a custom fiber-spinning device to makes fibers from solution for their latest research -- a paper about which has been published in Advanced Healthcare Materials -- but it is still “effectively a cotton candy machine,” Bellan added.

Using this machine, Bellan and his team have successfully produced a three-dimensional artificial capillary system that can keep living cells viable and functional for more than a week, marking a significant improvement over current methods to do similar work, he said.

“Because we can build 3D vascular networks, we can keep cells alive in thick engineered tissue,” Bellan said. “This development enables the production of tissue of arbitrary thickness. Without channels, the tissue thickness is limited to roughly the thickness of a few human hairs.”

The solutions that the custom machine uses to build these networks are water-based gels, or hydrogels. Researchers in the bioengineering field are eyeing as the way forward for tissue engineering, using them as scaffolds to support cells within 3D artificial organs, they said. Hydrogels are an optimal material because scientists can tune their properties to mimic closely those of the natural extracellular matrix that surrounds cells in the body.

The Vanderbilt team did not have an easy time engineering artificial capillaries that function, however, and needed to experiment with materials before finding a viable solution, Bellan said.

The key material in their process is Poly (N-isopropylacrylamide), or PNIPAM, a polymer with the unusual property of being insoluble at temperatures above 32 degrees Celsius and soluble below that temperature. The material also has been used in other medical applications in which it has proven to be friendly to cells, according to researchers.

To develop the artificial capillary network, Bellan and his team first first spun out a network of PNIPAM threads using their machine. Then they mixed up a solution of gelatin in water--a liquid at 37 degrees--and added human cells. Adding an enzyme commonly used in the food industry (transglutaminase, better known as “meat glue”) caused the gelatin to irreversibly gel.

Researchers then poured the warm mixture over the PNIPAM structure and allowed it to gel in an incubator at 37 degrees, after which the gel containing cells and fibers was removed from the incubator and allowed to cool to room temperature. During the cooling process, the embedded fibers dissolved, leaving behind a complex network of microscale channels. The researchers then attached pumps to the network and began infusing them with cell-culture media containing necessary chemicals and oxygen, Bellan said.

“The fibers produced by these spinning devices happen to have roughly the same size and density as the capillaries in the body,” Bellan explained. Thus, the channels that are formed when embedded fibers are dissolved end up looking like a capillary bed.”

Now that Bellan and his team have shown that this technique works, they can fine-tune it to match the characteristics of small vessel networks in different types of tissues, as well as explore a variety of cell types, he said.

“We are working on putting multiple types of cells in the tissue construct, and getting them to behave as if they are in the body and function appropriately,” Bellan said.

The team also is working to optimize the channel formation so that it can be reproduced easily and scale for mass production, he added.

“The production of the fibers is quite quick and easy, but there are some subtleties to the other steps that we are hoping to make as simple as possible,” Bellan said.