HomeStubShould Retired EV Batteries Be Reused or Recycled?
Recent
Will I See You at the Virtual 2022 RT-Thread IoT OS Global Tech Conference?
May 27, 2022
Novel Silk-Protein Eyed for Tendon Repair
May 27, 2022
NTT Data Powers Indy 500 Predictive Analytics
May 27, 2022
At NI Connect: More Companies Discuss Benefits of Test
May 27, 2022
POLL
Supplier News is Checking Out Programmable Automation Controllers
May 27, 2022
What's the Latest in Additive Manufacturing?
May 26, 2022
Top Gun: Maverick Roars into Theaters
May 26, 2022
New 3D Printing Technique Prints Glass for Microstructures
May 26, 2022

Should Retired EV Batteries Be Reused or Recycled? 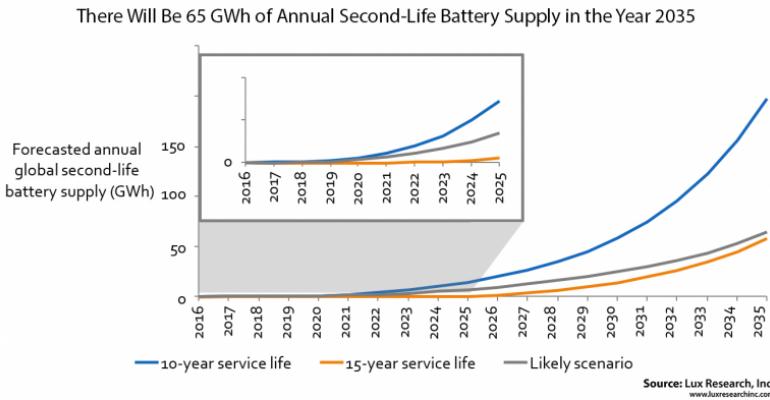 The popular notion that millions of retired electric car batteries will one day be reused to store residential power may not be true, a new study says.

Reuse or Recycle: The Billion-Dollar Battery Question contends that the majority of EV batteries won’t have second lives, largely because re-use will have too great a cost associated with it. “To reuse it, you’ll have to remove the battery from the car, manually disassemble the packs, test the cells to see how much capacity is left, and then sort through the cells to find the ones that are suitable for second-life applications,” noted Christopher Robinson, author of the study for Lux Research, Inc. “All those processes will take time and energy.”

Instead of having second lives, the biggest portion of retired EV batteries will be recycled, the study contends. Most of the components in a lithium-ion battery are recyclable and can be used to make new batteries or other products. Some recyclers, such as Umicore in Belgium, are able to use a smelting process to recover the battery’s base metals, such as cobalt, manganese, nickel, copper, lithium and carbon. Some of those materials can be sold to steelmaking industries, while others can be employed in the creation of cathodes for new batteries.

“Most of the time, it’s going to be a closed recycling process, where the materials will be used to make lithium-ion batteries,” Robinson said. “Companies like Tesla have an on-site recycling facility for an obvious reason – so they can use the materials in their new batteries.”

The question of whether to reuse or recycle EV batteries is going to grow in significance in the coming decades, as millions of retired batteries hit the market. Most of those batteries are expected to be 10-15 years old when they begin their second lives.

The ability for a retired EV battery to be used in a home or in a utility’s battery farm depends largely on how old it is, and how it has been treated by the owner of the car. Some could have second lives of three to five years, depending on how deeply they’ve been discharged. Not all batteries, however, are well-suited for a second life, Robinson said.

“When we talked to people who test these second-life batteries, they told us that some have been mistreated and discharged below their warrantied capacities,” Robinson said.