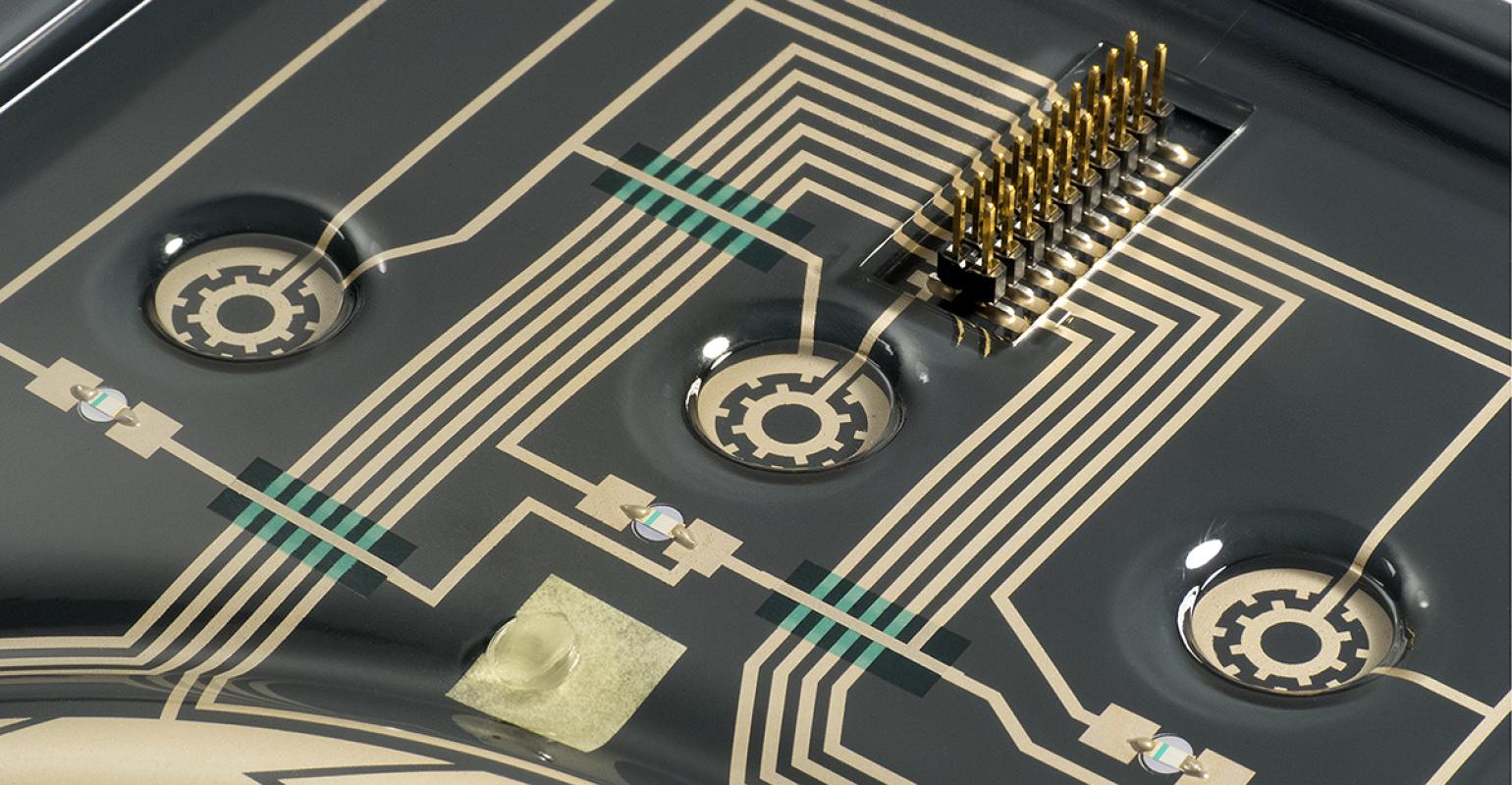 DuPont accelerated its efforts in the nascent field of structural electronics last week, teaming with a supplier that makes molded parts for automobiles and home appliances.

The partnership sets the stage for the growth of so-called “in-mold electronics” technology, in which flexible circuitry is encapsulated in injection-molded plastic parts. The parts could be used for instrument panels in automobiles, as well as window and door controls. They could also serve as touch controls and gesture recognition controls in refrigerators, washing machines, dryers and numerous other appliances.

DuPont engineers foresee the technology as having tremendous growth potential, going from tens of thousands of devices today to millions per year in the near future. “In the next five years, we want one in ten auto interiors and appliance HMI surfaces to be enabled by our in-mold electronics,” Mike Burrows, global venture leader for DuPont Advanced Materials, told Design News. “That’s extremely ambitious, but we would argue it’s doable because of the advantages it offers over what’s in the market today.”

The agreement calls for DuPont to provide the conductive materials for flexible electronic circuits to its partner, TactoTek, which designs prototype injection-molded “structural electronics” for OEM customers in automotive, home appliances, wearables and the IoT.

The technology could be important for designers because it allows them to eliminate the buttons and multiple layers involved in the assembly of conventional electro-mechanical switches and capacitive touch systems, and replace them with pre-integrated plastic parts. “You can mold a thinner, lighter three-dimensional shape for a dashboard or a control surface for a dishwasher, refrigerator, or coffeemaker,” noted Dave Rice, senior vice president of marketing for TactoTek.

Rice said TactoTek recently built a prototype replacement system for an automaker that wanted to eliminate an interior control assembly using 54 parts and two printed circuit boards, and measuring two-and-a-half inches thick. “We created a similar functional element, including map lights and controls, that was just 3-mm thick and conformed to the roof of the vehicle,” he said.

DuPont developed those materials through the addition of polymer resins that enable conductors to stretch. The company’s engineers describe it as a hybrid development effort that involves both mechanical and electrical engineering. “The electronics industry traditionally hasn’t dealt with mechanical properties,” Burrows said. “But if you want a conductor to stretch, it’s a question of mechanical properties – elastic modulus, stress-strain curves, yield strengths, and viscoelasticity. That’s our day-to-day work in the lab.”

Printed circuitry isn’t new per se – it goes at least as far back as Motorola’s ill-fated BiStatix bar code replacement in 2000. But in-mold electronics literally adds an extra dimension to printed electronic technology by enabling designers to create contoured, three-dimensional parts that employ the stretchable electronics. TactoTek engineers say that many designers find the advantages to be, not only functional (such as weight and thickness), but aesthetic, as well.

“It’s fun to meet with design engineers and let them get their hands on the parts and see the light bulbs go on,” Rice said.

To be sure, TactoTek and DuPont aren’t alone in the market. Others, including Sun Chemical, Eastprint, Inc., Duratech Industries, Alsentis, and T+ink, are involved in various aspects of in-mold electronics technology, as well.

Engineers expect the breadth of potential applications to grow in the next few years, but they caution that the technology is best suited for systems involving low electronic density and relatively low power. “If you need to drive a lot of power through your system – like in an automotive headlight – then you should probably be dealing with conventional wiring,” Rice said.

Still, expectations for structural electronics are high. DuPont engineers describe the potential for growth as “gigantic.”

“We are still right at the very beginning of bringing this technology to the market,” Burrows said.

Talent Talk: What Businesses Need to Do Now as Talk Turns to ‘Re-opening the Country’
Apr 13, 2020