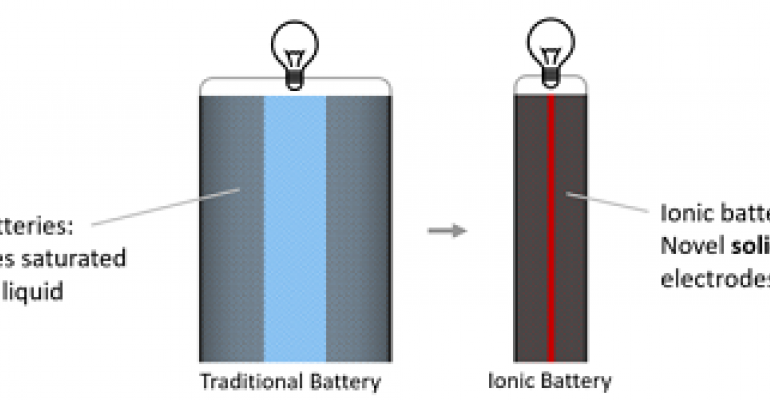 A Tufts University research has developed the first viable solid polymer-based electrolyte for the design of non-flammable lithium-ion batteries.

You’ve probably seen videos or heard or read about lithium-ion batteries that have exploded or caught fire when overheated. Now a researcher from Tufts University has devised what could be a permanent solution to solve this problem with the invention of a new polymer electrolyte that is neither flammable nor explosive, and paves the way for improvements in next-generation battery design.

Michael Zimmerman, professor of mechanical engineering at Tufts University, is behind the new invention, having spun off a company from his research called Ionic Materials to develop the technology--a solid electrolyte that is among the first to be commercially viable.

“Solid electrolytes are very promising for batteries, but have not been practical until now,” Zimmerman explained to Design News.

Michael Faraday discovered the first solid ion-conductors in 1839, Zimmerman said, but barriers to adoption have historically included the need for high temperatures to function, along with several other properties--including the ability to act as an electrolyte in the cathode and to remain stable against lithium metal.

Researchers have been trying for the last several decades—Zimmerman himself working with polymers for 30 years—to perfect the design for a solid battery electrolyte, he said, to little avail. “Each of the two main classes have issues,” Zimmerman said. “Existing polymers suffer from low conductivity at room temperature, while ceramics are brittle and expensive to manufacture.”

That is, until now. Zimmerman thinks he’s solved the historical problem by focusing on a new polymer material with properties that address all the requirements for a solid electrolyte.

The polymer also has the other properties essential to its performance as an electrolyte: High voltage stability, the ability to function as the cathode electrolyte with high active material loadings, and the necessary mechanical properties, Zimmerman added.

Current batteries are low energy, unsafe, and expensive, which is why researchers have been pursuing the development of different chemistries and technologies, he said. Electrolytes are one area in particular researchers think they can improve battery chemistries, particularly because it’s this material that researchers think has been stunting battery evolution, Zimmerman said.

“Liquid electrolytes are holding them back because of their many problems--they are unstable when the temperature rises, are susceptible to shorts caused by dendrites, and can catch fire and explode under certain circumstances,” he said. “Such drawbacks require expensive safety systems to minimize risk, and they prevent higher-energy-density electrodes and lower-cost electrodes from being used due to instability with the liquid electrolyte.”

The polymer developed by Zimmerman and his company eliminates the liquid electrolyte, creating a completely solid battery that still allows lithium ions to pass through it, he said. It also enables a wide range of next-generation battery chemistries for a range of applications, including lithium-metal anodes, high-voltage-intercalation cathodes, and sulfur-conversion cathodes, as well as a  proprietary system Ionic Materials is developing, Zimmerman said.

“All of these chemistries have potential to dramatically improve performance and safety, and reduce costs compared to conventional lithium ion systems,” he said.

Consumer electronics and electronic vehicles are just two of the applications that can benefit from the technology. For the former, the technology can offer “safer and longer-lasting batteries that can be packaged in new and creative ways to drive more satisfying and innovative user experiences,” Zimmerman said.

For electric vehicles, Zimmerman and his team are focused on delivering the enabling technology for batteries that can provide longer range at a lower cost while still being optimized for safety, he said.

Ionic Materials is currently eyeing potential partnerships with global materials companies, battery manufacturers, and device OEMs in both the EV and consumer electronics space, Zimmerman said. He expects the company to put its technology into production in the next two years.