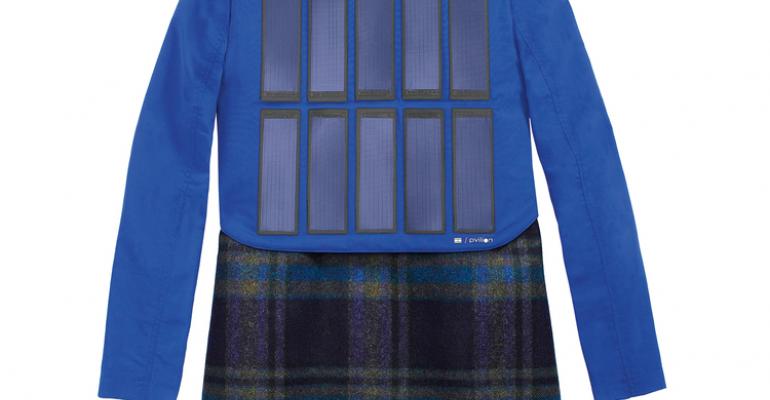 Fashion and solar energy may not typically be spoken of in the same breath, but a Brooklyn-based company called Pvilion is breaking the mold.

is breaking the mold. Two years ago the company, which develops solar panels that integrate with fabric, teamed up with Tommy Hilfiger to integrate solar panels in a jacket, and the companies are now planning to expand the partnership with handbags and other items as part of a new generation of possibilities for solar energy.

Spun off from a larger solar company, Pvilion envisions a future in which solar panels will become a part of numerous consumer products, as well as integrated into urban landscapes to make solar energy ubiquitous in a way that is yet unprecedented, said Colin Touhey, CEO and co-founder of Pvilion.

“Pvilion sees solar as a material that can be applied to almost any surface,” he told Design News. “[We are] integrating solar with fabrics that provides a platform for clothing, bags, tents, awnings … all the way up to stadium roofs.”

Pvilion designs and manufactures flexible PV solar structures and products, and though it’s a fairly new endeavor, the company has 20 years of history behind it. The company is a spinoff from FTL Solar, which in turn spun off from another company, FTL Design Engineering Studio, which launched in 1977. FTL Solar designs solar-powered tents for the military, while the latter was a specialist in designing tent-like structures.

This auspicious history makes solar-powered textiles a natural fit for Pvilion, but that’s not its only forte. The company has a number of solar-based technologies under its belt -- from solar-powered charging stations to curtains to facades -- with a focus on integrating all of the steps in the design process, according to the company.

“The technology ranges in flexibility, power, and cost depending on the application,” Touhey said. “For a consumer product, we would want to go with something much more flexible, rollable, beautiful, and light. For a stadium roof, we aren't as concerned with the flexibility, since the curvature of such systems is far less.”

Touhey said the versatility of Pvilion’s technology is that its design strategy is to consider a solar cell -- which is actually a thin material -- outside of its normal housing in a glass-encased solar panel.

“There are lots and lots of solar companies who develop the cells, so there are tons of great materials out there,” he said. “However, they're almost all thinking, ‘How do we put this inside of two layers of glass and mount it on a rooftop?’ We are thinking something entirely different: How do we take those raw cells and apply them on non-traditional surfaces?”

The partnership with Hilfiger is part of that concept. Pvilion worked closely on the design of the solar-powered jacket with the fashion designer’s team, which developed the aesthetics, while Pvilion contributed the materials, electronics, wiring, batteries, specifications, and production to the project. “It was a great collaboration and we're working on a second generation now,” Touhey said.

Indeed, consumer products are one of two areas of significant potential growth and thus a current focus for the company and its technology, with bags, backpacks, and clothing being eyed as a major source of opportunity, he said. The other area the company plans to focus on in the near term is large-scale architecture, integrating solar technology into buildings, facades, and other structures, Touhey added.