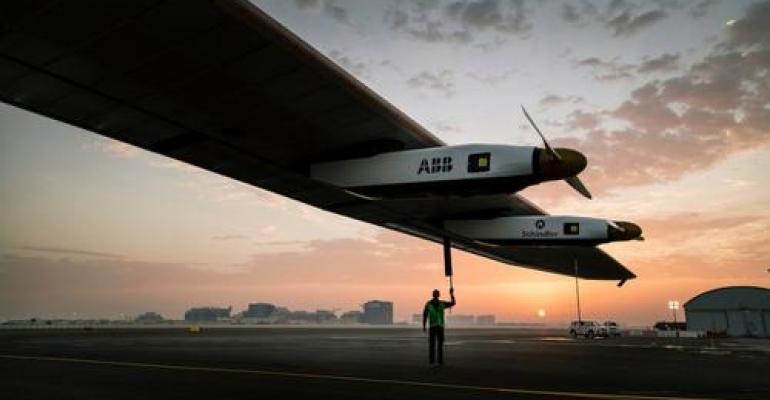 Start Slideshow ›
The 100% solar-powered single-seater airplane Solar Impulse 2 on its first outing in its host city, Abu Dhabi, United Arab Emirates. The ultralight aircraft is prepping for its manned flight, becoming the first plane to fly around the world without using

The 100% solar-powered airplane we told you about last year, Solar Impulse 2, is prepping for its round-the-world flight in March or April of this year. This ultralight aircraft will become the first plane to fly around the world without using fuel. It's able to do so because of above-average performance by all of the technologies that go into it, especially materials.

In 2013, the first prototype model of the Solar Impulse plane completed a piloted, cross-country flight over the US from Mountain View, California's Moffett Field to New York's John F. Kennedy Airport. Last year the second model, Solar Impulse 2, aka HB-SIB, underwent several test flights. You can find out more about the project here.

Solar Impulse project leaders and co-pilots Bertrand Piccard and Andre Borschberg recently announced the plane's itinerary, which will begin at Abu Dhabi, United Arab Emirates in the Persian Gulf and end there five months later after flying 32,000 km (19,883.87 miles). In between the plane will stop for breaks in several cities to relieve the pilots. These cities include Muscat in Oman, Varanasi and Ahmedabad in India, Chongqing and Nanjing in China, and Phoenix, Ariz. The plane will also stop once more in either Europe or North Africa. One of the longest legs will be a non-stop flight from China to Hawaii -- five days and nights.

Watch a video of the press conference (beginning at 10:51):

Weighing 2.3 metric tons (2,300 kg), the plane is powered by 17,248 solar cells on its wings, which have a wingspan of 72m (236 ft), about the same as the largest passenger airliners. Its 633 kg of lithium batteries, recharged during the day by the solar cells, will allow the plane to fly at night. The plane is made of extremely lightweight materials, many of them designed by Bayer MaterialScience and Solvay Specialty Polymers. Also on the Solar Impulse team are three engineers from ABB. The company says it is helping to improve ground operations control systems, enhance the charging electronics for the plane's battery systems, and resolve various obstacles that may occur along the plane's route.

Several of the plane's materials come from Bayer MaterialScience, which has been an official sponsor of the project since 2010, and was responsible for the entire design of the cockpit shell. These materials include highly efficient insulating foams for the cockpit. Baytherm Microcell, which Bayer says has insulating performance 10% better than the current standard, is used for the cockpit door. Other rigid polyurethane foams insulate the batteries. Bayer also supplied thin sheets of transparent, high-performance polycarbonate for the window, a polyurethane/carbon fiber composite material for the door locks, and raw materials for the aircraft's silvery coating and for adhesives holding the textile fabric underneath the wings.

Solvay has also been a major contributor of materials to the Solar Impulse 2, starting in 2004. When I wrote about the US flight last year, they revealed some information about what they're doing, but since then there's a lot more details available. A recent press release gives highlights. Check out the slideshow below (click on the image to begin) for pictures of Solar Impulse, as well as more information on Solvay's extensive contributions in materials for energy capture, energy storage, cockpit and wing structures, and lightweighting metal replacement.