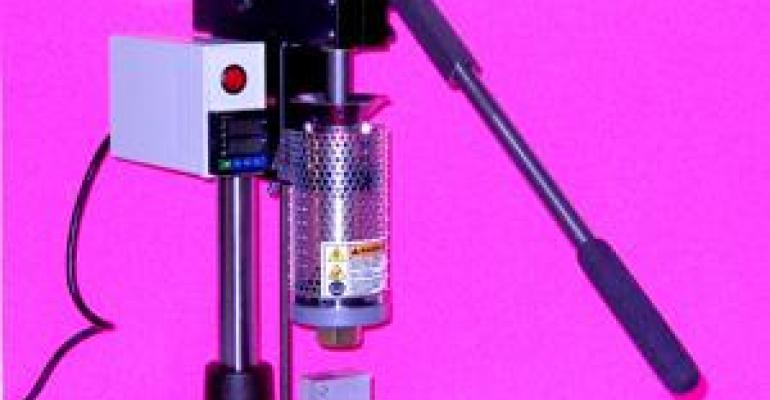 Although many people now think of hobbyist 3D printers when they want to make small quantities of plastic parts at home, 3D printing isn't the only way to go. A $1,500 benchtop injection molding machine has been funded via Kickstarter's crowdsourcing funding process. The hand-operated machine, which reminds me of an innovative, professional-looking Gadget Freak project, can be used to mold small, quality, plastic parts on demand. For materials, users can either purchase plastic pellets or recycle their own plastic milk and water containers, assuming these are made of high-density polyethylene (HDPE).

John Warobiew, president of LNS Technologies and the machine's inventor, told Design News he built the PIM-SHOOTER Model-150A to fill a gap in the market:

If you want to make small, commercial-quality plastic parts or prototypes, it can cost $5,000 to $10,000 or more to make a steel mold. Then you send the mold to China, where a manufacturer will use large hydraulic molders to make 10,000 parts at 1 cent each. But if I only need 10 parts a week and want to make them quickly, on demand, there's no practical way to do that.

The Model-150A makes me think of Design News's Gadget Freak columns, because its inventor built the Model-150A's predecessor -- the smaller hobbyist PIM-SHOOTER Model-20A -- to make small plastic parts in his own home machine shop for his home-based business selling electronic kits. Priced at $595, that smaller product is aimed at schools, hobbyists, or small companies that already have a drill press. When some of those customers said they wanted to make larger parts than the Model-20A's 0.4 cubic inch capacity, Warobiew designed and built a prototype of the larger benchtop model. The Model-150A molds parts of up to 1.25 cubic inches and doesn't require a drill press.

To build production quantities of high-quality molding machines that are also reasonably priced, Warobiew wants to use a local CNC milling shop to make the Model-150A's metal parts in volume quantities, instead of machining each of them himself. That's where Kickstarter came in. Originally, LNS Technologies' goal was $10,000 to get production off the ground. As of June 3, funding had already reached just under $20,000 with 37 backers. The project will be funded on June 16, and machines will be available to the public beginning in late July through LNS Technologies' website.

Since hobbyists and students were the main buyers of his electronic kits, Warobiew said he expected similar customers for his injection molding machines. But more than 90 percent of sales of the Model-20A have been to companies or universities, either for parts used in products they sell, or for making prototypes or parts used in research.

Although low-end 3D printing has been receiving a lot of press recently for producing finished objects, not just prototypes, high-quality parts are still reserved for the high end of the spectrum, such as those used in automotive and aerospace applications. Warobiew said that before deciding to build his own injection molding machine, he looked at several hobbyist 3D printers in the $1,000 range. But, as many readers have commented on Design News's 3D printing blogs, the quality of finished parts these low-end machines can achieve isn't good enough to be sold commercially. Printing time is also slow, and materials are limited to ABS or PLA.

I envision a desktop 3D printer and a desktop injection machine sitting side-by-side as part of the natural design and engineering flow of design to prototyping to manufacturing. A plastic part can be created in CAD, then 3D-printed to verify the design or to produce marketing samples. Then, the CAD file can be translated to CNC for producing an injection mold, and production can be moved to the benchtop injection molding process. Eventually, if there is sufficient demand, production can move to full-size injection molding equipment.

Low-cost aluminum molds can be used with the Model-150A, or users can get molds made at local machine shops, or mill their own if they have CNC machines. LNS Technologies' website also offers molds, as well as plastic pellets. Plastics that can be used with the injection molder are Acetal (Delrin), ABS, PLA, HDPE, polystyrene, polypropylene, polyethylene, LDPE, TPE, and EVA. Although nylon and polycarbonate are not approved for use with the Model-150A, Warobiew said he expects to announce a higher temperature limit in the near future that would make this possible.