Soft Robot Can Detect Damage and Self-Heal Its Own Skin 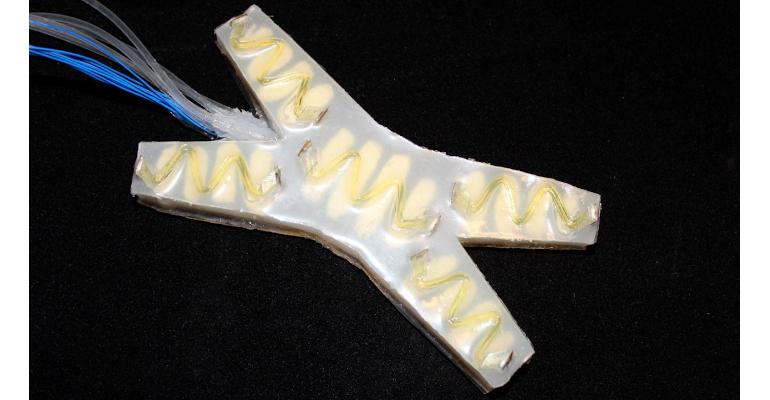 Researchers installed SHeaLDS—self-healing light guides for dynamic sensing—in a soft robot resembling a four-legged starfish and equipped with feedback control. After the researchers punctured one of its legs, the robot was able to detect the damage and self-heal the cuts.
A combination of optical sensors and a composite material called SHeaLDS creates more agile, self-sufficient machines.

For soft robots to achieve their promise to perform tasks in places too small or dangerous for humans to reach, they have to be pretty durable and able to withstand some wear and tear. To help reach this design goal, researchers at Cornell University developed a soft robot that not only can detect when it's been damaged, but also locate on its body where the damage is and heal it, researchers said.

The team—led by Rob Shepherd, associate professor of mechanical and aerospace engineering in Cornell Engineering—developed a combination of optical sensors and a composite material to create the robot as part of ongoing research to create dynamic and agile soft machines for future applications, he said.

“Our lab is always trying to make robots more enduring and agile, so they operate longer with more capabilities,” Shepherd said in a press statement. “The thing is, if you make robots operate for a long time, they’re going to accumulate damage. And so how can we allow them to repair or deal with that damage?”

His team answered that question with their invention, which combines flexible fiber-optic sensors that researchers previously developed to make both soft robots and related components including a robotic skin and wearable technology. The solution—called SHeaLDS, or self-healing light guides for dynamic sensing—forms a framework for soft robots that can self-heal from cuts at room temperature without any external intervention, researchers said.

The sensors use light from an LED, which is sent through an optical waveguide. A photodiode detects changes in the intensity of the beam to determine when the material is being deformed. This latter feature is possible because the waveguides can still propagate light even if they are punctured or cut, researchers said.

Shepherd's team combined the sensors with a polyurethane urea elastomer that uses two chemical elements to facilitate the core features of the soft robot. It uses hydrogen bonds, which allow for rapid healing, and disulfide exchanges, to give the robot its strength.

To prove that SHeaLDs can perform as designed, researchers installed it in a soft robot resembling a four-legged starfish, using feedback control to track performance. Researchers punctured one of the starfish's legs six times and, after about a minute, the robot detected the damaged and healed each cut. The robot also autonomously changed its gait once it sense the damage, researchers said.

However, the robot's material is similar to skin in that while it can heal itself, it is not completely impervious to serious injury or destruction if exposed to certain external factors, Shepherd noted.

“They have similar properties to human flesh,” he said of the robots. “You don’t heal well from burning, or from things with acid or heat, because that will change the chemical properties. But we can do a good job of healing from cuts.”

The next step for the research is to integrate machine-learning algorithms into SHeaLDS that can recognize tactile events, Shepherd said. The ultimate goal of the project is to create “a very enduring robot that has a self-healing skin, but uses the same skin to feel its environment to be able to do more tasks," he said.