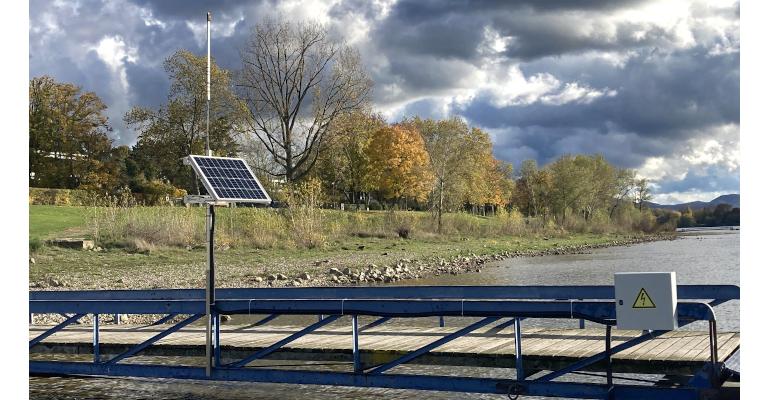 A water-level sensor developed using open-source technologies can be operated with solar cells and then work completely standalone with no maintenance to use GPS signals to measure water levels of rivers.
Researchers in Germany, which suffered devastating flooding last year, have found a new solution to continuously monitor water tables.

With several regions in the world experiencing devastating floods in the past several years, climate scientists need more than ever ways to predict when rivers or other bodies of water that threaten communities might overspill their banks.

Researchers in Germany—where there were dozens killed in flooding of the Ayer river last year—have developed a device that they hope can help solve this problem. A team at the University of Bonn have created a low-cost sensor that can measure water levels in rivers and continuously transmit this data to an evaluation center via mobile communication.

Though scientists have had a range of ways to determine the level of a watercourse—from simple ones such as a yardstick to advanced radar solutions—most of those have the drawback of suffering damage due to direct exposure to high water levels.

Moreover, they often can't monitor levels constantly and consistently, they suffer challenges for remote reading, and they also can just be too expensive to implement in places that need this type of monitoring.

The sensor developed by the Bonn team—which already has been in use for two years—is a cost-effective, durable, and reliable way to transmit water levels to those who need to know, so both flood- and drought-warning systems can be activated appropriately, researchers said.

Harnessing Satellites for the Sensor

At the core of the device is a low-cost Global Navigation Satellite System (GNSS) receiver and antenna that uses U.S. GPS satellites and their Russian counterparts, GLONASS, to determine the position of its location with several meter accuracy, explained Makan Karegar of the Institute of Geodesy and Geoinformation at the University of Bonn.

"However, satellite signals can also be used to measure the height of the GNSS antenna above the river surface," he added. This occurs because the waves transmitted by the satellites are partially picked up directly by the antenna, Karegar said.

The rest is reflected from the nearby environment—in this case, the surface of the water—and reaches the receiver via a detour, he said. This reflected part of the signal can travel longer and, when superimposed on the directly received signal, forms certain patterns called interference, researchers said. It's this interference that can be used to calculate the distance between the antenna and the water level.

By measuring the water level in this way, the GNSS antenna can be attached to any structure—such as a bridge, building, tree, or fence—near a river to measure the water levels without danger of water exposure and thus device failure, Karegar explained.

"From there, it can measure the river level around the clock without contact—to within around 1.5 centimeters on average," he said. "And yet it is less likely to be damaged during extreme flooding events."

While the accuracy of the sensor's method for measuring the water level is not on par with a radar-based sensor, it works sufficiently for its intended use, Karegar said. It's also less expensive than radar technology, at less than 150 euros for the device, he said.

One aspect of the sensor that researchers hope to improve upon in future versions is that the current device can only measure levels for rivers with a width of at least 40 meters, they said.

"This is the smallest radius from which the antenna can receive the reflected satellite signal," Karegar acknowledged. "If the watercourse is too narrow, most of the reflected signals come from the land."

One of the other benefits of the technology that researchers hope will allow other scientists to use it is that they used primarily open-source technology to develop it, and the code for their software is available for free use by anyone online, they said.

The project page is on the GitHub website, a popular developer forum for sharing code and development projects. Using the files found there, others interested in the device can easily reproduce it, researchers said.

The sensor's GNSS antenna is connected to a low-power microcomputer called a Raspberry Pi, a platform also popular with open-source and hobbyist developers that's about the size of a small smartphone but is powerful enough to calculate water levels from raw data, researchers said. This allows the device to be powered by solar cells and then function completely standalone as well as transmit data via a mobile network.