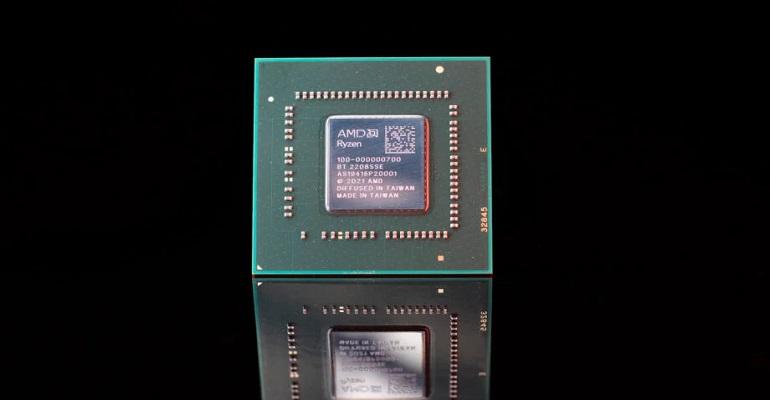 AMD continues to unveil new processors such as the Ryzen 7020 for mobile products, but has seen some processor sales decline due to weakness in the PC market.
AMD says its third-quarter sales will be affected by lower processor shipments and margins.

The second quarter of 2022 was not good for some key semiconductor companies, with Intel reporting weak earnings and AMD projecting middling second-half sales. While most third-quarter 2022 earnings have not been announced, preliminary results from semiconductor supplier AMD don’t look too promising.

AMD is projecting third -quarter revenue of approximately $5.6 billion, which is 29% higher than a year ago, but lower than the projected outlook of $6.7 billion. The company attributes the lower revenue to reduced processor shipments from a weaker than expected PC market and significant inventory correction actions across the PC supply chain.

AMD’S forecasted third-quarter gross margin is projected to be 42%, with and non-GAAP gross margin pegged at 50%. Previously, AMD previously expected non-GAAP gross margin to be 54%. The company attributes the shortfall to lower revenue driven by lower client processor unit shipments and average selling prices (ASP). Third quarter results also include $160 million of charges primarily for inventory, pricing, and related reserves in the graphics and client businesses.

AMD’s projected results reflect a continued weakening of the PC market, which grew by leaps and bounds during the COVID-19 pandemic two years ago when remote working prompted many consumers to upgrade their PCs. Now, return-to-office mandates have weakened PC demand, and inflationary cost pressures are further putting a cap on consumer spending.

“The PC market weakened significantly in the quarter,” said AMD chairperson and CEO Dr. Lisa Su, in a released statement. “While our product portfolio remains very strong, macroeconomic conditions drove lower than expected PC demand and a significant inventory correction across the PC supply chain. As we navigate the current market conditions, we are pleased with the performance of our Data Center, Embedded, and Gaming segments and the strength of our diversified business model and balance sheet. We remain focused on delivering our leadership product roadmap and look forward to launching our next-generation 5-nm data center and graphics products later this quarter.”

AMD continues to unleash a steady stream of new products. Last month, AMD introduced its Ryzen 7020 processors for mobile products, which can provide up to 12 hours of battery life, and its Ryzen Embedded V3000 Series processors for enterprise and cloud storage applications.

The weak PC demand is not likely going away anytime soon. International Data Corporation (IDC) said in its  Worldwide Quarterly Personal Computing Device Tracker that global PC shipments are forecast to decline 12.8% in 2022 to 305.3 million units, while tablet shipments will fall 6.8% to 156.8 million.

IDC expects the PC market to see further contraction in 2023 as consumer demand has slowed, the education demand has been largely fulfilled, and enterprise demand gets pushed out due to worsening macroeconomic conditions. The combined market for PCs and tablets is forecast to decline 2.6% in 2023 before returning to growth in 2024.

AMD will announce its third-quarter results on November 1.