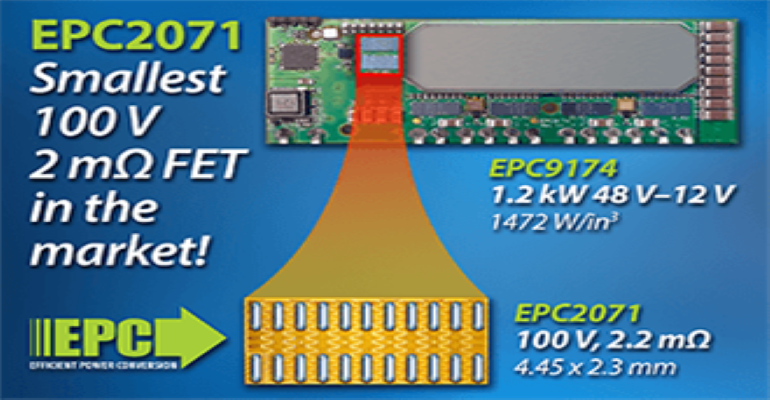 Efficient Power Conversion's EPC2071 GaN FET is rated 100 V with an on-resistance of 1.7 milliohms typical. The part is said to be one-third the size of a silicon MOSFET with similar on-resistance.
Higher efficiency, faster speeds play into needs of emerging markets such as 5G, wireless, automotive.

A perfect storm is forming for the rapid growth of the GaN (gallium nitride) semiconductor devices market, according to a new study by Prescient Strategic Intelligence. According to the firm, sales of GaN semiconductors reached $12.1 billion in 2021, and are projected to grow at CAGR of 22.1% through 2030, reaching $72.8 billion.

Prescient said the advantages of GaN over siliconꟷincluding higher energy efficiency, faster device speed, and lower costꟷ will lend themselves to the performance requirements of computers, smartphones, televisions, cameras, and robotics. The firm also noted that the growing 5G market, which requires greater wireless data, will necessitate the need for semiconductors able to handle high frequencies to meet the wireless spectrum needs.

Related: Not All Critical Chips Suffering From Shortages

Smartphone chargers are benefitting from GaN transistors. GaN semiconductor IP company announced in March that their GaN transistor technology has been designed into a 45-W charger for Samsung’s S22+ and Ultra smartphones. According to the company, the GaN switching transistors enables fast charging while doubling the power of the previous-generation charger.

Consumer electronics is another key area for GaN transistors. Efficient Power Conversion (EPC) has expanded its selection of low-voltage, off-the-shelf GaN transistors with its EPC2071, a 100 V FET with an on-resistance of 1.7 milliohms typical. According to the company, the part is one-third the size of a silicon MOSFET with similar on-resistance. The part is suited for BLDC motor drives, including e-bikes, e-scooters, robots, drones, and power tools.

According to Prescient, opto GaN semiconductors generated the largest revenue, of around $5.0 billion, in 2021. These semiconductors have several applications, largely in aerospace & defense and consumer electronics, for devices such as photodiodes, LEDs, lasers, optoelectronics, and solar cells. Opto semiconductors are also used in the automotive sector for indoor and outdoor lights, automotive lights, and pulse-powered laser systems.

According to the study, power ICs account for the majority of the GaN semiconductor devices market share, and it is expected to maintain its dominance in the foreseeable future as well. The need for GaN-based power ICs is increasing, due to their features, in applications such as collision avoidance, efficient navigation, and real-time air traffic control. Manufacturers are also focusing on developing GaN power ICs for automotive and telecom.

Recently, Efficient Power Conversion expanded its line of radiation-hardened GaN FETs for power conversion in critical spaceborne and other high-reliability applications with a 200-V device. Designated the EPC7007, the GaN FET exhibits an on-resistance of 25 milliohms and comes in a 5.76 mm2 footprint. The company claims the device is 40 times smaller than a silicon FET with similar on-resistance.