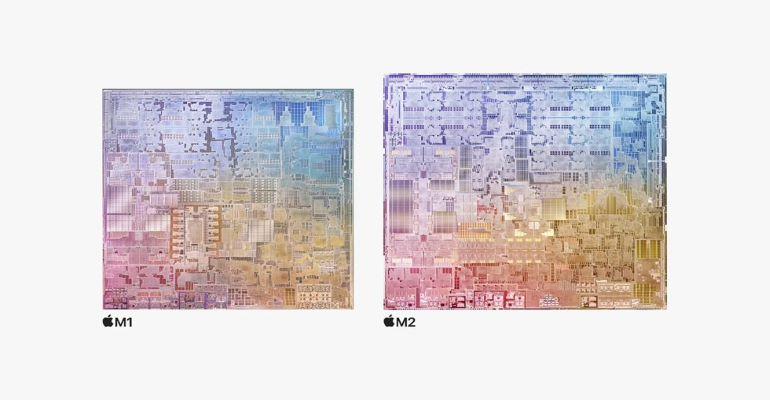 Apple has introduced its M2 chip (right), which promises higher performance than its existing M2 chip (left). The chip will power the company's MacBook Air and 13-in. MacBook Pro laptop computers.
Successor to M1 chip, the M2, promises higher throughput while saving power.

Like Intel and AMD, Apple continues to push the performance envelope on its processor chips to keep up with future computing needs. One of the company’s announcements at this week’s Apple Developers Conference was the introduction of the M2 chip, which will replace the M1 chip in several of its laptop computers.

The M2 is built using second-generation 5-nm technology. The chip packs in 20 billion transistors, which is 25% more than the M1 chip. According to Apple, the additional transistors improve features across the entire chip, including the memory controller that delivers 100 GB/s of unified memory bandwidth—50% more than the M1.

Apple is claiming that the M2 delivers 18% greater multithreaded performance than the M1, which would enable its laptops to more readily handle computing-intensive tasks while remaining energy efficient.

The M2 features Apple’s next-generation GPU with up to 10 cores—two more than M1. Combined with a larger cache and higher memory bandwidth, the 10-core GPU delivers 25% higher graphics performance than the M1 at the same power level, and up to 35% better performance at its max power. Compared with the integrated graphics of the latest PC laptop chip, the GPU in M2 delivers 2.3x faster performance at the same power level. It matches its peak performance using a fifth of the power. The higher performance makes for long battery life, even when playing graphics-intensive games or editing massive RAW images.

The M2 chip’s Neural Engine can process up to 15.8 trillion operations per second—over 40% more than the M1. The media engine includes a higher-bandwidth video decoder, supporting 8K H.264 and HEVC video. Apple’s ProRes video engine enables playback of multiple streams of both 4K and 8K video.

Apple will incorporate the M2 chip its redesigned MacBook Air and updated 13-inch MacBook Pro. For now, the M1 chip remains in Apple’s other laptop computers.

In conjunction with the M2 Chip and updated laptops, Apple has redesigned its macOS to be compatible with its new chips. macOS Ventura, coming this fall, will also take full advantage of M2, bringing new features including Stage Manager, and new capabilities with Continuity Camera and Handoff in FaceTime. macOS Ventura also includes big updates to Safari, Mail, Messages, Spotlight, and more.