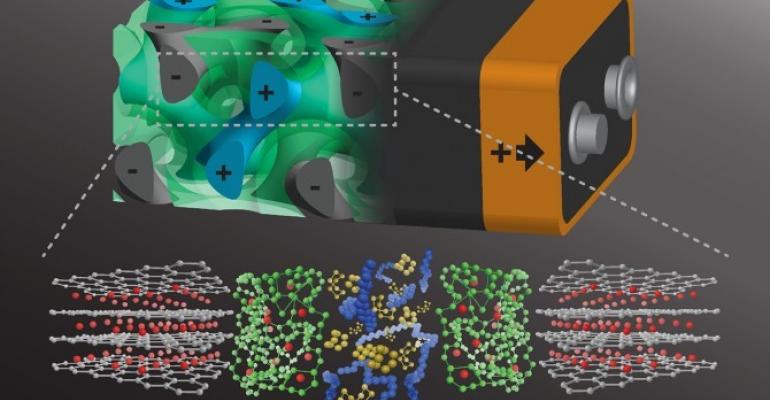 A team at Cornell University has developed an innovative way to make batteries with three-dimensionality on a nanoscale.

Battery research into new materials for anodes, cathodes, and electrolytes brings news of breakthroughs almost daily. But there are few reports of research into the basic architecture of the battery. Perhaps that’s why a recent press release and scientific paper by a team at Cornell University is so interesting: It details a concept for a 3D, self-assembling battery with a gyroidal structure.

It’s not the first time that the Cornell University research group, led by Dr. Ulrich Wiesner, has published about the practical use of gyroidal structures. According to a 2016 Cornell press release, “The gyroid is a complex cubic structure based on a surface that divides space into two separate volumes that are interpenetrating and contain various spirals.”

3D on a Nanoscale

In an ordinary battery, the anode and cathode are more or less parallel to each other on either side of a non-conducting separator that also contains the electrolyte. If the components could be integrated into 3D architectures on the nanoscale, it has been suggested that batteries could be built with improved power capability. But traditional fabrication techniques haven’t allowed such architectures to be explored.

Previous work from the same laboratory included a gyroidal solar cell and a gyroidal superconductor. Joerg Werner, lead author on the current work, was developing a self-assembling filtration membrane when he began to wonder if the same concept could be applied to a battery design.

According to the latest Cornell press release, “The gyroidal thin films of carbon—the battery anode, generated by block co-polymer self-assembly—featured thousands of periodic pores on the order of 40 nanometers wide. These pores were then coated with a 10 nanometer thick, electronically insulating but ion-conducting separator through electropolymerization, which by the very nature of the process produced a pinhole-free separation layer.”

The freedom of holes and porosity in the separator was considered crucial. Piercing of the separator can cause short circuits and fires in traditional battery designs. After adding the separator, the cathode material—made from sulfur—was added in an amount that didn’t quite fill the remaining pores. Sulfur doesn’t conduct electricity, so a layer of electronically conducting polymer was then deposited over the sulfur.

“This three-dimensional architecture basically eliminates all losses from dead volume in your device,” said Wiesner in the Cornell press release. “More importantly, shrinking the dimensions of these interpenetrated domains down to the nanoscale, as we did, gives you orders of magnitude higher power density. In other words, you can access the energy in much shorter times than what’s usually done with conventional battery architectures."

A proof-of-concept lithium ion sulfur battery was constructed, with a functional carbon anode intercalated with lithium ions and a sulfur cathode. They were separated by an ultrathin electrolyte phase. Each layer was less than 20 nanometers thick and extended throughout a macroscopic demonstration battery.

The good news is that the initial test battery did function. However, charging and discharging the battery resulted in volume changes in the sulfur that could not be accommodated by the electronically conducting polymer. The polymer eventually ripped apart and the battery no longer worked. It did, however, indicate a new and very different possible direction in battery architecture—one that deserves significantly more study.

A wide range of battery topics will be discussed at The Battery Show on September 11-13 in Novi, Michigan. Here is a program listing indicating when each presentation will take place.