When Your Starbucks Is A Robot 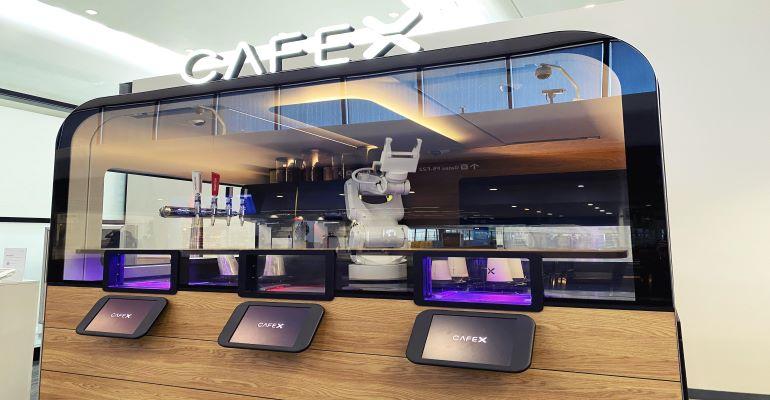 The CafeX robotic coffee kiosk, in several locations including San Francisco International Airport, offers the convenience of selling caffeinated drinks with a potentially faster turnaround time than a conventional coffee shop.
A frustrating return plane flight takes an interesting turn with the discovery of a robotic coffee shop in an airport concourse.

I recently attended the DesignCon conference in Santa Clara. The live-again event was informative, well-organized, and above all well-attendedꟷkudos to the events staff at Informa Markets for pulling it off. But getting to and from the show from my New York City home was, in short, a nightmare.

Let me vent for a few minutes. My outgoing flight to San Jose on a Monday evening was delayed by over three hours. Well, at least I made it to my hotel at 1 am. Now for the return flight. First, I received an e-mail stating the flight, scheduled to leave at 10:30 pm, was delayed until 1:45 am. Okay, I’ll wait in the lobby of the hotel where I checked out earlier in the day and work for a bit. At around 7:45 pm, Google Alerts sends a text stating the flight was scheduled to leave on time at 10:30 pm, so I’d figure I’d head to the airport.

When I arrived at the airport, the screen says the flight was delayed until 1:45 am, the same time as the original e-mail. So much for Google’s AI algorithms. Two subsequent e-mails then pushed back the scheduled departure times to 2:12 am and 2:57 am, respectively. Finally, someone came around to say the flight was canceled altogether.

As you might expect, the next battle was trying to get on another flight. Jet Blue booked me the same doomed flight the next evening, which I wasn’t going to wait around for. Luckily, I was able to book an American Airlines flight leaving 6 am the next morning to New York City. The catch was that the flight was leaving from San Francisco International Airport, 30 miles away.

Related: When Your Running Companion is a Robot

I normally don’t comment on rideshare trips, but the $50+ trip from San Jose Airport to San Francisco International Airport included at least a 20-minute side trip off Highway 101 for the driver to buy gas, followed by 20 or so minutes stuck in traffic for night-time highway construction. When I finally arrived at the airport at close to midnight, I had to stay in the downstairs lobby and could not go through dreaded security, as the ticketing agents had already left for the night and the automated ticketing machines could not issue me a boarding pass. This meant waiting around several hours trying to “sleep” in an available chair near a rumbling escalator, luggage in tow, interrupted by periodic airport safety announcements. Somewhat surprisingly, there were others trying to catch some sleep in the lobby as well.

If you somehow are still reading this, at roughly 4:00 am this bleary-eyed traveler finally obtained a boarding pass and made it through security without incident. As I was walking through the course of San Francisco Terminal 1 toward Gate B20. I saw a kiosk marked “CafeX” with a short line in front. I decided to take a look.

What I saw for the first time was a robotic coffee shop programmed to make various caffeinated drinks depending on what is input. After you scan your QR code, a menu showing various drinks and their prices pops up on your smartphone screen. After you make your selections and pay via credit card, the robot goes through its paces, picking and placing combinations of drink selections, milk, and sugar. Once ready, your name flashes on one of several screens and you can pick up your drink.

You can see the CaféX coffee machine run through its paces here as well is in the video following the story.

The CaféX menu includes selections such as Caffee Mocha, Cappuccino, Lattes, Espressos, Hot Chocolate, and Drip Coffee, which I selected. The prices, while not cheap, are comparable to what you might pay at a Starbucks in an airport. The taste? Not bad, even considering I was in desperate need of a caffeine fix at the time.

CafeX is the brainchild of Henry Hu, co-founder and CEO, who launched the business over five years ago as a reaction to the long lines customers often encounter at peak times in Starbucks and other coffee shops. While the company has seen some locations come and go due to the COVID-19 pandemic, the idea of minimizing the wait time for caffeine is a relief for many time-starved commuters and travelers.

A check of the CafeX site shows there are currently three of these robotic coffeemaking kiosks in operation—the one I used in San Francisco Airport Terminal 1, another in Terminal 3 near Gate F4. and for those that happen to travel to Dubaiꟷone at the Museum of the Future that is available during museum hours. The airport sites are open 24/7.

While the CafeX kiosk does require someone to restock supplies and do minor upkeep and maintenance, it can operate most of the time unattended and occupies just a fraction of the space that a Starbucks would require. Given the staffing issues now facing food establishments, using robots to sell coffee and other items, particularly during non-peak times or where vendor space is costly or not available, is a sound idea.

For this traveler, CafeX was a nice revelation during a bungled trip.