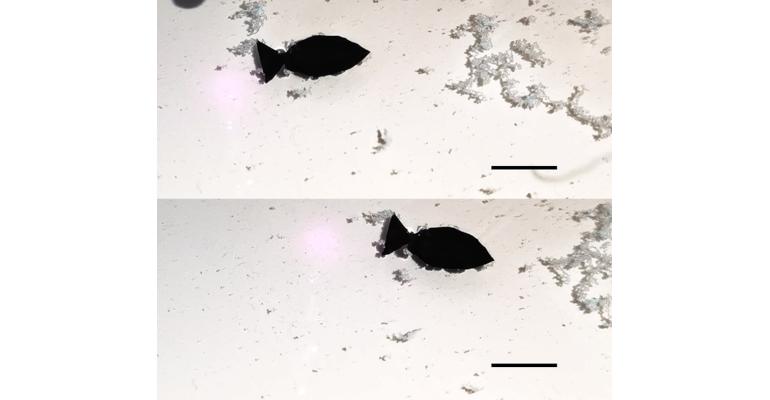 A light-activated fish-shaped robot developed by researchers in China collects microplastics as it swims (scale bar is 10 millimeters).
A tiny, light-powered machine can swim as fast as phytoplankton and self-heal any cuts to the composite material from which they’re made.

Microplastics are a huge pollution problem for the world’s oceans, spurring scientists to try to find ways to remove them from the environment. This is no small feat due to their tiny size, which means they spread easily and fall into cracks, crevices, and other hard-to-reach places that make retrieval difficult.

Researchers from several Chinese universities may have a solution, however, with the invention of a light-activated, self-healing robotic fish that can move through the water and pick up microplastics, they said.

A team of scientists from Sichuan University, Sichuan Agricultural University, and Northwestern Polytechnical University developed the robot, which uses a novel material that is durable enough to sustain the conditions found in aquatic environments to perform its task, researchers said. It also can heal itself after it’s been cut and still continue to function normally, they said.

Typically scientists build soft robots using hydrogels and elastomers, which easily can be damaged when navigating the ocean or other harsh environments. To solve this problem, researchers took inspiration from nacre, or mother-of-pearl, which is found on the inside surface of clam shells. This material has a microscopic gradient, which goes from one side with calcium carbonate mineral-polymer composites to the other side with mostly a silk protein filler.

Researchers aimed to mimic this gradient structure to find a flexible material for the fish robots that could withstand the oceanic environment.

To create the material, the team linked β-cyclodextrin molecules to sulfonated graphene, creating composite nanosheets. They then incorporated different concentrations of polyurethane latex mixtures into the nanosheets, and then layered them to create an ordered concentration gradient of the nanocomposites through the material.

Using this material, researchers fabricated a tiny fish robot about half an inch long with a near-infrared light laser at its tail, which would cause it to flap when quickly turned on and off, creating forward propulsion. As mentioned before, the material also is self-healing, which means that any cuts to the robot’s skin would fix themselves while retaining its microplastic-absorbing capability, researchers said.

“The robot can stably absorb pollutants and recover its robustness and functionality even when damaged,” they wrote in an abstract for a paper describing their work in the journal Nano Letters.

Top speed for the robot was 2.67 body lengths per second, which researchers said is faster than speeds previously reported for other soft swimming robots. It’s also about the same speed as active phytoplankton moving in water, they said.

A demonstration of the robot showed that it could repeatedly adsorb nearby polystyrene microplastics and transport them elsewhere while swimming through water. Researchers envision, then, that the robot could be used to help monitor and remove microplastics and other pollutants in aquatic environments.

The work also can be used to provide an example of nanostructural design to offer “an effective extended path to other integrated robots that required multifunction integration,” researchers wrote in their abstract.