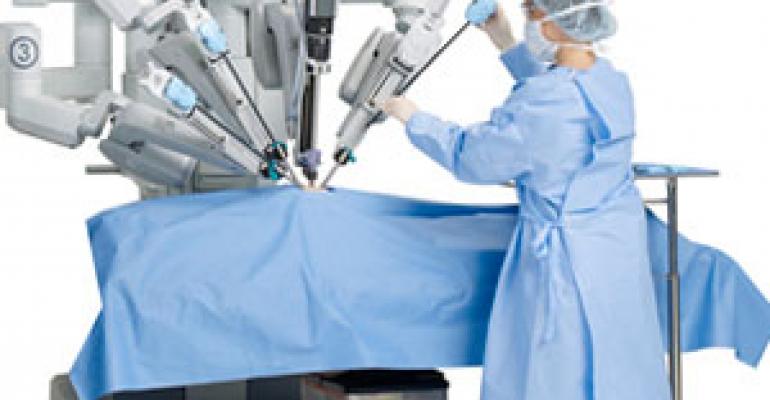 Laparoscopy is a surgical approach in which long-shafted instruments are inserted through small incisions to access targeted anatomy. Compared with traditional open procedures, laparoscopy has revolutionized surgical treatment by shortening recovery time with less pain and fewer adhesions, resulting in better post-operative quality of life. However, manual laparoscopy has several limitations, including lack of depth perception, poor camera control, limited degrees of freedom for the instrument tips, and inverted hand-instrument movements. These limitations lead to unnatural and painful surgical postures that result in surgeon fatigue.

Robotic-assisted laparoscopy, such as the da Vinci system, allows the surgeon to sit at a stereo console and remotely control endoscopic instruments via a patient-side robot. The da Vinci system consists of three components: the surgeon console, a patient-side cart that holds the instruments, and the image processing equipment. The system's 3-D visualization provides depth perception, and the wrist-like articulations of the miniaturized instruments improve surgeons' dexterity and range-of-motion. The system also improves control by reducing hand tremor and providing motion scaling. The ergonomic instrument-hand-eye alignment and intuitive instrument movement can also reduce surgeon training time in comparison to using manual laparoscopy.

The da Vinci system is based on foundational robotic surgery technology developed at SRI (formerly known as Stanford Research Institute). Intuitive Surgical later formed relationships with IBM, Massachusetts Institute of Technology, and Heartport Inc. to further develop the system. The FDA has cleared the da Vinci for a range of general, thoracic, urological, gynecological, head and neck, and cardiac procedures in both adults and children.

The da Vinci system requires up to five small (<1 cm) incisions for insertion of the two surgical manipulators and a camera. The da Vinci patient-side cart holds the instruments docked to the patient as surgical assistants stand over the patient. Meanwhile, the surgeon can operate the system while seated across the room at the console, where the look and feel of the open surgery is replicated. The surgeon performs movements using masters (which help translate surgery motions). The surgeon's fingers grasp the master controls below the display with wrists naturally positioned relative to his or her eyes. The surgeon's movements are then translated into precise, real-time robotic movements inside the patient.

The robotic masters are controlled by the surgeon through wrist, hand and finger movements, just as with a typical open surgery. A full range of optional EndoWrist Instruments are also provided for the system. These instruments are designed with seven degrees of motion that exceed the dexterity of the human wrist. Each instrument has a specific surgical mission such as clamping, suturing and tissue manipulation.

The patient-side cart houses the two robotic arms and one endoscope arm, which duplicate the surgeon's movements. The laparoscopic arms pivot at the operating port, eliminating the use of the patient's body wall for leverage, thus minimizing tissue and nerve damage. Supporting surgical team members install the correct instruments, prepare the port in the patient, and supervise the laparoscopic arms and tools being used.

The da Vinci surgical system incorporates high-end motion control technologies so that every motion provides the smooth, accurate movements reminiscent of a skilled surgeon - even at slow, calculated speeds. Each da Vinci S HD System contains more than 30 motors manufactured by Maxon Precision Motors. These motors are located at the heart of each manipulator.

The Maxon motors provide the inputs and outputs to the da Vinci System. Through a series of feedback controls, the motors and encoders receive inputs from the surgeon, are translated in real-time through the console electronics, and provide output signals to the motors in the manipulators. In turn, the manipulators exert forces back through the console electronics to the surgeon's hands.

Maxon motors are designed with rare earth magnets in their stators and incorporate an ironless rotor design that eliminates magnetic cogging, even at slow operating speeds.

The surgeon's side cart employs motors referred to as masters to distinguish their dual role. The slave side, or manipulator motors, require the same precision, but also need to be able to be backdriven while an assistant surgeon moves the end effectors into position. The motors exhibit low hysteresis at the instrument tips.

Among the more than 30 motors used by Intuitive's engineers in the da Vinci system, are the RE 25 motor, some with and some without encoder feedback; RE 13 mm motors equipped with GP 13 series gearheads and 13 mm magnetic encoders; and RE 35 series motors with third-party encoders.

Although the prevalence of robotic-assisted, minimally invasive surgery has increased tremendously, training opportunities remain relatively limited. Because comprehensive practice and experience is necessary in order to develop proficiency with a sophisticated tool such as the da Vinci system, the development of training aids for robotic surgery is critical in helping meet the demand for this technique.

At the Nebraska Biomechanics Core Facility in the HPER Biomechanics Lab. at the University of Nebraska at Omaha, a group of Ph.D. students work with the Robotic Surgical Lab. at the university's medical center to develop a computer training program for robotic surgery where new surgeons can learn how to use this advanced technology.

Two training platforms have been developed with National Instruments' LabVIEW graphical programming software. The first is designed for monitoring and recording a surgeon's performance during a training program and ensuring that the surgery is performed using the correct movements. This training platform also incorporates visual real-time feedback to show trainees how much force they apply on the training task or animate tissue. This visual feedback helps trainees reduce tissue damage inflicted during the procedure.

All of the data communications on the da Vinci robotic surgical system is acquired via TCP/IP using NI's USB-6009 data acquisition board to connect to the electromyography system and electrogoniometers. These connections acquire physiological measurements, such as muscle activations and joint angles, from the surgeons. Using this data, researchers and medical personnel can objectively evaluate surgical proficiency before and after the robotic surgical training protocol.
0 comments
Hide comments
Related
You Might Like