A Return to Sodium Sulfur 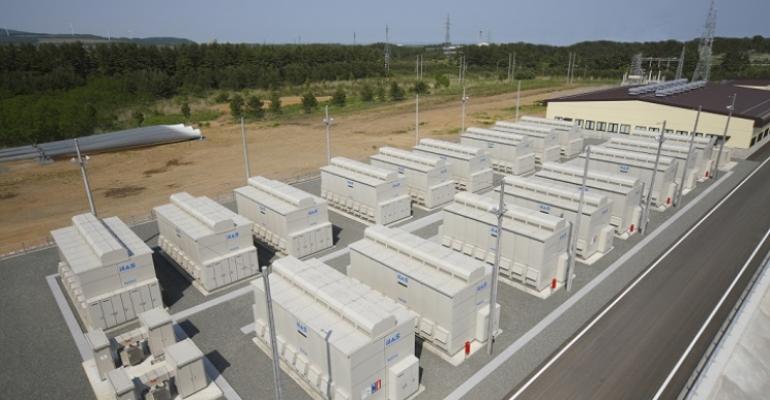 Global energy companies like Tesla and Sonnen grab headlines for installing huge, power-grid-scale lithium ion batteries in places like Australia, Puerto Rico, and the US. It would thus be easy to assume that lithium ion is the only choice for battery support of power utilities. While lithium ion batteries do account for 59% of electrochemical grid storage, other battery technologies do exist. One of these is sodium sulfur (NaS).

NaS batteries fall into a category called high-temperature batteries. They are called this because elevated temperatures are required to keep the anode and cathode materials in a molten state for the battery to work. In operation, the chemical reaction that takes place creates enough heat to maintain the molten state. It is only during startup or when the battery is idle that external heating needs to occur.

The use of molten sodium as an anode (negative electrode) and molten sulfur as a cathode (positive electrode) were first developed by Ford Motor Company in the 1960s. The operating temperature of 300-350°C—needed to keep the sodium and sulfur in a molten state—along with the dangers of highly reactive sodium metal, posed dangers for the use of the NaS battery in electric vehicles (EVs) on roadways. Eventually, Ford abandoned the idea for EVs.

Ceramics specialist NGK Insulators, in Japan, started working with the NaS concept in 1989. NGK added a thin Beta Alumina ceramic electrolyte membrane between the molten materials. During discharge, the ceramic membrane only allows positively charged sodium ions to pass through, from the negative molten sodium to the positive molten sulfur. During charging, the process is reversed. Working jointly with the Tokyo Electric Power Company (TEPCO), NGK went into production with its commercial NaS stationary battery for renewable energy grid support in 2002.

NGK found additional applications in Japan for its NaS battery, including load leveling at wind farms and other grid services. The technology spread to other parts of the world. To date, more than 300 MW of NaS storage in 170 countries is in place. This represents about 3% of the total electrochemical grid storage.

According to The International Renewable Energy Agency (IRENA) in its October 2017 Electricity Storage and Renewables report, the energy density of a NaS battery is between 140 and 300 watt-hours/liter (Wh/L). This is somewhat less than the 500 Wh/L of a current generation lithium ion battery. What NaS does offer is a much longer service life—more than 5,000 charge and discharge cycles. This is almost double what’s possible with a lithium ion battery. NaS also offers slightly lower costs (largely due to being made from cheap and abundant materials) when compared to lithium ion batteries.

One of the limiting factors to the acceptance of high temperature batteries has been the fragile nature of the ceramic membrane between the molten anode and cathode components. The paper-thin membrane is easily damaged when the battery is in operation. Now, a research group at MIT has published a paper in Nature detailing the use of a metal mesh to replace the ceramic membrane in high temperature batteries.

The approach taken by the MIT team was to replace the function of the brittle ceramic membrane with a more robust and flexible, specially coated metal mesh. After experimenting with a variety of materials, the best results were obtained using a steel mesh coated with a solution of titanium nitride. It resulted in a workable, lower-cost battery.

The team also found something unexpected. Quoting from an MIT Press Release, “The membrane had performed its role—selectively allowing certain molecules to pass through while blocking others—in an entirely different way, using its electrical properties rather than the typical mechanical sorting based on the sizes of the pores in the (ceramic) material.”

“I consider this a breakthrough,” said MIT Professor Donald Sadoway, in the MIT Press Release. “The fact that you can build a sodium-sulfur type of battery, or a sodium/nickel-chloride type of battery, without resorting to the use of fragile, brittle ceramic—that changes everything,” he said.

Lithium ion batteries will remain the top choice for personal electronics and to power electric vehicles into the foreseeable future. However, the potential for high temperature batteries—especially those using molten sodium and sulfur—could help reduce the cost and improve the reliability of energy grids that rely on renewable energy sources.

A wide range of battery topics will be discussed at The Battery Show on September 11-13 in Novi, Michigan. Here is a program listing indicating when each presentation will take place.