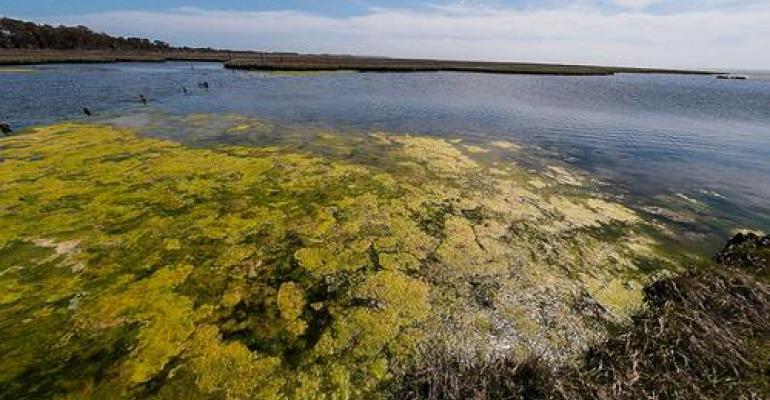 There've been many efforts to develop biofuel from algae in the last few years. The technology has suffered from high capital costs and high water usage, making it difficult to compete on price with other fuels.

But those costs are usually associated with highly centralized operations that actively grow algae for fuel. What if the excess algae borne of fertilizer runoff that pollutes rivers and lakes could be harvested and used as feedstock? What if the leftovers from that operation could be recycled into farm soil nutrients, eliminating at least some of the need for artificial fertilizers in the first place? A team of scientists at Western Michigan University are developing a scheme for doing just that. The team, headed by John B. Miller, presented its research at the recent meeting of the American Chemical Society in Denver. 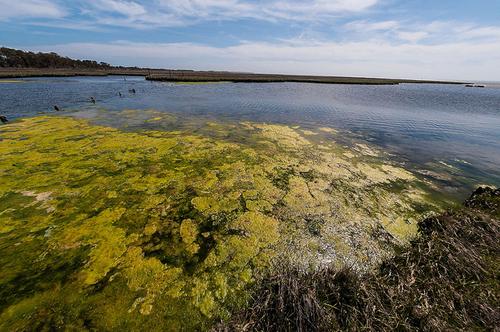 Although the algal blooms fed by nitrogen and phosphorus in farm fertilizer runoff are toxic to aquatic life and cause dead zones by sucking up oxygen, they are also a potential source of nutrients and energy. Algae are also easy to grow, needing only sunlight, water, and nutrients, and their growth rate is two to eight times as fast as land-based plant sources of ethanol feedstocks, such as cellulosic biomass, corn, or soybeans.

Miller's team believes its scheme can benefit small farmers by downsizing existing algae-growing systems for biofuel so they're easier to operate, almost completely automated, and can work remotely in locations without access to a power grid. Today, most of these systems are large-scale, centralized "algal turf scrubber" operations, such as ones in Florida that grow natural communities of periphytic or attached algae. These require a large infrastructure, such as the electric grid and large pumping installations.

Instead, Miller wants to build smaller, distributed systems that operate on water bodies near small farms throughout the US. The algae harvested can be used not only for a profit-making biofuel feedstock, but the nutrient-rich waste leftover after fermentation and distillation can also be used as a cost-saving organic fertilizer.

The team is looking at different substrates for optimizing the growth of algae in water bodies. Researchers expect to use 3D printing for engineering substrates that provide different geometric features to foster the growth of algal blooms. They are also investigating various collection techniques that will be more useful in small, remote locations.