Recycling Gold from SIM Cards for Pharmaceutical Use 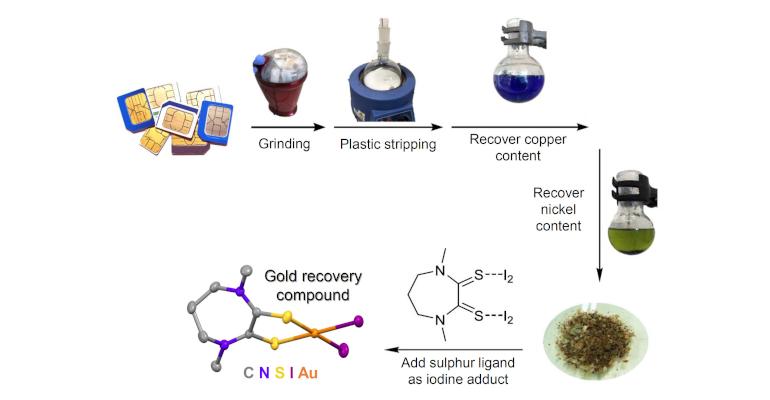 Researchers at Imperial College London used a method for extracting gold from electronic waste developed by researchers at the University of Cagliari in Italy and created their own process to reuse the precious metal to create medications.
Researchers in Italy and the United Kingdom have teamed up to create a more sustainable product lifecycle for electronic devices.

It's no secret that the ubiquity of mobile and other electronics devices are creating a huge environmental issue when it comes to disposing of them as waste once they become obsolete. Scientists are aiming to solve this problem in different ways by trying to recycle materials from devices for reuse in various applications. As part of this endeavor, researchers at Imperial College London used a method for extracting gold from electronic waste developed by researchers at the University of Cagliari in Italy and created their own process to reuse the precious metal in medical applications.

Through the research, scientists hope to reduce the amount of waste electrical and electronic equipment (WEEE) that's sent to a landfill—which is currently most of it—and extract the wealth of metals found in the devices to create a more circular economy for electronic devices, they said.

Indeed, it's currently time- and energy-consuming as well as unpleasant in terms of the use of harsh chemicals to extract metal from used electronic devices, which is the primary reason it's not done more. But by finding new ways to recover and use these metals in a more sustainable way, scientists can change this scenario dramatically, noted Professor James Wilton-Ely, lead researcher on the project from the Department of Chemistry at Imperial College.

"We are currently paying to get rid of electronic waste, but processes like ours can help reframe this ‘waste’ as a resource," he said. “It is shocking that most of our electronic waste goes to landfill and this is the opposite of what we should be doing to curate our precious elemental resources."

Before the Imperial College team—which also includes Wilton-Ely's colleague, Professor Chris Braddock—could put their plan for reusing gold from electronic products into action, they had to extract it in a sustainable way.

To do this, they tapped a low-cost and mildly impactful way to extract gold and other valued metals from electronic waste—including printed circuit boards (PCBs), SIM cards, and printer cartridges—developed by Professors Angela Serpe and Paola Deplano from the University of Cagliari.

The process, which the researchers patented, entails using green and safe reagents in a step-by-step process to selectively remove metals like nickel, then copper, silver and finally gold, from various devices. The Italian researchers published a paper on this work in the journal ACS Sustainable Chemistry & Engineering.

One issue with the method, however, is that the gold produced from the process is part of a molecular compound and so cannot be re-used again in electronics development without investing a lot more energy to obtain the gold metal.

Fortunately, the plan the Imperial College team explored was to re-use the gold not for electronic devices but as catalysts—which are used to increase the rate of a chemical reaction while remaining unchanged in most processes that produce materials.

Researchers tested the gold compound they extracted from used SIM cards in a number of reactions commonly used in pharmaceutical manufacture; specifically, to create anti-inflammatory and pain-relief drugs.

What they discovered is that the compound performed as well as or better than the catalysts that scientists currently use. Moreover, it can be re-used more than once in this process, they said.

If researchers can prove that it's economically viable to recover gold from electronic waste, then they also can create uses for the other metals—such as copper and nickel—in the process, they said. Even the plastic of the devices might find its way into a reuse system, creating an overall more sustainable lifecycle for the devices, Wilton-Ely noted.

"Even SIM cards, which we routinely discard, have a value and can be used to reduce reliance on mining, and this approach has the potential to improve the sustainability of processes such as drug manufacture," he said.

The Imperial College researchers published a paper on their work in the journal ACS Sustainable Chemistry.

Both the U.K.-based researchers and their fellow scientists in Italy are currently working to extend their recovery and re-use approach to the palladium found in end-of-life automotive catalytic converters. This may serve to be even more valuable to the product lifecycle, as palladium is widely used in catalysis and is even more expensive than gold, researchers observed.