Recent
Q&A With IndyCar Gearbox Expert Anna Chatten
May 13, 2022
Intel Unveils Trust Authority to Boost Security
May 13, 2022
Supplier News Looks at Highly Customizable Industrial Monitors
May 12, 2022
Here Technologies Maps are Key to Mercedes Level 3 Automation
May 12, 2022
POLL
'We Built the Domino's Pizza Tracker for Manufacturing'
May 12, 2022
Break Your Bubble Gum Habit by Watching Its Production
May 12, 2022
This Patch Monitors All Your Vitals, Including Blood Pressure
May 12, 2022
First E-Skin to Anticipate, Perceive Touch from All Directions
May 12, 2022

Prius Plugs Into a New Era

Small battery, fast recharging, and low costs are the keys to Toyota's "less is more" strategy of electrification.

If Guardino's opinion is any indication of broader public perception, then Toyota's new plug-in vehicle may be about to hit its target in the consumer space. The forthcoming Prius isn't an electric car, but it could give consumers the feeling of owning one, since it calls for them to plug it into an electrical outlet.

For Toyota, engineering a car that plugs into a wall socket could be a big step forward. On one hand, the giant automaker is dipping a toe into the electric car world. On the other, it's maintaining its bent for economic practicality. 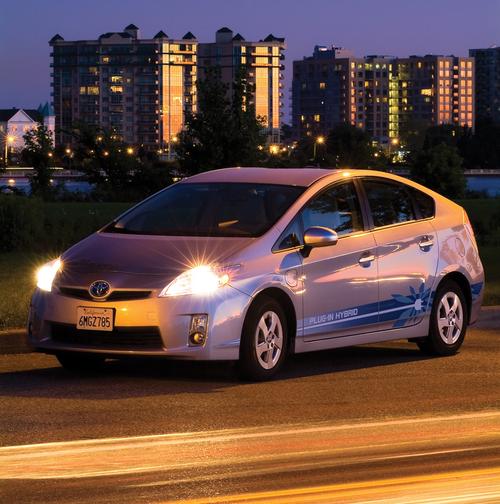 The Prius PHV looks like a conventional Prius, except for the charge port near the left front wheel.

"There's a price point that our customers are comfortable at, and that's at about $26,000," says Bill Reinert, national manager of advanced technology vehicles for Toyota Motor Sales USA. "Beyond that, it's a very steep curve. The number of consumers who want to buy something past that price point diminishes pretty rapidly."

For Toyota engineers, that observation has become the key to the design of the new Prius PHV. Using economic practicality as a baseline, the engineers designed a "partially electric" car with a relatively small battery and less all-electric range than competitors offer. As a result, the new vehicle goes only 13 miles on a charge, but it offers dramatically lower costs and recharging time than competing electric vehicles and plug-ins. Rated at 5.2kWh, the battery offers about a third the capacity of the Chevy Volt 16kWh battery and less than a fourth the capacity of the Nissan Leaf's 24kWh battery. But it can be charged on a 110V outlet in a scant three hours.

Toyota engineers are hoping those figures will add up for consumers. They say the smaller battery means not only faster recharging, but also lower costs.

"The plug-in Prius is going to shake up the market quite a bit," says Dave Hurst, a senior analyst for Pike Research. "If they can bring this car in at the $28,000 to $30,000 range, they'll get a lot more people who can actually afford it."