Image courtesy of The University of Texas at Austin 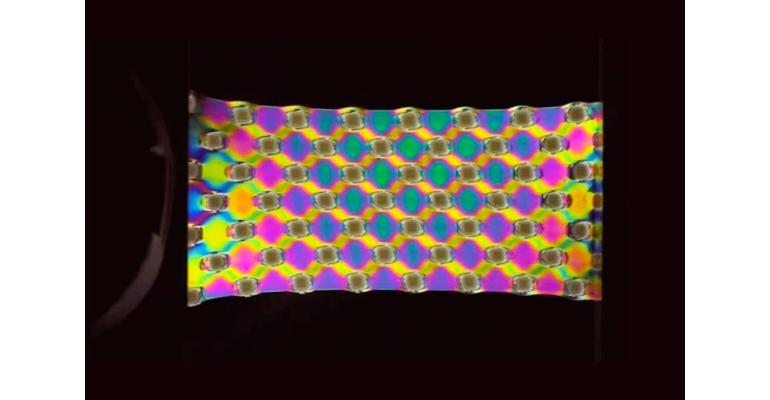 Researchers at The University of Texas at Austin created a new plastic-like material developed that can be manipulated to change its properties. It can be soft and stretchy or hard and rigid with only the application of a catalyst and visible light.
Researchers used light to create a polymer that is 10 times more durable than natural rubber.

Researchers have taken inspiration from living things such as trees and shellfish to create a new plastic material that is both flexible and strong, showing a toughness that's 10 times more than that of natural rubber, they said.

A team at The University of Texas at Austin (UT Austin) used a unique process that involved applying light and a catalyst to change the properties of a material. Their aim was to mimic natural materials that can be hard and rigid in some places and soft and flexible in others­, they said. Indeed, while naturally occurring materials such as skin and muscle easily combine properties such as strength and flexibility, it's been historically difficult for scientists to recreate this in synthetic materials, said Zachariah Page, a UT Austin assistant professor of chemistry, who led the research.

In the past, when using a mix of different synthetic materials to mimic these attributes, materials would come apart or rip at the places where the different materials met, he said. In this case, Page and his team could control and change the structure of a plastic-like material, using light to alter how firm or stretchy the material would be. “This is the first material of its type," he said in a post on UT News.

Where these researchers had success while others failed is in their ability to control crystallization, and therefore the physical properties of the material, particularly using the application of light, which "is potentially transformative for wearable electronics or actuators in soft robotics," he said.

Striking the Right Balance for the Polymer

To find the right formula to create the unique material, the researchers started with a monomer, a building block of the polymer—or strings of monomers-similar to the one found in the plastic with which most people are familiar. They then tested a dozen catalysts that, when added to their monomer and shown visible light, resulted in a semicrystalline polymer similar to what's found in existing synthetic rubber, researchers said. Where the light touched the material, it became harder and more rigid, while the areas that were not lit remained soft and stretchy.

The reaction of the material takes place at room temperature, and the monomer and catalyst that the researchers used are commercially available, they said. They also used inexpensive blue LEDs as the light source in their process, which took less than an hour and minimized the use of hazardous waste. All of these aspects mean that the fabrication process for the smart material is rapid, inexpensive, energy efficient, and environmentally benign, researchers said. Moreover, the resulting material, because of its different properties, was stronger and could be stretched further than most mixed materials created previously, they said.

Researchers published a paper on their work in the journal Science. The team plans to continue its work to develop more objects with the material to continue to test its properties and to find out what types of applications for which it is well-suited.

Among these could be the development of 3D objects that include both hard and soft components, said Adrian Rylski, a doctoral student at UT Austin who participated in the research..

The team also envisions the material used as a flexible foundation on which to anchor electronic components in medical devices or wearable technology, or to improve movement or durability in robotics, researchers said.