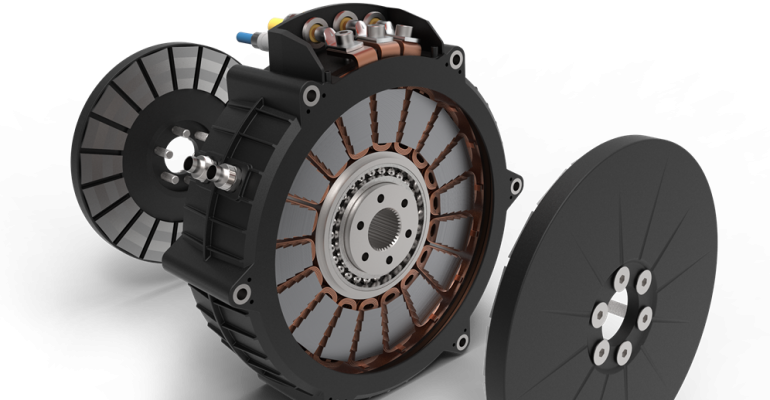 With all of the emphasis on lithium ion battery technology for electric vehicles (EVs), it is sometimes easy to forget that the electric motor is the device that actually propels the vehicle. Perhaps that’s because most EVs use motors of similar basic configuration. Now, a company in Belgium has a design that it hopes will change that.

To produce rotation in a synchronous BLDC motor, windings of copper wire—called the stator—surround the rotor and interact with the magnetic fields of the permanent magnets. By carefully energizing different regions of the stator at exactly the right time, a rotational force can be imparted to the rotor and the motor spins. Doing so requires some sophisticated power electronics—the cost of which has dropped significantly in recent years. The downside to a radial flux BLDC motor is its size and weight. For an EV with even modest performance, such a motor can weigh well over 100 pounds.

On a radial flux BLDC motor, the magnets are positioned such that their poles lie radially at the outer edge of the rotor. The magnetic flux from the magnets interacts with the windings of the stator. The flux loop starts at the first permanent magnet on the rotor, crossing the air gap between the rotor and stator. It then passes through the first metal tooth on the stator. The flux flows along the steel core of the stator until it passes through a second tooth on the stator, then flowing back to the second magnet on the rotor.

There is another way, which is loosely based on a design that Nicola Tesla researched and patented in 1889. An axial flux motor places the permanent magnets on the face of the rotor, and puts the stator in front of the rotor. To balance the magnetic forces, two rotors are often used—one on either side of the stator. The flux loop starts at a magnet on the rotor and passes through the air gap between rotor and stator. The flux passes axially through the first stator tooth and immediately arrives at a second magnet (when dual rotors are used). Unlike the radial flux motor, the flux path is one-dimensional, allowing the use of grain-oriented magnetic steels for greater efficiency.

Axial flux motors were studied by British inventor and EV enthusiast Cedric Lynch as early as 1979. His brushed DC motor design held the magnets stationary with a spinning armature activated by sliding brushes as the rotor. Lightweight, compact, and relatively powerful, the motor was ideal for electric motorcycles. In 2009, the inaugural race for electric motorcycles at the Isle of Man was won using an Agni motor based on Lynch’s designs.

A Stack of Pancakes

Because the rotor and stator windings face each other, the axial flux motor can be short. The larger the diameter of the rotor, the greater the torque produced. Axial flux motors are sometimes called “pancake” motors because of their large diameter and short length. They can be stacked together on a common shaft to produce greater power outputs.

Lightweight, compact and powerful motors are also an advantage in aviation. In 2005, Roman Sušnik from Slovenia tested an electric propulsion system for a glider aircraft. The axial flux motor from his tests later went into production in the EMRAX motor line with four different size motors available. Since then, a British company, Yasa, has begun production of axial flux motors aimed at the EV market.

Belgium startup Magnax is considering three main markets for its newly-designed axial flux BLDC motors. The company is looking carefully at the transportation sector, particularly mainstream electric vehicles, motorcycles, and aviation. Because the axial flux motors are short in length, they could be used on a chassis or inside of a wheel as a hub motor. Wind turbines also could benefit from an axial flux generator design by removing the expensive and complicated gearbox that most radial flux generators require. Lastly, general industrial applications could benefit from the greater efficiency (up to 10% better) that axial flux designs deliver.

Magnax has spent six years developing its axial flux motors. The design’s dual rotors allow the use of grain-oriented magnetic steel that Magnax claims can lower core losses by as much as 85% for improved efficiency. The company uses a rectangular section copper to wind its stator. This results in a fill factor as high as 90%, again improving efficiency. The stator windings are also in close proximity to the aluminum housing of the motor to enhance cooling. Magnax expects to deliver its first prototypes of its motor at the end of 2018. The company claims the initial motor will have a remarkable power to weight ratio, producing 400 horsepower (300 kilowatts) while only weighing around 50 pounds (22.5 kilograms).