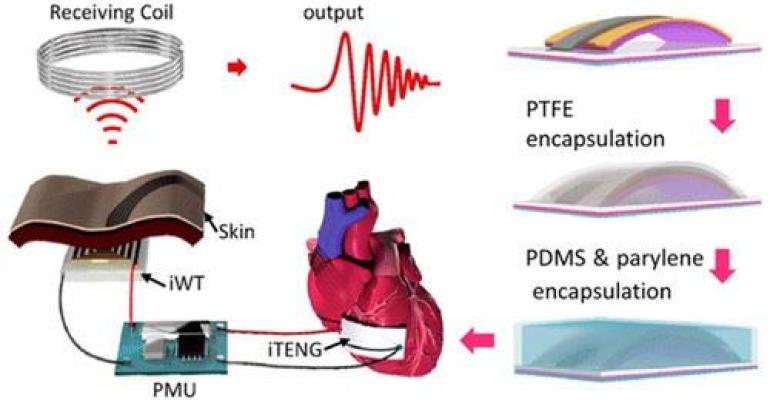 The US-Chinese team that's been working on a hybrid harvester based on triboelectrics has reached a new milestone in their work, successfully demonstrating an implantable triboelectric nanogenerator (iTENG) for biomechanical energy harvesting in a living adult animal -- in this case, a swine. The achievement shows progress toward using biomechanical energy as sustainable power inside the body for implantable medical devices, researchers said.

The triboelectric effect happens between two materials that repeatedly touch each other and then separate, exchanging electrons and building up a charge. Zhong Lin Wang, a professor specializing in nanotechnology at the Georgia Institute of Technology, and his group have been working on various TENGs in conjunction with researchers from the Beijing Institute of Nanoenergy and Nanosystems.

Wang's team has already shown in ongoing research how triboelectrics can create a harvester that generates energy using both wind and rain, and another aimed at powering smart cities that uses both wind and solar energy. The latest work shows TENG advancements for medical devices, which could in the future preclude the need for a battery in implantable devices. 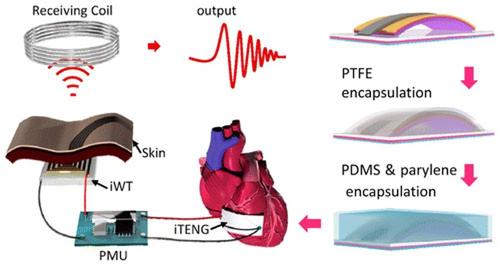 The latest achievement shows several notable enhancements over previous work to develop an iTENG, Wang told Design News. One aspect is in performance, with the in vivo output voltage enhanced by a factor of 3.5, and the corresponding output current increased by a factor of 25, he said.

The new research also showed the evaluation of iTENG in operation over a longer period of time. "For more than 72 hours of continuous experiment -- about 350,000 operation cycles -- the iTENG generated electricity in an active animal, showing significantly improved in vivo reliability of our energy-harvesting device," Wang said.

The work is also the first demonstration of a self-powered, implantable wireless system for real-time in vivo monitoring through comprehensive experiments in large-animal scale, he said. Another milestone is that the team introduced a Titanium "keel structure" for fabricating iTENG, Wang added. "This will ensure the stable output performance of iTENG in the narrow implantation site," he said.

In its latest work, Wang's team utilized an encapsulation strategy with biocompatible materials, using polytetrafluoroethylene for its strength, a polydimethylsiloxane layer to ensure the shell would not leak, and Parylene film to form a high-density and hole-free coating layer to circumvent potential erosion for in vivo environments, Wang said. "All layers were deployed with a thickness of micro-scale to maintain the sensitivity and flexibility of iTENG," he added.

Researchers also showed that not only can biomechanical energy be harvested and used by iTENG, but that it can be wirelessly transmitted as data for physiological cardiac monitoring, Wang said.

Overall, the latest work not only has implications for implantable devices, but also could one day be used to fabricate an entire self-powered, wireless healthcare monitoring system, Wang said.

Researchers published an article about their work in the American Chemical Society's Nano journal. They plan to continue to work on the iTENG to improve its durability and reliability features for medical applications, Wang said.