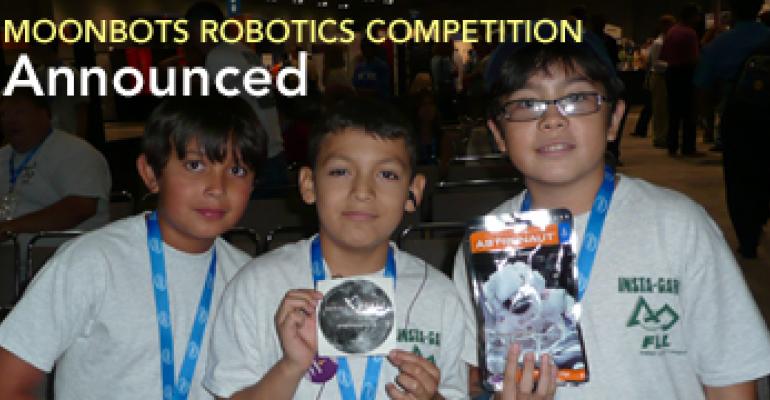 Created with the explicit goal of getting kids interested in learning about technology and robotics, the contest is modeled after the Google Lunar X Prize Competition, which will award a $30M prize to the first privately funded team to make it to the moon.

"The teams will do here on earth what the Google Lunar X PRIZE competition is doing in space," said Steven Canvin, Marketing Manager for LEGO MINDSTORMS.

In the first phase of the four-month competition, teams are required to submit a project description and concept drawings for their lunar mission. A smaller number of entries will then advance to the second round, where they will build MINDSTORMS robots and test them on a model lunar landscape.

Introduced in 1998, LEGO MINDSTORMS is a line of Lego sets that include programmable Lego bricks with electric motors, sensors, and mechanical parts such as gears and axels. NI's LabVIEW software is used to program the devices. The product has had broad reach into kindergarten through middle school-age group, through programs such as the First LEGO League. Approximately 150,000 kids globally now participate annually in the robotics competition.

Eight kids from the local Insta-gator First LEGO League team, representing Gattis Elementary school in Austin, were on hand at the press conference to consume the free astronaut ice cream and discuss tactics for the upcoming competition. "I'd just do a regular rocket, but with more engines," declared one eager contender.

The Insta-gator team is taking the MoonBots competition seriously as it looks to extend its current winning streak. Coach Mary Dubois says the team beat out the older and more experienced middle school team in the most recent FIRST LEGO League competition - a performance so outstanding that the team is eligible for funding from the Round Rock School District for the coming year.

"What's so great about the competition is that it's treated just like any other sport. Kids have to be in good standing with teachers, try out for the team (by writing an essay on why they should participate), come to practice, wear uniforms, and compete - and they handle it all very professionally," says Dubois.

The MoonBots challenge will not be the first time that LEGOs robots have been designed for space, and in fact a few of them have actually made it up there. "In a High Altitude Lego Extravaganza a few years back, 8 robots went up to an altitude of 100,000 ft," recalled Canvin. One of the robots, he noted, survived the ultimate drop test when its parachute failed to deploy on descent. Fortunately, that's one environmental hazard MoonBots teams won't have to design for.

The MoonBots Challenge is open to teams globally and there is no charge to enter. Competition rules and details can be found at www.moonbots.org.