MIT's MultiFab Can 3D Print 10 Different Materials at Once

MIT's MultiFab 3D printer can print 10 different materials at once, has an open-platform design, and can be built for under $7,000.

Sound impossible? It's not. Can you buy that printer now? Not yet. But you can start building one yourself: the new open-platform machine from a team at MIT uses off-the-shelf hardware and they include lots of details in their paper presented at SIGGRAPH 2015.

Javier Ramos, a research engineer at MIT's Computer Science and Artificial Intelligent Lab (CSAIL), co-authored the paper with members of professor Wojciech Matusik's Computational Fabrication Group, which investigates digital manufacturing and computer graphics. The paper and the supplementary material it references, including complete details on how the printer and its subsystems are built and assembled, plus materials sources is available on the MultiFab project page. The paper also describes the printer's Fabricator application, which runs on the CPU, and provides an open API the modules use for interfacing with the Fabricator.

The MultiFab 3D printer uniquely integrates a machine vision system for self-calibration of printheads, 3D scanning, and self-corrections to prints made with closed-loop feedback. This one feature simplifies the machine's design and makes it possible to 3D print on or around existing parts, like printing optical lenses on top of LEDs, or placing your iPhone in the printer and programming the system to print a case around the phone.

MultiFab is high-resolution, 40 microns or better just like high-end commercial 3D printers. So it isn't a speed king, but its print times aren't too shabby, either: two hours for an LED lens, for example, and longer, of course, for larger and more complex objects. Yes, we did say "lens" — the materials library presently includes 15 UV-curable photopolymers with a wide range of optical, mechanical and appearance properties, including rigid, elastic, high refractive index, and low refractive index materials, as well as a support material. Instead of the several hundred dollars per kg cost of materials for high-end commercial machines, this printer's materials cost is about $20 per kg. 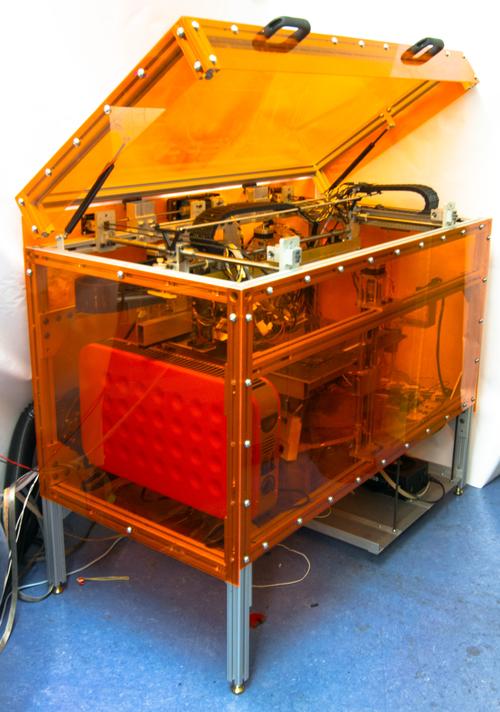 The equipment itself is not very expensive compared to what's on the market now, Lux Research analyst Anthony Vicari told Design News. The closest comparisons handle only three materials and cost $50,000 to $300,000. "All the other numbers they reported, such as speed and resolution, are pretty standard," Vicari said. "But the open platform design, the off-the-shelf hardware and the open API exposing more of the layers close to the hardware — these make a huge difference in terms of what a skilled user can do with such a system. This is potentially more disruptive then just adding a few more print heads."

In a news release from Lux Research, Vicari said, "MultiFab's enhanced multimaterial capabilities, open platform, and order-of-magnitude cost reduction potential are high-value, high-impact challenges to the status quo among leading 3D printer companies and offer a clear path to affordably printing polymer parts with a much wider range and combination of properties."

The combined benefits of the machine and its materials present "a stark challenge" to the hardware, software and business models of incumbent polymer 3D printer makers. If the MIT machine's claims are true, then the price, performance, and adaptability of machines based on this design will quickly capture market share. In particular, the printer's self-calibration system can increase part-to-part consistency, historically a major factor limiting the adoption of 3D printing for manufacturing end-use parts. The system's open platform will also help accelerate development by encouraging experimentation with new design modifications in industrial polymer printers.

The MultiFab team said several things have been done in the printer's design to keep costs down. In addition to off-the-shelf components — such as adapting piezoelectric drop-on-demand printheads used in consumer 2D printers — the machine itself is architected to be both modular and extensible. It can be reconfigured by adding or removing different modules controlled by dedicated MCUs: the positioning subsystem, UV-curing module, 3D scanning module, material feeding subsystem, and multiple printhead modules. Each module's MCU communicates with the central processor via Ethernet or USB. Curing is done via LEDS, which is safer and cheaper than the typical gas-discharge method.

Computer graphics is one main application for the MultiFab. For example, better displays can be made by combining custom optics, such as Multi-Fab-printed high-quality microlens arrays, with traditional display elements. Another is printable fabrics, made by 3D printing rigid or elastic fiber materials. Complex components like circuits and sensors could be embedded in the body of an object, producing a finished product with moving parts in a single build. Team members envision an array of applications in consumer electronics, microsensing, medical imaging, and telecommunications, among others. They also plan to embed motors and actuators to 3D print more advanced electronics, possibly even robots. 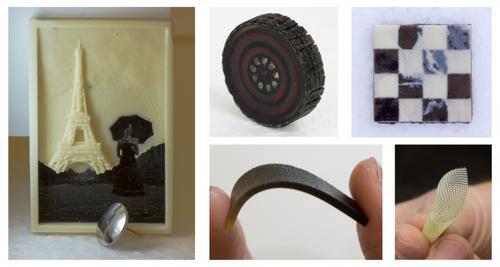 According to the new MIT paper, MultiFab supports two open source methods for simplifying multimaterials 3DP software and making it more efficient that were designed by MIT teams two years ago. We told you about the two groups of researchers in CSAIL's Computation Fabrication Group that presented papers on these methods at SIGGRAPH 2013: "OpenFab: A Programmable Pipeline for Multi-Material Fabrication," by Kiril Vidimce, et al, and "Spec2Fab: A Reducer-Tuner Model for Translating Specifications to 3D Prints," by Desai Chen et al. One method, OpenFab, addressed defining the material composition of an object, and the other, Spec2Fab, addressed defining an object's functional goals.

OpenFab is a programmable pipeline streaming architecture inspired by the RenderMan CGI software used in movies, aimed at reducing the computational complexity and cost of modeling. It attempts to make it easier to specify what materials, with which properties, engineers want in different parts of a printed object. In contrast, Spec2Fab is for those who don't care about materials, just the design goal. The software optimizes the design for placement of materials to achieve that goal.

MORE FROM DESIGN NEWS: These 7 3D Printed Engines and Parts Are Ready for Takeoff