These Vibrating Insoles Could Make You a Better Athlete

Anyone with knee or back issues, or trouble walking or running, has probably been told at some point to take a look at their shoes. Maybe your orthopedist told you to run down to CVS and pick up a pair of new insoles. Now, thanks to new research from the Wyss Institute for Biologically Inspired Engineering at Harvard University, insoles are getting an electronic touch that not only aids in therapeutic applications but could also enhance athletic performance.

Two recent studies in the Journal of Biomechanics and Medicine & Science in Sports & Exercise,  respectively, have shown that the Wyss institute's insoles, which electronically deliver vibration stimulation to the feet, have been demonstrated to improve performance in athletes as well as balance, and may also help to prevent injuries from falls in recreational athletes. Previous research has also shown the insoles to be effective in improving balance in both the elderly and in young people. 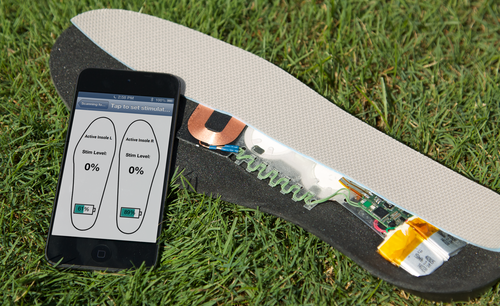 The vibrating insoles developed at the Wyss Institute at Harvard stimulate the wearer's feet with imperceptible vibrations that can be adjusted wirelessly via smart phone.

Subjects were tested on their performance on a hexagonal jump task, a common agility drill used by coaches and trainers of NCAA Division 1 athletes. While wearing the vibrating insoles, study participants (20 recreational athletes ranging in age from 18-40) completed the hexagonal jump task just as accurately and more than a tenth of a second faster than they did without the insoles. It may seem like a small difference, but the researchers at Wyss said this tiny increase in speed can represent a 10-20 percentile ranking difference in NCAA Division I athletes. "Both studies further validate our initial hypothesis that a mechanically stimulating 'wearable' device, such as vibrating insoles, can positively impact wellness and performance benefits for many activities," said Daniel Miranda, PhD, a Wyss Institute Technology Development Fellow, and co-author of the studies.

The insoles are based on the principle of stochastic resonance (SR), which boosts sensory detection through the use of imperceptible vibrations. The idea is that the extra sensory input enhances sensory nerve performance, which in turn leads to improvements in gait, balance, and movement. SR is a natural phenomenon that has been observed in neurons in the past but has found therapeutic applications through the work of Dr. James Collins, a bioengineer and core faculty member at the Wyss Institute. This latest development builds upon Collins' work, using small piezoelectric actuators, embedded in the insole within urethan foam, to deliver imperceptible mechanical vibrations to the wearer's feet.

The insoles used in the studies were tethered to the participant with a 30-foot cable that allowed the degree of vibration to be adjusted and controlled. However, the Wyss Institute has announced it has already developed a version that allows for wireless charging and control via smartphone. "The finished product looks like something you could find on a shelf at a sporting goods store," Miranda said. "The design engineering that was done to bring these insoles toward a real-world product was uniquely possible at the Wyss -- the different device iterations along the way were direct results of a feedback loop between our research scientists and engineers, and our clinical collaborators."

According to Collins and Miranda, the insoles have already been licensed for therapeutic applications and show the most promise as a rehabilitation aid for patients suffering from injuries, nerve damage, or central nervous system issues such as diabetes or cerebral palsy.

But Miranda added that more research is needed to determine the long term effects of SR. "Improving the ability of the somatosensory system to detect weak stimuli may help to support proper neuromuscular control. This support, over a long duration, might help during training and rehabilitation to strengthen the musculature and improve outcomes even after the insoles are removed," he told us. "Work from Ross and Guskiewicz has actually shown that SR stimulation, when used in combination with a training program, might improve dynamic postural stability more quickly and to a greater extent then a training program alone in patients recovering from functional ankle instability."

Wyss researchers said the next stages in SR research will involve applying it to other conditions and sports. The Journal of Biomechanics study suggests that the wireless version of the insole could be used during professional athlete training and even actual competition to study their effects on performance

But would athletes wearing these insoles be labeled as cheaters? "Maybe? I'm sure glad I don't need to make the final decision on this one!" Miranda told us. "In all seriousness, this is certainly an interesting and potentially valid concern. Though, I am sure there are a number of parents that would love to have all the performance benefits they can get while playing driveway basketball or backyard soccer with their teenager. Level the playing field so to speak."

END_OF_DOCUMENT_TOKEN_TO_BE_REPLACED

Please wait a moment while we find a poll.
END_OF_DOCUMENT_TOKEN_TO_BE_REPLACED