HomeIndustryMedicalSlideshow: Robot Salamanders, Snakes & Bugs; Creepy Defined
Recent
Industry
Argo AI Expands to Austin and Miami in Search of More Challenges
May 18, 2022
12 Ideas that Could Change the World
May 18, 2022
Making the AC Power Main Intelligent
May 18, 2022
How to Make Sure Your Digital Transformation Doesn’t Fail
May 18, 2022
POLL
The Internet's Grooviest Slideshow of Legendary International Scouts
May 17, 2022
Electronics Industry Bolsters Root of Trust Security Efforts
May 17, 2022
3 Tips for Embedded Software Configuration Management
May 17, 2022
Novel 3D Printing Method Used to Replenish Coral Reefs
May 16, 2022

Some of these robot bugs have very creepy, realistic movements. Many of the snakes and amphibians are designed for inspection or search and rescue operations, while the bug robots are more often aimed at working out specific theoretical problems.

There are a lot more robotic bugs out there now than there was the last time we did a robot bugs and worms slideshow. Some are very tiny -- as small as a penny -- and some are a lot bigger, like the hexapod that weighs more than two tons. Most are remote-controlled, or capable of being controlled wirelessly. Some of the bugs have very creepy, realistic movements. Many of the snakes and amphibians are designed for inspection or search and rescue operations, while the bug robots are more often aimed at working out specific theoretical problems.

When possible, I like to include toy robots in these slideshows because often their abilities seem at least as advanced as some of the more industrial-strength machines being developed in R&D labs. For example, the Roboboa from our previous robot snakes and worms slideshow has moves that compared quite well with other robots in that article: it can rotate, swivel, spin, lift itself, and rove around. The present slideshow is no exception. Click on the photo below to start it! 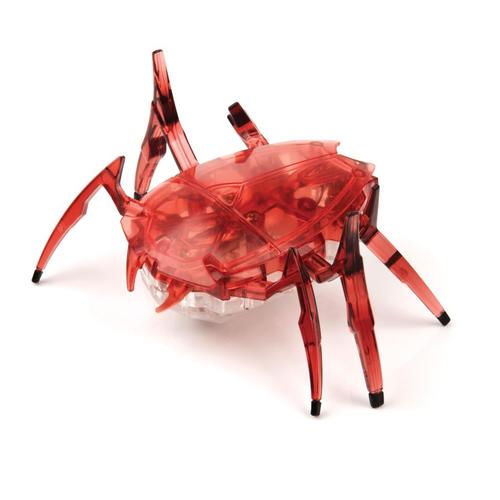 "Skittering" and "scuttling" are words the HEXBUG Scarab's maker uses to describe its movements. This brightly colored toy runs and jumps a lot like a real six-legged bug, and its does so really, really fast. Scarab's creators, Innovation First, decided to rely on mechanics instead of programming and sensors, in designing its actions. The Scarab XL version, a remote-controlled bug, moves its legs back and forth 1,200 times a minute using a motor and 16 gears. By making the legs slightly different lengths, the robotic bug has more random and lifelike movements, including not-entirely-straight directions and unexpected left or right turns. It can also right itself if it gets turned upside down. Scarab XL measures 3.5" x 7" x 4.75", weighs 10 oz, and requires 3 AA batteries plus a 9V battery for the remote.
(Source: Innovation First)

Check out this video of the HEXBUG Scarab. Its movements are highly natural and creepily accurate.