A new ultra-stretchy, self-healing material developed by researchers at Stanford University could be a breakthrough for artificial muscle technology.

A new ultra-stretchy, self-healing material developed by researchers at Stanford University could be a breakthrough for artificial muscle technology, according to researchers.

A team in the lab of university chemical engineering Professor Zhenan Bao developed the material almost by accident, when Cheng-Hui Li, a Chinese visiting scholar, was testing how much a rubberlike type of plastic known as an elastomer he’d just synthesized could stretch.

Rather than using a clamping machine to test the material until it snapped because the machine could only stretch it 45 inches, Li and another lab member held the material in their hands and stood further and further apart. To their surprise, a one-inch polymer film stretched to more than 100 inches.

Its stretching ability was not all that impressed Bao and her team members, researchers said. The material also had self-healing characteristics, with the ability not only to repair itself at room temperature, but also at temperatures as low as negative 4 degrees Fahrenheit, which is about the temperature of a commercial walk-in freezer. 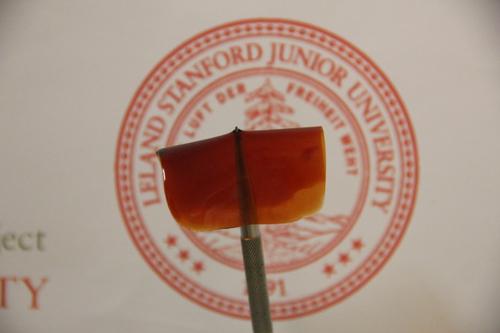 A new, extremely stretchable polymer film created by researchers at the Stanford University lab of chemical engineering professor Zhenan Bao can repair itself when punctured. This feature is key to a material with potential applications for use in artificial muscle, among other applications.
(Source: Bao Research Group, Stanford University)

This self-healing capability is in contrast to typical damaged polymers, which normally require a solvent or heat treatment to repair and restore their original properties, researchers said. It also made the material behave more like actual human muscle, which is not only extremely stretchy, but can repair its own tears.

For this reason, the material could one day be used in the development of artificial muscles for implants as well as for a number of other applications, Bao said. Those include wearable electronics that need to be flexible or in other types of medical implants that require durability and must last a long time without the need for repair or replacement, she said.

Researchers worked together for two years to develop the material. In addition to Bao and Li, others who worked on the project include polymer chemist Chao Wang, now an assistant professor of chemistry at the University of California, Riverside, and artificial muscle expert Christoph Keplinger, now an assistant professor of mechanical engineering at the University of Colorado, Boulder. They and other contributors published a study of their work in the journal Nature Chemistry.

In the paper, the team outlined how improvements in a type of chemical bonding process known as crosslinking allowed for the stretchability and self-healing ability of the material they developed. The process involves connecting linear chains of linked molecules in a pattern not unlike a fishnet, which allows for significantly more stretch in polymers, according to researchers.

The team designed organic molecules to attach to the short polymer strands in their crosslink to create a series of structure called ligands, which joined together to form longer polymer chains, or spring-like, stretchy coils. Metal ions were then added to the ligands. When this combined material experiences strain, the knots loosen and allow the ligands to separate. But when relaxed, the affinity between the metal ions and the ligands pulls the fishnet taut. This is how the team was able to design the strong, ultra-stretchable and self-repairing elastomer, Bao said.

“Basically the polymers become linked together like a big net through the metal ions and the ligands,” she said. “Each metal ion binds to at least two ligands, so if one ligand breaks away on one side, the metal ion may still be connected to a ligand on the other side. And when the stress is released, the ion can readily reconnect with another ligand if it is close enough.”

Researchers will continue to experiment with the material and explore its various applications.