The 'SAW' Robot Uses One Motor to Crawl, Climb, and Swim

The Single Actuator Wave-like Robot (SAW) is the first to produce a continuously advancing sine wave with a single motor for locomotion. It can crawl both forward and backward, climb, and swim over long distances.

Robotic motion is a longstanding R&D goal, and engineers have come up with a huge variety of ways to make robots move. As we've reported, they may slither, crawl, swim. They may even walk, like a human, a cockroach, or a salamander.

Some researchers approach the task of making robots move from a more theoretical perspective that happens to coincide with the biomimetics approach, which emulates the gait of an actual animal. A notorious example is the Multi-Appendage Robotic System (MARS) designed at Virginia Tech's Robotics & Mechanisms Laboratory, now housed at University of California, Los Angeles.. The MARS project's original goal was to develop a walking gait system for negotiating terrain with variations in height, so its legs are spaced axi-symmetrically around its body. The result is a robot that looks like a giant, six-legged spider. 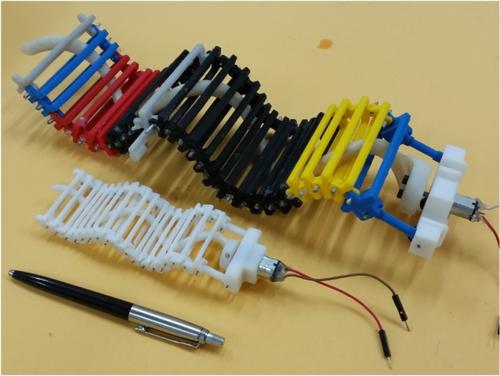 The Single Actuator Wave-like Robot (SAW) could be scaled up and built in larger versions for maintenance or search and rescue applications, and scaled down to under a centimer in diameter for medical applications.
(Source: Ben-Gurion University of the Negev)

Now engineers at Ben-Gurion University of the Negev have developed what they say is the first robot that produces a wave motion with a single motor. Inspired by the locomotion of snakes, the Single Actuator Wave-like Robot (SAW) looks like a child's toy, but it moves both forward and backward by producing a continuously advancing sine wave.

This talented machine can climb vertically through tunnels and crawl over multiple surfaces, like sand, grass, and gravel, using its passive wheels only for steering. Its top speed is 57 cm per second in horizontal motion, which is five times faster than any similar robot, and it can also crawl backward, as you can see in this video. Top climbing speed is 8 cm per second.

This simple robot is the first that produces a continuously advancing sine wave with a single motor for locomotion. It can move both forward and backward, and can climb and swim as well as crawl.
(Source: Ben-Gurion University of the Negev)

Led by David Zarrouk, a senior lecturer in the university's mechanical engineering department, the team designed the robot for medical, maintenance, search and rescue, and security applications. It could be scaled up and built in larger versions for maintenance or search and rescue, and scaled down for medical applications. The SAW robot is strong, reliable, requires little maintenance, easy to manufacture, and energy-efficient, enabling it to travel long distances.

The team published its results in a July paper in the journal Bioinspiration & Biomimetics. "We developed a kinematic model of the robot that accounts for the two-dimensional mechanics of motion and yields the speed of the links relative to the motor," the team said in the paper's abstract. "By optimizing the parameters, we succeeded in making the robot travel by 13% faster than its own wave speed."

According to the abstract, the robot does not have an internal straight spine, and its direction of locomotion is determined by the direction of rotation of the motor. At 1:42 in the above video, the camera angle gives a view of the robot's movement that shows what looks like a spiral-shaped spine threaded through its links.

Since the SAW robot's design is simple and it only requires one motor, the researchers also built two smaller versions. One, only slightly smaller, is also waterproof. This version can swim at a top speed of 6 cm per second. A much smaller version is the size of a pen. Even further miniaturization is possible, such as very tiny robots with a diameter of 1 cm or less that can be used to travel within the human body during diagnostic procedures, such as for imaging biopsies.

Recording the Brain at Work with Thousands of Sensors
Jun 23, 2021