A mind-controlled mechanical hand, developed by DARPA and researchers at Johns Hopkins university, gives a paralyzed patient the ability to “feel” physical sensations.

Working with researchers in the Applied Physics Lab at Johns Hopkins University, DARPA was able to give a 28-year-old test patient who’s been paralyzed for more than a decade as a result of a spinal cord injury the ability to “feel” physical sensations through a mechanical hand connected directly to his brain.

Researchers at Johns Hopkins developed the mechanical hand, which was wired to electrode arrays on both the patient’s sensory cortex and motor cortex. This allowed him to control the movements of his hands with his thoughts, marking the second time DARPA has achieved this with a paralyzed person. Additionally, sophisticated torque sensors in the hand can detect when pressure is being applied to any of its fingers, and converting those physical “sensations” into electrical signals. 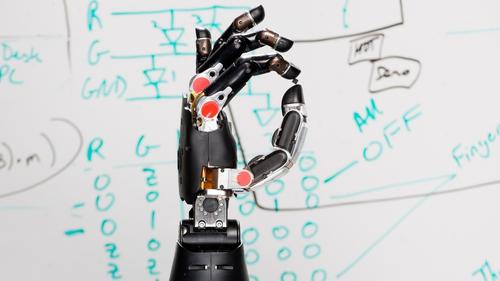 “We’ve completed the circuit,” Sanchez said. “Prosthetic limbs that can be controlled by thoughts are showing great promise, but without feedback from signals traveling back to the brain it can be difficult to achieve the level of control needed to perform precise movements. By wiring a sense of touch from a mechanical hand directly into the brain, this work shows the potential for seamless bio-technological restoration of near-natural function.”

Researchers conducted a number of tests on the patient to ensure that the connections between his brain and the hand were legitimately giving him a sense of touch, according to DARPA. In first tests, researchers gently touched each of the prosthetic hand’s fingers while the volunteer was blindfolded. With nearly 100 percent accuracy he was able to report which mechanical finger was being touch, saying that he felt as if his own hand was being touched, according to DARPA.

“At one point, instead of pressing one finger, the team decided to press two without telling him,” Sanchez said. “He responded in jest asking whether somebody was trying to play a trick on him. That is when we knew that the feelings he was perceiving through the robotic hand were near-natural.”

DARPA is conducting various research in prosthetics to improve the experience for the user. The agency recently awarded a $6.98 million contract to DEKA Innovative Solutions Corp. to continue development of another next-generation prosthetic called the DEKA Arm System. The funding was made available through DARPA’s Hand Proprioception & Touch Interfaces (HAPTIX) program.