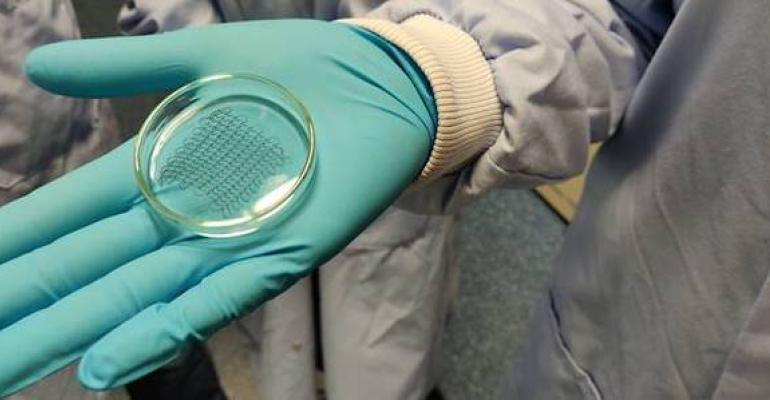 Bioengineers at Trinity College in Dublin have used melt electrowriting technology to produce a patch that can withstand the mechanical demands of a beating heart while mimicking its electrical signaling properties.

A prototype polymer-based patch has been developed that could be used to repair heart tissue following a heart attack, for example. Bioengineers at Trinity College in Dublin said that the patch can withstand the mechanical demands of a beating heart while mimicking its electrical signaling properties. A paper describing the research was published in Advanced Functional Materials on Feb. 12, 2020.

Cardiac patches lined with heart cells can be applied surgically to restore heart tissue in patients who have had damaged tissue removed after a heart attack and to repair congenital heart defects in infants and children. Ultimately, though, the goal is to create cell-free patches that can restore the synchronous beating of the heart cells, without impairing the heart muscle movement, explained a press release on the Trinity College website.

The mechanical demands of heart muscle (or myocardium) cannot be met using polyester-based thermoplastic polymers, which are predominantly the approved options for biomedical applications. However, the functionality of thermoplastic polymers could be leveraged by its structural geometry. The bioengineers then set about making a patch that could control the expansion of a material in multiple directions and tune this using an engineering design approach.

“Ours is one of few studies that looks at a traditional material, and through effective design allows us to mimic the direction-dependent mechanical movement of the heart, which can be sustained repeatably,” said Michael Monaghan, Assistant Professor in Biomedical Engineering and senior author of the paper. “This was achieved through a novel method called melt electrowriting, and through close collaboration with the suppliers located nationally we were able to customize the process to fit our design needs.”

The patches are coated with the electro-conductive polymer polypyrrole to provide electrical conductivity while maintaining cell compatibility.

The prototype patch withstood repeated stretching, which is a dominant concern for cardiac biomaterials, and showed good elasticity to accurately mimic that key property of heart muscle, said the press release.

The researchers now are “looking forward to furthering the next generation of designs and materials, with the eventual aim of applying this patch as a therapy for a heart attack,” said Monaghan.