Two new free extensions to the open standard 3MF file format for 3D printing have been released by the 3MF Consortium. Both are aimed at high-volume additive manufacturing operations run by either service bureaus or large OEMs.

The 3MF Consortium, which released its free initial core specification last year for a new 3D printing file format, has added two free extensions based on best practices. One makes it easier for engineers to better manage print operations, and the other increases efficiency by providing a single slice methodology. Both are aimed at high-volume additive manufacturing (AM) operations run by either service bureaus or large OEMs.

Both extensions will help move industry toward a more integrated approach to volume end-production manufacturing using 3D printing, the consortium's executive director, Adrian Lannin, told Design News. "When companies want to get started using 3D printing for manufacturing, there are so many roadblocks and hurdles and barriers to efficiency along the way," he said. "Our mission is to remove those roadblocks, make it easier to set up AM in an organization, and make people more efficient and productive when using it." 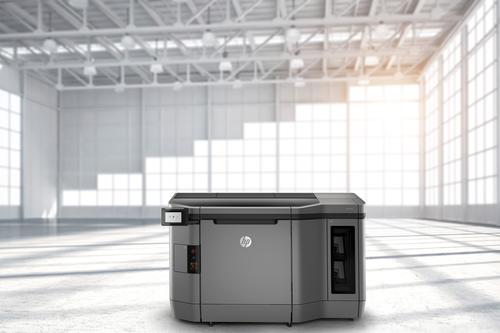 Two new extensions to the open standard 3MF file format for 3D printing have been released by the 3MF Consortium. Both will be fully implemented in HP Inc.'s upcoming Jet Fusion 3D 4200 Printer, and HP has said it's working with industry partners to ensure adoption of the extensions in their products, which already use the file format. HP's printers will be the first that are compliant with this new file format.
(Source: HP Inc.)

As has often been pointed out, Lannin said the problem with existing file formats is they're being used for jobs they were never designed to do, such as 3D printing. .STL, for example, was designed for CNC machines, where users don't have to worry about characteristics such as surface finish or color. "The 3MF file format, in contrast, includes information about things you do care about, like color or scale," he said.

Founding members of the 3MF (3D Manufacturing Format) Consortium are industry heavyweights: 3D Systems, Autodesk, Dassault Systèmes, FIT AG, GE Global Research, HP Inc., Materialise, Microsoft, Shapeways, Siemens PLM Software, SLM Solutions Group AG, Stratasys, and Ultimaker. They have said their goal is to define a 3D printing format that clears up interoperability problems with multiple applications, platforms, services, and printers, and makes it possible to send full-fidelity 3D models to all of them. The file format is open; can fully describe a model and retain characteristics such as internal information and color; is extensible so it can support new innovations in 3D printing; and is "practical, simple to understand, and easy to implement."

The consortium brings together major industry leaders to get general agreement on standard ways to approach particular problems, said Lannin. For example, the new 3MF Slice Extension came about because there are different proprietary software packages that do layer management, but each does it a different way. That means design engineers have to make sure these methods are compatible, matching the software to the particular hardware they're using. That, in turn, makes print problems more likely and increases the time needed the prepare the print job. "Members devoted hours of engineering time each week on real-world solutions," he said. "We harvested all the best practices from members and just picked one way, one slice methodology."

The new 3MF Production Extension is designed for high-volume users such as service bureaus. It addresses the organization and management of multiple parts in a print job, such as different parts for separate customers in a single run, said Lannin. The extension makes it easier by keeping separate parts in separate .XML files within the 3MF package, to divide the parsing load of a large job. The 3MF package maintains unique identifiers for each part instance, manages the relationships among the files, and manages the file hierarchy.

You can download the two new extensions, along with the previous materials & properties extension and the core specification, here.

HP Inc.'s head of product communications, Russ Castronovo, said that HP needs both extensions to take full advantage of the capabilities of its upcoming Jet Fusion printers, "to ensure that 3MF content can scale up for industrial-class machines, and to guarantee traceability of jobs, parts, and assemblies through the fabrication process. HP has fully implemented both extensions in our first products and we are working with industry partners to ensure adoption of the extensions in their products as well." HP's printers will be the first that are compliant with this new file format.

Coming up are several things the consortium is working on, Lannin told us. One of those is the fact that 3D files tend to get large. "We're thinking about how to address that next."