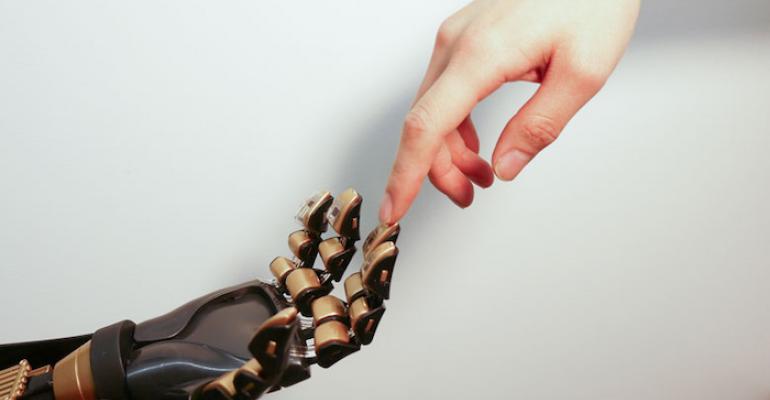 Check out this timeline that shows the incredible progression of modern robotic-based human prosthetic augmentation from the 1950s to today.

Ever the adaptive species, human beings have long used technology to augment their natural capabilities. Even pre-historic cave dwellers used obsidian rocks to sharpen sticks into fine points, effectively extending their arms and thus the targets they could hit.

Today, humans use electronic and mechanical technology to physically augment their bodies. This is done attaching or implanting some type of device to improve their capability to go beyond the current human experience, e.g., 3D-printing an appendage or interfacing directly with the digital world through a brain-computer interface (BCI). The former is an example of how technology can enhance a person’s physical capabilities while the latter is related to cognitive improvements.

Like our cave dwelling ancestors, many of today’s augmentations offer fairly simple improvements. Consider the example of an extra thumb. That’s exactly what Dani Clode, a grad student at London’s Royal College of Art (RCA), has done with her third thumb project. This augmentation is a 3D-printed prosthetic that simply extends a user’s grip. The extra thumb straps onto the hand, which connects to a bracelet containing wires and servos. The wearer controls the thumb via pressure sensors located under the soles of their feet. Pressing down with one foot will sent a signal via a Bluetooth device that will cause the thumb to grasp.

Be it simple or complex, human augmentation has made the list of Gartner Top 10 Strategic Technology Trends for 2020. The report cites several growing market areas were implanted or hosted physical augmentations improve both workers health and the company’s financial bottom lines.  For example, the automotive or mining industries use wearables to improve worker safety. In other industries, such as retail and travel, wearables are used primarily to increase worker productivity.

The report lists four main categories of physical augmentation: Sensory augmentation (hearing, vision, and perception), appendage and biological function augmentation (exoskeletons, prosthetics), brain augmentation (implants to treat seizures) and genetic augmentation (somatic gene and cell therapy). Each of these categories are worthy of a separate discussion. For now, the timeline below will focus on one portion of the second category, namely, prosthetics.

Modern human augmentation sometimes called “Human 2.0,” would not be possible with the advances offer by semiconductor electronics (e.g., processors, memory, sensors and wireless tech) and the related advancement in robotics. Thus, our brief timeline starts with the advent of the transistor.

1954 – The first silicon transistor is fabricated by Morris Tanenbaum at Bell Labs but Texas Instruments' engineers build and market the first commercial devices. The transistor is the building blocks of modern robotics.

1997 – One of the first microprocessor-controlled prosthetic knees (from Ottobock) became available for people with above-knee amputations. These microprocessor knees use pressure sensors to determine the force applied to the missing limbs during walking. These knees mimic the functionality of a normal person’s gait. Also, carbon fiber was first used to provide a more life-like material to robotic limbs.

2006 - In this year, Defense Advanced Research Projects Agency (DARPA) began a multi-year funded program to create neutrally controlled artificial limbs. Part of the funding was for the “Revolutionizing Prosthetics” program. The goal of this program was to “address these challenges by restoring near-natural hand and arm control to people living with the loss of an upper limb.”

2007 - Marine Lance Cpl. Joshua Bleill received two artificial legs fitted with Bluetooth devices, which communicate to regulate stride, pressure and speed in the prosthetic legs. Programmable software could be used to adjust the gait to the needs of different patients.

In this year, the i-Limb hand debuted in the United Kingdom. This robotic prosthetic uses intensive myoelectric technology in which muscle sensors are placed against the skin at the site of the amputation. Electric signals generated by these muscles are used to control a microprocessor within the prosthetic. This technology enables greater controller in missing digits, allowing user to pick up coins and other small objects.

2013: 3-D printing technology was used to produce a prosthetic hand for a 5 year old boy, born without fingers on one hand.

2015: Johns Hopkins University developed a robotic arm with, “26 joints that can curl up 45 pounds and is controlled by a person’s mind just like a regular arm.”

2016: Prosthetic skin is part of ongoing research at Stanford University and the Palo Alto Research centers. This skin simulates the feeling of touch in a lost limb by sending pressure sensations to a living brain cell. The work takes a big step toward adding a sense of touch to prosthetic limbs.

2016 - “LUKE” or Life Under Kinetic Evolution is a prosthetic arm that enable dexterous arm and hand movement with grip force feedback. It is a battery powered hand and arm in which a variety of inputs are used to control multiple joints. The technology features wireless signals from sensors worn on the user’s feet. LUKE is part of DARPA’s Revolutionizing Prosthetics program

2017 – Imec, a leading Flemish nano-electronics and digital technology R&D organization, fabricated a prototype implantable chip that aims to give patients more intuitive control over their arm prosthetics. The thin-silicon chip is a world’s first for electrode density and was developed in collaboration with researchers at the University of Florida, as part of the IMPRESS project funded by the DARPA’s HAPTIX program to create a closed-loop system for future-generation haptic prosthetics technology.