HP Inc. was at the Autodesk University 2015 conference in Las Vegas in December, talking up its latest 2D printers, and giving out more information about its Multi Jet Fusion 3D-printing technology and product launch.

We covered the introduction of the now split-up company's 3D-printing technology a year ago, including details from an in-depth white paper and a follow-on webinar. Not much has changed since then in the way of more details about how the technology works or the product launch. HP did announce at CES 2015 that it would be using Intel microprocessors in its 3D printers. 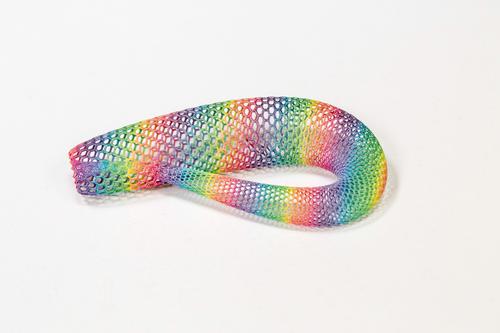 This image illustrates how the HP Multi Jet Fusion multi-agent printing process, by placing specific colors at the voxel level, enables color gradients throughout a part. The same process can also print different mechanical properties, such as elasticity variations, throughout a part via the use of transforming agents.
(Source: Krasul)

As we reported previously, MJF will use imaging of a wider build envelope, up to 40 inch, to boost speeds 10 times over existing SLS (selective laser sintering) and FDM (fused deposition modeling) build times. Arrays of thermal inkjets will apply liquid agents to increase uniform part strength. Control over part and material properties will be much greater than those in other 3D-printing processes, and will include texture, friction, strength, and electrical and thermal properties.

Control over properties will be done at the voxel level, Luis Baldez, software strategy program manager for HP Inc.'s 3D printing business, told Design News. This is unique to MJF technology and will eventually be enabled on future platforms. "Imagine a product that combines an injection-molded rigid material housing, another part that's made of a rubber-like material, and another that has electronic traces," he said. "What if you could print them all in one part with multiple behaviors: soft, rigid, or electrical traces? The long-term vision for HP MJF technology is to create parts with controllably variable, even quite different, mechanical and physical properties within a single part, or among separate parts processed simultaneously in the working area. This is accomplished by controlling the interaction of the fusing and detailing agents with each other, with the material to be fused, and with additional transforming agents."

Baldez said the first printer will be available toward the end of 2016, a single-color machine that does not have voxel-level properties control. Details including size, materials, and pricing aren't yet available. Other models will follow.

He also said there are several misconceptions about MJF. Many are because this technology works so differently from other 3D-printing processes that it's not easy to extrapolate what the differences will be. For example, it will not sacrifice detail level and surface finish for part strength, or vice versa. "Two common 3D-printing technologies are binder jetting and photopolymerization," he said. "People often think that the way binder jetting and photopolymerization work is the way that all 3D printing works. In both those cases, the parts produced may have a good level of detail, but the stability of the part over time varies, depending on the application. But with HP Multi Jet Fusion technology, our target is to provide part quality similar to parts made with injection molding in both strength and surface finish."

To achieve quality at speed, HP invented a proprietary, multi-agent printing process where the agents are applied by HP Thermal Inkjet arrays, giving MJF a versatility and potential not found in other 3D-printing technologies. The way the HP printheads operate is different and the results are different from other 3D-printing technologies on the market.

Many existing additive processes fuse or cure materials together at a focused point, for example using a focused laser beam to fuse, or a single nozzle to extrude. This point processing limits the build speed of these technologies, said Baldez. For parts to work correctly, the material must be properly fused and part edges must be smooth and well-defined. 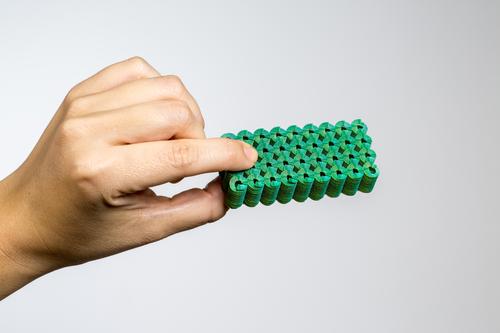 The material bonding made possible by MJF is much stronger than other technologies can produce, enabling better mechanical properties. That's because, in the MJF multi-agent printing process, a fusing agent is selectively applied where the particles are to fuse together, and then a detailing agent is selectively applied where the fusing action needs to be reduced or amplified. The detailing agent reduces fusing at the boundary to produce a part with sharp and smooth edges. Next, the work area is exposed to fusing energy, and the process is repeated until a complete part has been formed. This is a general sequence of the steps in MJF technology, but in specific hardware implementations the order of steps may be rearranged, said Baldez. MJF technology can achieve higher quality at speed because of its HP Thermal Inkjet arrays with their high number of nozzles per inch.

Another misconception exists about the relationship between resolution and speed: usually one is sacrificed for the other, said Baldez, who was involved in developing some of the MJF technology. MJF is based on HP's 2D Thermal Inkjet technology. Those printheads have very high resolution, from 600 dpi up to 2,400 dpi, equivalent to a range of 42 microns to 11 microns. At these resolutions, an error of only a few microns would mean poor quality text. "One thing we learned in 2D printing was how to fire drops very precisely at very high speeds, and we've leveraged this expertise in 3D printing," he said.

One misconception is even more fundamental, and explains how MJF technology can be so different. Since HP owns every single bit of its Thermal Inkjet technology end to end, it can change it any way it wants, and create new technology that's completely different from anyone else's. This contrasts with other 3D printhead technologies: they not only operate differently, but no single company owns all of the related technologies. Also, HP has already built a whole portfolio of fully tested printheads to choose from, said Baldez.