The Department of Defense is making a nearly $7 million investment to further development on a prosthetic device that allows for movement and functionality that’s nearly the same as a normal human arm and hand.

The Department of Defense (DoD) is making a nearly $7 million investment to further development on a prosthetic device that allows for movement and functionality that’s very close to a normal human arm and hand.

The Defense Advanced Research Projects Agency has awarded a $6.98 million contract to DEKA Innovative Solutions Corp. to continue development of the so-called “Luke Arm,” nicknamed for the fictional robotic arm given to the character Luke Skywalker in the Star Wars film series, according to a contract announcement on the DoD website. The prosthetic’s official name is the DEKA Arm System. 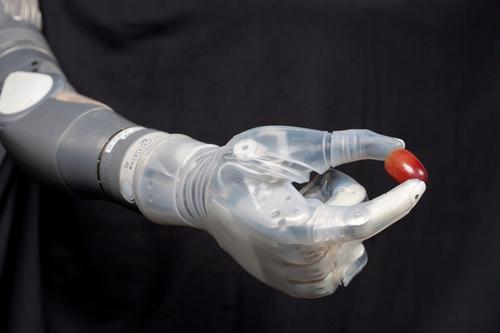 The DEKA Arm System -- also known as the "Luke Arm" after the robotic arm worn by Luke Skywalker in the Star Wars films -- is the most sophisticated device of its kind. DARPA has just awarded DEKA, run by Segway inventor Dean Kamen, $7 million more in funding to continue research on the arm for a wider range of applications.
(Source: DEKA)

DARPA had already funded the prosthetic developed by DEKA -- led by Segway inventor Dean Kamen -- with $40 million over eight years through its Revolutionizing Prosthetics program. The agency founded the program in 2006 to develop more realistic prosthetics for soldiers who’d lost limbs in the US military engagements in Iraq and Afghanistan.

MORE FROM DESIGN NEWS: 10 Technologies That Make Us Super-Human

The DEKA Arm System certainly has lived up to its mission. It’s the most sophisticated to date of prosthetic arms, with the ability to perform six types of grips and 10 different movements. It can respond to muscle contractions and its hand can grip and manage something as delicate as a grape and as powerful as a power tool.

The system works through actuation controlled by electrical signals from electromyogram (EMG) electrodes, according to the FDA, which approved the arm for commercial medical use in May 2014. The EMG converts electrical signals into 10 movements of the arm, which is the same shape and weight as an adult arm. In addition to the EMG electrodes, the DEKA Arm System contains a combination of mechanisms including switches, movement sensors, and force sensors that cause the prosthesis to move.”

The new funding from DARPA will go toward expanding existing DEKA Arm System functionality through the agency’s Hand Proprioception & Touch Interfaces (HAPTIX) program, according to the contract award notice. The contract also aims to manufacture and deliver prosthetic arms for use under the DARPA Revolutionizing Prosthetics Follow-on Studies (RPFS) program.

“The HAPTIX program will develop new science and technology to achieve closed-loop control of this dexterous mechatronic prosthesis in order to provide amputees with the feel and function of natural limbs,” according to the notice. “System performance and the ultimate benefit to prosthetic users will be determined in a year-long, take-home trial. These efforts will position the government with the required data to seek market approval and deliver the system into the wider patient population.”

Work done through the RPFS program will also provide the FDA an approved version of the arm system for research to inform its delivery through Medicaid and Medicare services, as well as to validate prescription criteria and distribute the arm to a wider patient audience, according to the notice.