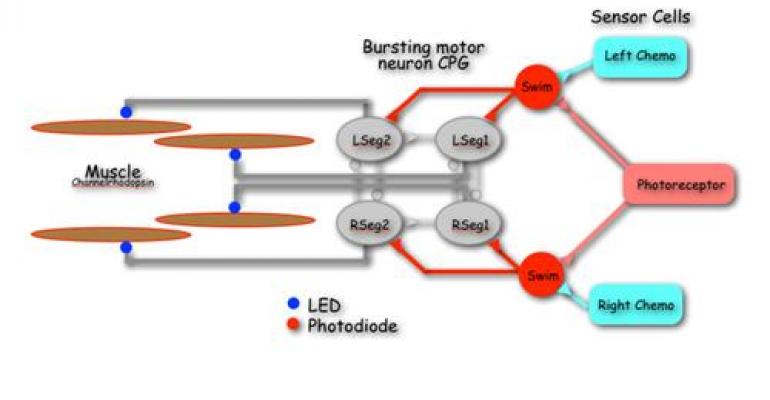 Cyberplasm is a multi-cellular micro-robot being developed by British and American researchers with the principles of synthetic biology.

It will combine biomimicry of some of a sea lamprey's behaviors with engineered cellular devices, electronics, and new methods of communicating between biological and electronic components. If this artificial organism looked like a human, we'd call it an android.

Perhaps the most amazing part of this research is the tightly coupled integration and communication the researchers want to design in between the micro-bot's electronic and biological components. On the cellular level, the team will integrate certain gene parts into bacteria, yeast, and mammalian cells so they can perform functions usually done by electronic devices. Bacteria and cells will be simplified so they can more easily communicate with electronic devices. 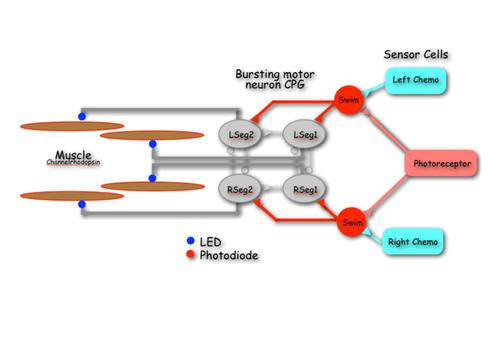 The 1-mm long Cyberplasm's microprocessor will generate signals that drive the robot's engineered synthetic muscles, derived from mouse cells, which will mimic the snake-like movements of a sea lamprey. Engineered synthetic sensors derived from yeast cells will detect signals from the 'bot's environment, which will then be processed by its electronic nervous system. The electronics will be powered by an internal microbial fuel cell.

The micro-bot's muscle cells will be engineered for the minimum of cellular machinery needed for functioning. Muscles will be powered like biological cells, using mitochondria to convert glucose to ATP, combining actuation with power generation. The 'bot will be equipped with chemical-detecting and light-detecting sensors.

The resarch team has two basic purposes for creating Cyberplasm. The first is fundamental research in the integration of bacteria into fuel cells, as well as the integration of yeast and mammal cells into biologically engineered sensor and actuator devices. There are also several longer-term applications. In healthcare, the sensing abilities of such tiny machines could be useful in drug delivery systems and biosensors. Cyberplasm's underwater chemical sensing abilities could also be used to detect mines and other unexploded ordnance, or find pollutants.

With funding from the National Science Foundation, the team is still defining the robot's individual components. It may take another five years to optimize the subsystems and integrate them all into one working system. The research team includes Christopher Voigt, associate professor of biological engineering at MIT; Daniel Frankel, a chemical engineer at Newcastle University; Joseph Ayers, professor of neurophysiology at Northeastern University; Yong-Bin Kim, professor of electrical and computer engineering at Northeastern University; and Vladimir Parpura, associate professor of neurobiology at the University of Alabama at Birmingham.