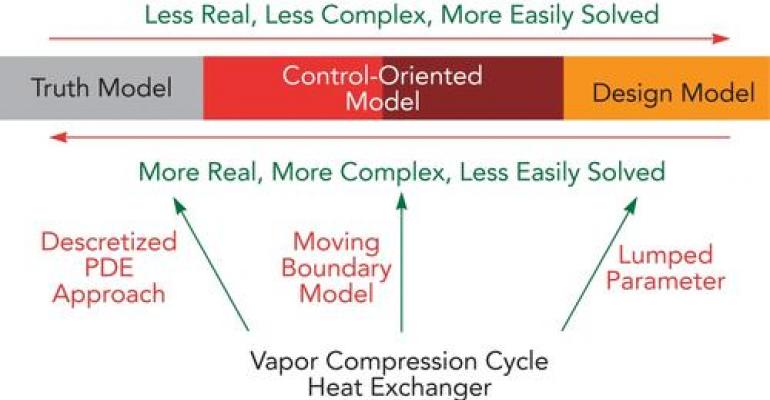 Buildings comprise more than a third of the total energy used in the US, with a carbon footprint greater than the transportation sector. The application of control and automation to buildings can lead to significant energy savings, protect the environment, improve the health and safety of the occupants, and enhance the quality of life.

The most prevalent use of automation in buildings is in HVAC systems -- heating, ventilating, and air-conditioning -- which consume 20 percent of all the energy in the US. A survey of the literature pertaining to controls for HVAC and building systems shows a lack of a systematic dynamic analysis and control design approach. The algorithms usually are based on ad-hoc, table-based rules, which are modified and improved based on field experience rather than rigorous modeling and dynamic analysis.

Second, the system should be as efficient as possible. The enthalpy increase across the compressor represents the amount of work (W) done by the compressor to increase the pressure of the refrigerant vapor. The system coefficient of performance (COP), a measure of system efficiency, is defined as the ratio between the two changes in enthalpy. Maximizing this value is a key systems-level priority since it will minimize energy usage for a given amount of cooling.

In addition, to prevent the possibility of liquid entering the compressor inlet, it is important to maintain a prescribed level of superheated vapor at the exit of the evaporator. The control of superheat and capacity are regulation problems, while the energy use is a minimization problem.

Understanding the complex dynamics of air-conditioning systems is vital to proper control. 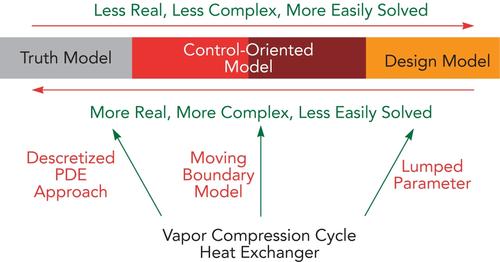 The diagram shows that for any physical system there is a hierarchy of models possible. It is critical to strike a delicate balance between dynamic complexity and accuracy in the model. For the heat exchanger, the moving-boundary model allows the position of the phase change to vary as a function of time and keeps the parameters in each fluid-phase region lumped, resulting in a model of fairly low dynamic order that can accurately predict the behavior of important system outputs that must be controlled to obtain efficient system operation, e.g., superheat and heat exchanger pressure.

It is clear that a mechatronic modeling and control design approach can have a tremendous impact on almost every modern engineering system.